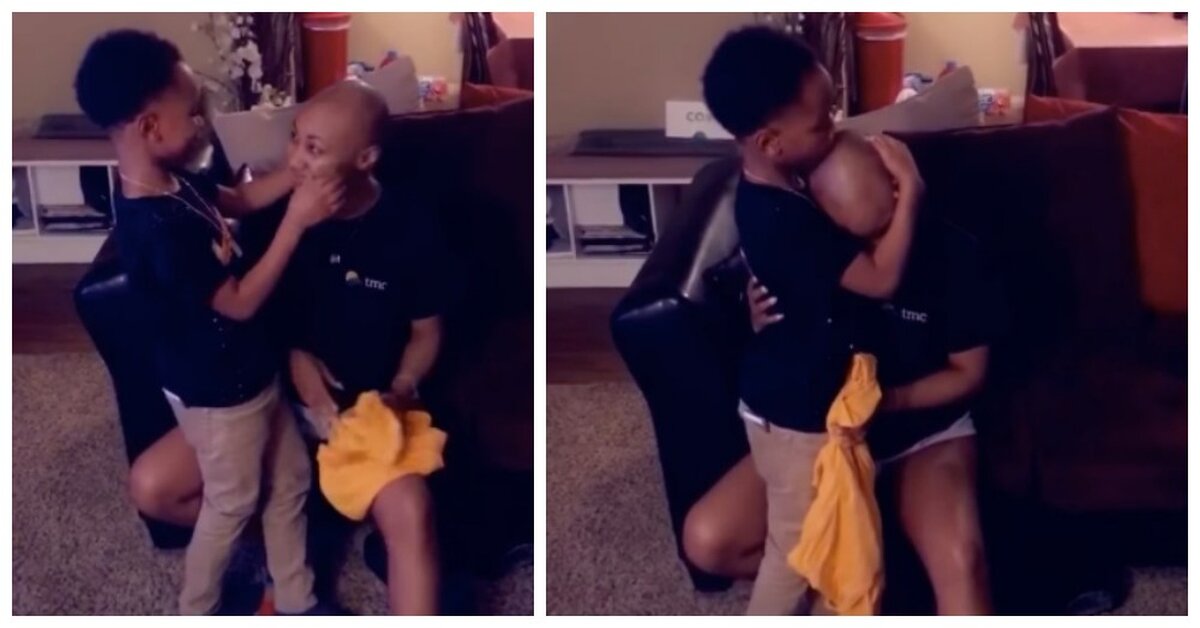 A video has gone viral on Facebook of a sweet young boy encouraging his mom to unwrap the turban around her head.

Neshele Roach was diagnosed with stage IV metastatic breast cancer at age 29 and is undergoing chemo, which caused her to go bald.

In the short video she posted, Roach’s son is kissing his mom’s cheeks and snuggling with her when he pulls back and asks her to take off the wrap covering her bald head. So she starts taking it off and he helps her unwrap it. 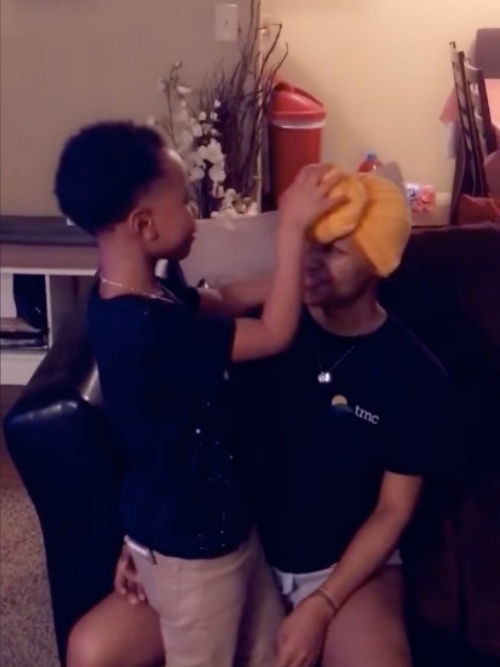 When she pulls it off and smiles up at him, he hugs her and gives her head a bunch of kisses.

It’s the sweetest thing, and the way they look at each other is so touching!

After her video went viral (at the time of this writing, it’s gotten over 77,000 reactions and almost as many shares) Roach shared another video to address some questions about her diagnosis and treatment.

Her first symptom was back pain in July or early August. She assumed she had just strained it somehow, maybe by sleeping wrong or by playing with her son. She couldn’t bend over, but she could still work and sit up straight. She went to a chiropractor and did some back exercises, but nothing helped.

So she lived with the pain for six months. 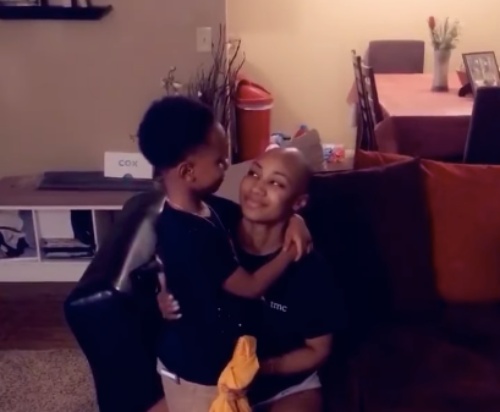 She also began to lose weight. Prior to her illness, she typically weighed between 120 to 125 pounds. Now she weighs 99 to 100 pounds.

She thought the weight loss was due to stress and unrelated to the back pain. Roach takes care of her son, her two nieces who are in college, and her dad, and they all live in the same household.

Eventually, though, in January of 2020, she went to the doctor. They ran some tests, then came back and told her she had fractured her back.

“Y’all, I don’t know how I was walking around for six months with a fractured back, but I did,” Roach said. 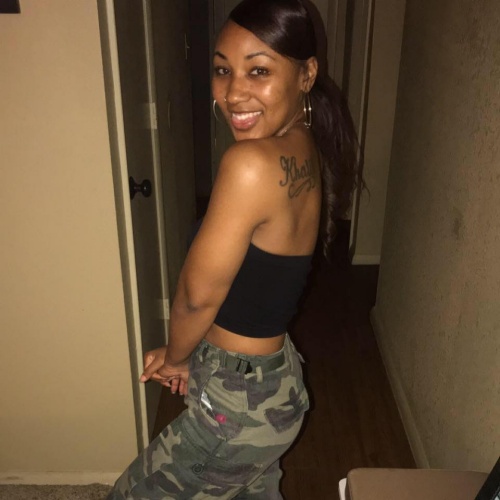 Roach said she hadn’t done anything to cause it — like lifting something heavy — so they ran some more tests. That’s when they discovered she had cancer all over her body.

The cancer had started in her breast. She has three tumors there, as well as tumors in her bone marrow, her ribs, her liver, her pelvic area, and her spine.

She had noticed a bulge in her spine, but she assumed it was due to losing weight, since that can cause your bones to seem more pronounced. 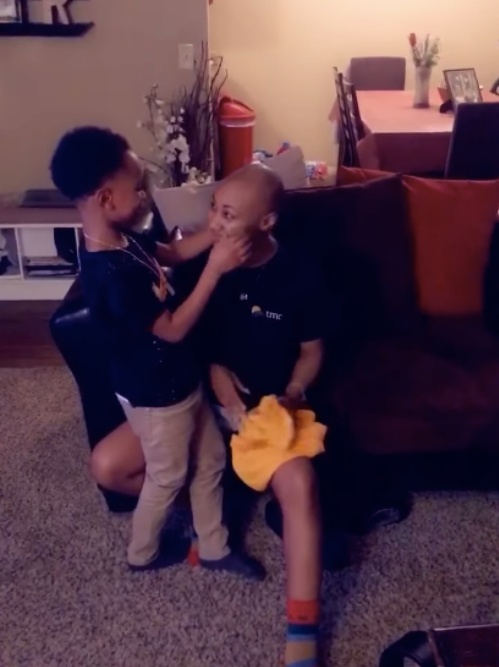 She has triple negative breast cancer, which is not fueled by hormones. It is aggressive, and disproportionately affects African-American women and younger women.

Roach said she isn’t much of a crier, and so she didn’t cry at the hospital — but she cried when she told her son and then again when she told her nieces, who are like her children. She said that the diagnosis was hard to take, but she toughed it out, kept moving forward, and accepted the situation.

She was diagnosed in January and was set to begin chemo in February. Before she began chemo, though, she had three procedures done: kyphoplasty to fill the fracture in her back, a liver biopsy, and implantation of a chemo port in her chest. All were done at the same time.

“Usually people don’t have all three surgeries at one time, but I did. I did have complications but, of course, you know, thank God I came out strong,” she said. “So I’m good.” 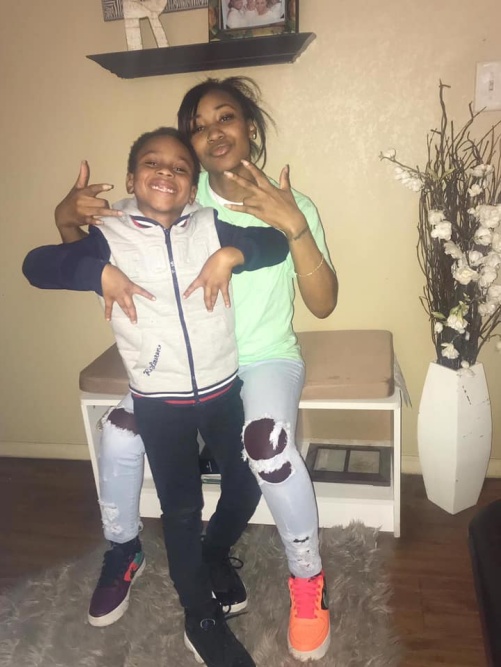 As for chemo, she hasn’t had nausea or trouble keeping food down, which she is thankful for. The first two rounds went great and she experienced no side effects. But around her 30th birthday, about a month after she began treatment, her hair started falling out in clumps. So she decided to shave it all off.

One person who was not on board with her decision was her son.

He wanted her to just get a wig, but Roach assured her he would be fine.

“In that video, he finally started coming around to my head actually being bald. And so when he jumped on me giving me kisses and stuff, he was just like, ‘Take your hair wrap off,’ and I was like, ‘You want me to take my hair wrap off?’ So that’s where it started from, because at first my son was so against me going bald, like, y’all have no idea.” 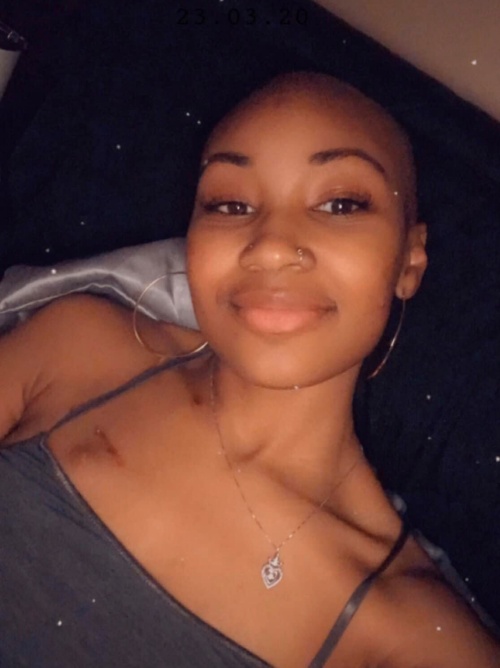 She has chemo treatments every three weeks, and is about halfway through it (she’ll have a total of nine). While the tumor on her spine has shrunk, she won’t know for sure how effective the chemo has been until all nine rounds are over.

We look forward to hearing more from this positive young mom. We wish you all the best, Neshele!