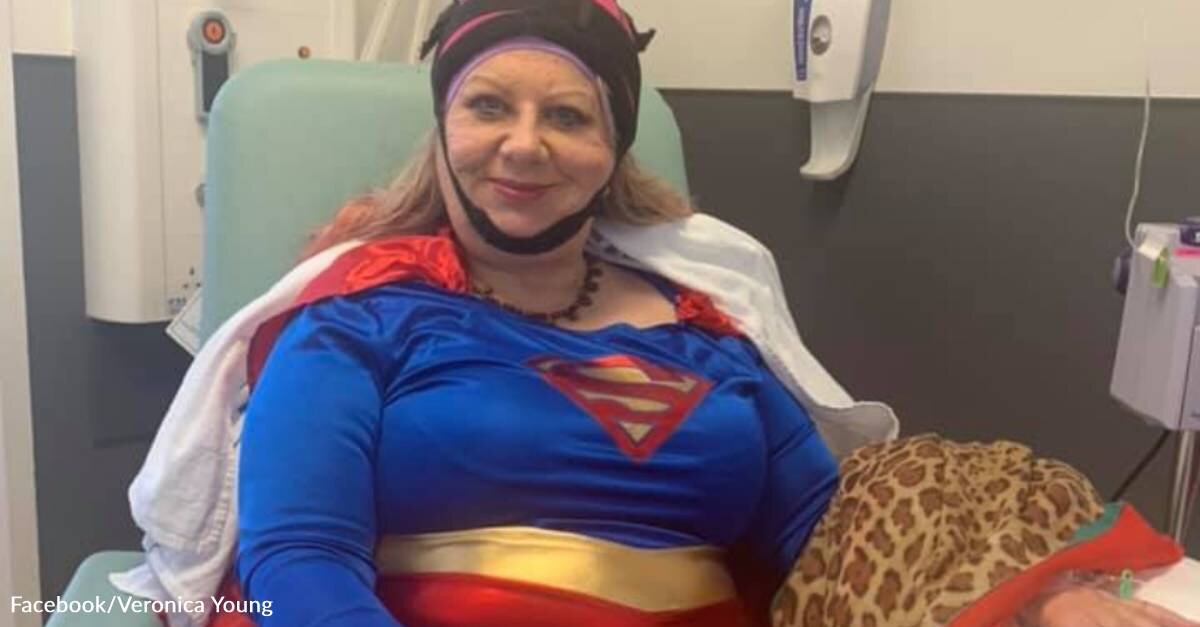 One breast cancer patient is attempting to inspire other women between the ages of 50 to 70 to be brave and take advantage of breast cancer screenings by dressing up as a different superhero for every chemotherapy treatment she undergoes.

57-year-old Veronica Young is battling an aggressive form of breast cancer. Her cancer was diagnosed during a routine NHS screening appointment that she believes saved her life.

“I spoke to one person, and they said they got the letter but didn’t go. You don’t have to go, it’s your choice but I’d definitely say ‘go,’ because it could save your life with early detection,” she says. “If I had not gone, it could have continued to spread elsewhere in the body. Thankfully, that hasn’t happened because it was picked up [early].”

Prior to her diagnosis, Veronica was in great physical condition. During the lockdown in 2020, the mother of two grown children and former military civil servant participated in the Couch to 5K Challenge. She is also an avid cyclist and had a completely clear mammogram for years before, so she was shocked to receive a diagnosis of triple-negative breast cancer.

Tragically, Veronica also received her diagnosis 10 years to the day after losing her father to bladder cancer at the age of 72.

Despite her difficult diagnosis, however, Veronica has continued working full-time helping military veterans who have mental health issues. She has also refused to become a pessimist.

“It was a shock. But almost immediately I was told they are looking at a full recovery, which was reassuring. Nothing is ever guaranteed, but my cup is always half full,” she says.

Veronica hopes dressing up as a superhero will spark some smiles and inspire others to get regular mammograms. She has dressed up as Supergirl, a Christmas “super” elf, and Batwoman during the course of her treatment so far.

“It helps me cope,” she says. “I think the other patients must think I’m nuts. But when I was dressed up as Supergirl, one patient said it was the best chemotherapy session they’d ever had. And if by doing this it persuades someone to go for a breast scan, then that makes me happy.”

With every costume, she wears a cold cap to keep her scalp at -5°C to prevent her hair from falling out.

Along with wearing a costume, Veronica is raising money for a different charity every time she undergoes a treatment session. She’s already raised thousands of dollars for the Macmillan Cancer, SSAFA, and Walking With the Wounded, where she works as a digital care coordinator.

“It’s just who I am. I am always positive, and I enjoy helping people.”

Veronica continues to stay active during her treatment. She completed a 4K run just five days after her first chemotherapy session. She also performs Reiki on herself daily; this Japanese energy healing art is a practice she believes helps minimize chemotherapy side effects.

Veronica is now halfway done with her chemotherapy treatment. This treatment is meant to shrink the size of her tumor before she has surgery to remove it. She may also need radiotherapy in the future.

She’ll be raising funds for the RAF Benevolent Fund and the RAF Association for her next two treatments, but she hasn’t decided which superheroes to be for those treatment sessions yet. Her final costume, wonder woman, is already being made, thanks to her sister.

Thank you, Veronica, for maintaining a positive attitude and being a ray of sunshine on what is for many a dark path through cancer diagnosis and treatment.