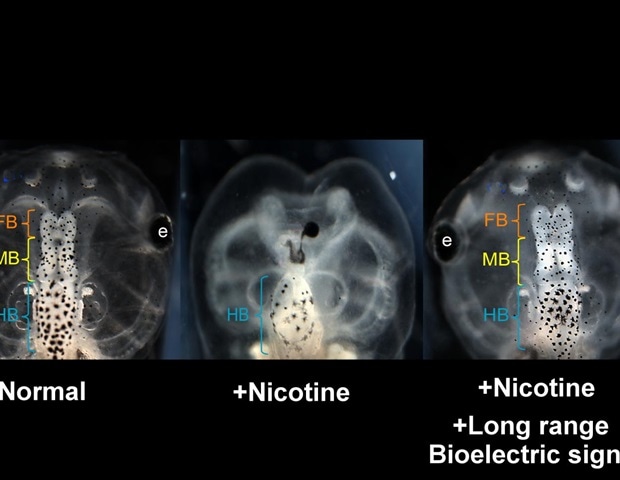 A new study on the frog brain may lead to innovative ways of repairing congenital disabilities in humans.

A team of researchers from Tufts University, Universitat de Valencia, and Harvard University has discovered that the brains of developing frog embryos damaged by nicotine exposure can be repaired by using “ionoceuticals” that can help in the recovery of bioelectric patterns in the embryo.

The study, which was published in the journal Frontiers of Cellular Neuroscience, highlights the possibility of treatment strategies based on restoring the bioelectric blueprint or map for embryonic development. The study may pave the way for developing drugs and therapies to help repair birth defects in the future.

Nicotine induced defects in the frog embryo brain (center) can be rescued by transplanting an HCN2 expressing patch on the embryo far from the brain. Treated embryos are observed to have normal brain morphology and function (right). View of normal embryo head is shown at left. Similar results are seen when nicotine-exposed embryos are treated with ionoceutical drugs. (FB = forebrain; MB = midbrain; HB = hindbrain) Image Credit: Vaibhav Pai, Tufts University

What are bioelectric patterns?

Bioelectrical signals among cells control and guide embryonic brain development. Previous studies have shown that manipulating these signals can repair genetic defects and induce the development of healthy brain tissue.

In a study published in the Journal of Neuroscience in 2015, the same scientists revealed that bioelectric signaling controls the activity of two cell reprogramming factors, which they tested on African clawed frog embryos.

The team found that cells communicate even in long distances in the embryo by using bioelectrical signals. The cells use this data to know where to form a brain and how big the brains should be.

The findings of their current study were based on their previous research on bioelectric signals.

Effects of nicotine on the brain

Now, the team aimed to see how bioelectric signals can help repair the brain damaged by nicotine.

Nicotine is a stimulant and potent parasympathomimetic alkaloid that is naturally produced in the nightshade family of plants. Nicotine is highly addictive. It is one of the most commonly abused drugs. The primary therapeutic use of nicotine is treating nicotine dependence to eliminate smoking.

Earlier studies have shown that nicotine can disrupt the normal electrical patterns in the brain of a growing embryo. It was found that it can reduce the contrast of the bioelectric blueprint, which is a map of different voltage levels around the cells. This map aids and guides the pattern and growth of organs and tissues.

In the study, the researchers applied nicotine to developing frog embryos to generate neural defects. They want to determine the specific interventions that can reverse the harmful effects of the chemical. In the previous study, the team identified one specific element in the natural electric signaling that controls brain development – the hyperpolarization-activated cyclic nucleotide-gated channel-2 (HCN2), which was able to restore the bioelectric patterns.

In 2015, the team tried to repair the defects by using a form of gene therapy that modifies the expression of HCN2. However, in the current study, no gene was used. Instead, the team has found that the same effects can be achieved by using small molecule drugs to stimulate the HCN2 channels that are already present inside the embryo. Next, the team has demonstrated that they can reset the electrical patterning information that oversees brain development from a distant location on the embryo.

Michael Levin, the study author, and a Vannevar Bush Professor of Biology at Tufts University said that the study is a breakthrough in preventing neural tube defects and birth defects in embryos. Further, he added that when the team boosted the expression of HCN2 at a distance from the brain, such as in non-neural regions, they were still able to prevent or repair the defects in the brain.

“The instructions to build a fully grown animal, including organs as complex as the brain, are distributed among all the cells of the embryo. These results suggest that we might not have to target the damaged region directly, and we can use drugs instead of genetic manipulation, which opens a lot of opportunities for biomedical deployment,” Levin added.

The findings of the study have led the scientists to think that there may be a drug that activated HCN2. They can use the drug to prevent defects in the embryo.

At present, two drugs can activate HCN2 – gabapentin, and lamotrigine. They are already FDA-approved and are safe-to-use.

To test their hypothesis, the team exposed the embryos to nicotine and treated them with drugs during the various stages of embryonic development.

“Our results and quantitative model identify a powerful morphogenetic control mechanism that could be targeted by future regenerative medicine exploiting ion channel modulating drugs approved for human use,” the team concluded in the study.