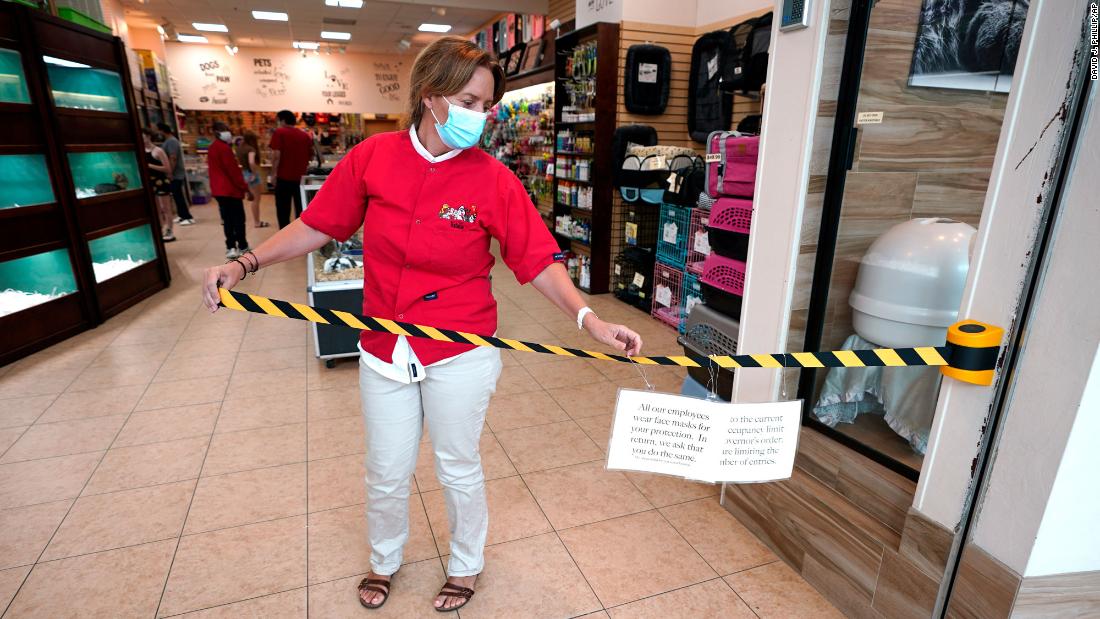 Health, Fitness & Food
Share on Facebook
Share on Twitter
Share on Pinterest
Share on LinkedIn
“To my knowledge, there are no states that meet all four of those criteria,” said Caitlin Rivers, a senior scholar at Johns Hopkins.
She described the four criteria at a House Appropriations Subcommittee on Wednesday:
“The first is to see the number of new cases decline for at least two weeks, and some states have met that criteria. But there are three other criteria and we suggest they should all be met,” Rivers said.
Those include having “enough public health capacity to conduct contact tracing on all new cases, enough diagnostic testing to test everybody with Covid-like symptoms” and “enough health care system capacity to treat everyone safely.”
It will take weeks to learn how many new cases and deaths emerge after states start easing restrictions.
But the US still hasn’t done enough to protect residents from the coronavirus pandemic, said Dr. Richard Besser, former acting director of the Centers for Disease Control and Prevention.
The US must overcome major obstacles to help prevent a resurgence of coronavirus, he said. As of Wednesday, more than 1.2 million people in the US have been infected, and more than 71,000 have died, according to data from Johns Hopkins University.
“We don’t have the testing capacity now to know where this disease is,” Besser said.
“We have not scaled up the thousands and thousands of contact tracers that we need, we don’t provide safe places for people to isolate or quarantine if they are identified as either having an infection or being in contact.”

A coronavirus task force will continue after all

On Wednesday, President Donald Trump said the White House coronavirus task force will continue, despite a senior White House official saying Tuesday that the task force will start winding down later this month.
Vice President Mike Pence had confirmed the White House is considering disbanding the task force as early as Memorial Day.
But Trump tweeted Wednesday that the task force will “continue on indefinitely” and shift its focus to “SAFETY & OPENING UP OUR COUNTRY AGAIN.” Task force members may be added or subtracted “as appropriate,” he said.
“We’re now looking at a little bit of a different form, and that form is safety and opening,” Trump told CNN’s Jim Acosta on Tuesday. “And we’ll have a different group probably set up for that.”
Your top coronavirus questions, answered

By this Sunday, at least 43 states will have eased restrictions — ranging from simply reopening parks to allowing more businesses to reopen.
California Gov. Gavin Newsom, who issued the first statewide stay-at-home order, announced some retailers such as florists and book shops will be allowed to reopen Friday.
“We’re not going back to normal. We’re going back to a new normal, with adaptations and modifications until we get to immunity until we get to a vaccine,” Newsom said.
For the first time since the outbreak began, the weekly count of coronavirus deaths in California has declined, according to data from the state’s health department. The week ending May 3 saw 505 deaths, a slight drop from the prior week’s report of 527 victims.
But the story is very different in Mississippi, where the state had its largest number of reported deaths in a single day, the governor said Tuesday.
Gov. Tate Reeves also said Mississippi has seen its largest numbers of cases reported in a single day twice in the past week.
The news came a day after he announced outdoor gatherings of up to 20 people are allowed starting this week, and dine-in services at restaurants can also resume.
In Texas, where daily cases have generally increased over the past two weeks, Gov. Greg Abbott announced wedding venues can reopen — though ceremonies and receptions held indoors must limit occupancy to 25%. The limits don’t apply to outdoor wedding receptions, the governor’s office said.
And starting Friday, Texas hair salons, nail salons, tanning salons and pools will also be allowed to reopen as long as long as they maintain certain guidelines.
Here’s where all 50 states stand on reopening

‘Wake up, world. Do not believe the rhetoric’

Researchers are discovering new information about how early and how rampantly this coronavirus has been spreading.
A new genetic analysis of the virus taken from more than 7,600 patients around the world shows it has been circulating in people since late last year, and must have spread extremely quickly after the first infection.
“The virus is changing, but this in itself does not mean it’s getting worse,” genetics researcher Francois Balloux of the University College London Genetics Institute told CNN.
At most, 10% of the global population has been exposed to the virus, Balloux estimated.
Such a low percentage means the fight against coronavirus is far from over, said Michael Osterholm, director of the Center for Infectious Disease Research and Policy at the University of Minnesota.
He estimates the novel coronavirus has infected between 5% to 15% of the population and will continue to spread until about 60% to 70% are infected.
“Think how much pain, suffering, death and economic disruption we’ve had in getting from 5% to 15% of the population infected and hopefully protected,” Osterholm said.
“Wake up, world. Do not believe the rhetoric that says this is going to go away.”

Black people are affected disproportionately, possibly due to jobs

While many demographics have been impacted, a new study suggests more African Americans are dying from the virus in the US than whites or other ethnic groups.
Black Americans represent 13.4% of the US population, according to the US Census Bureau. But counties with higher black populations account for more than half of all coronavirus cases and almost 60% of deaths, researchers found.
They compared counties with a disproportionate number of black residents — those with a population of 13% or more — with those with lower numbers of black residents.
Counties with higher populations of black residents accounted for 52% of coronavirus diagnoses and 58% of Covid-19 deaths nationally, they said.
“It’s not that hard to understand why” African Americans are affected disproportionately, said Dr. Jonathan Reiner, a former White House medical adviser under President George W. Bush.
“In the African American community, more folks have to go to work and can’t telecommute,” Reiner said. “In that community, a lot of people work in public-facing jobs, with contact to the public. A lot of people take public transportation to work.”
Besser, the former acting director of the CDC, said such disparities are troubling.
“We are saying, if you have money and you are white, you can do well here,” he said. “If you are not, good luck to you.”
Track the virus in each state and across the US

Dr. Tom Frieden, who led the CDC from 2009 to 2017, laid out “10 plain truths” about Covid-19 when he spoke at a House Appropriations Committee hearing on Wednesday.
“In my 30 years in global public health, I’ve never seen anything like this,” said Frieden, now president and CEO of Resolve to Save Lives. “It’s scary. It’s unprecedented.”
Among Frieden’s 10 truths:
— As bad as this has been, it’s “just the beginning.”
— Data is a “very powerful weapon against this virus,” and using it to monitor trends can help stop the pandemic from getting worse.
— “Never again” should we be so underprepared, Frieden said. “It is inevitable that there will be future outbreaks. It’s not inevitable that we will continue to be so underprepared.”
— Governments and private companies need to work together and make “massive continued investments in testing and distributing a vaccine as soon as possible.”
— “It’s really bad” in New York City. “Even now with deaths decreasing substantially, there are twice as many deaths from Covid in New York City as there are on a usual day from all other causes combined.”
— We must not neglect non-Covid health issues.