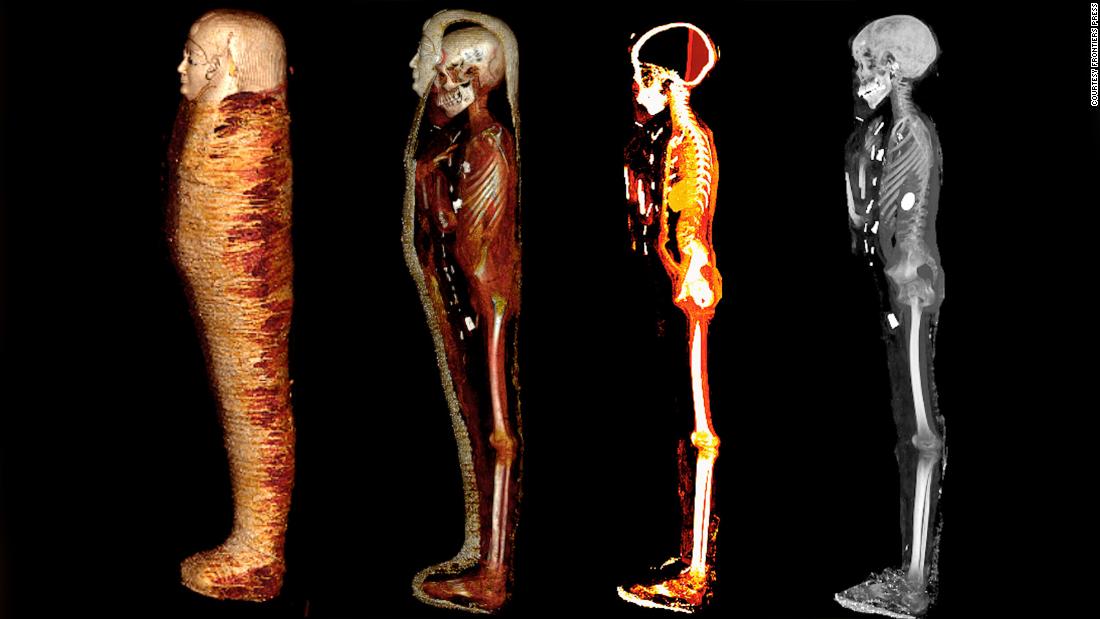 (CNN) — When a teenage boy died 2,300 years ago in Egypt, he was mummified and adorned with 49 protective amulets and a golden mask to guide him in the afterlife.

Researchers discovered the amulets placed on and inside the body of the mummified “golden boy” when they used computerized tomography scans to digitally unwrap the remains without disturbing them.

The remains were first uncovered in 1916 at a cemetery called Nag el-Hassay used between approximately 332 BC and 30 BC in southern Egypt. Thousands of preserved bodies, many still inside their original coffins, were excavated in Egypt in the 19th and early 20th centuries before being moved to the Egyptian Museum in Cairo.

Like many others, the mummy remained unexamined upon its discovery and was moved into the museum’s basement.

CT scans were used to virtually unwrap the mummified remains.

Although researchers are interested in learning more about ancient human health, as well as the death rites and beliefs of ancient Egyptians, unwrapping mummified remains is a destructive process. In recent years, researchers have used CT scans to peer beneath the wrappings while leaving the bodies entirely intact.

The golden boy’s remains were stored inside two nested coffins. The outer coffin was plain and inscribed with Greek letters, while the inner wooden sarcophagus bore patterns and a gilded face.

When researchers scanned the mummy, they spotted 49 amulets with 21 different designs, including a golden tongue placed inside the mouth and a golden heart scarab located in the chest, which ancient Egyptians believed could aid in transition to the afterlife.

The young man, thought to have been between 14 and 15 years old, also wore a gilded head mask inlaid with stones and a protective covering called a cartonnage across his torso. All of his organs had been removed, with the exception of his heart, and his brain replaced with resin.

Journey to the afterlife

Ancient Egyptians believed that another life awaited after death, but reaching the afterlife required a dangerous journey through the underworld. Embalmers took care to prepare bodies for this passage, and the golden boy was well-equipped for the trip, according to a study published Tuesday in the journal Frontiers in Medicine.

Scanning revealed the face of the golden boy, which hasn’t been seen for 2,300 years.

“Here we show that this mummy’s body was extensively decorated with 49 amulets, beautifully stylized in a unique arrangement of three columns between the folds of the wrappings and inside the mummy’s body cavity. These include the Eye of Horus, the scarab, the akhet amulet of the horizon, the placenta, the Knot of Isis, and others. Many were made of gold, while some were made of semiprecious stones, fired clay, or faience. Their purpose was to protect the body and give it vitality in the afterlife,” said study author Dr. Sahar Saleem, a professor at the Faculty of Medicine of Cairo University, in a statement.

White sandals had been placed on his feet, while his body was wreathed with ferns.

The mummy was found wearing sandals.

“The sandals were probably meant to enable the boy to walk out of the coffin. According to the ancient Egyptians’ ritual Book of The Dead, the deceased had to wear white sandals to be pious and clean before reciting its verses,” Saleem said. “Ancient Egyptians were fascinated by plants and flowers and believed they possessed sacred and symbolic effects. Bouquets of plants and flowers were placed beside the deceased at the time of burial.”

Although the scans did not illuminate his cause of death, they did reveal the boy was 4.2 feet (128 centimeters) tall and had an oval-shaped face with a small nose and narrow chin.

His identity remains unknown, but his good dental hygiene, the high quality of his mummification and the amulets suggest he was of high socioeconomic status, according to the study.

Amulets were placed on the body and tucked inside it.

The golden tongue amulet placed in the boy’s mouth was meant to help him speak in the afterlife. An Isis Knot amulet signified that the goddess Isis would protect his body. Amulets of falcons and ostrich plumes represented the spiritual and material aspects of life.

A two-finger amulet, shaped like the index and middle fingers of the right hand, was found in his lower torso to protect his embalming incision. And the golden scarab beetle was thought to help in the arduous underworld.

A golden scarab beetle amulet was found inside the chest cavity.

“The heart scarab is mentioned in chapter 30 of the Book of the Dead: it was important in the afterlife during judging the deceased and weighing of the heart against the feather of the goddess Maat,” Saleem said. “The heart scarab silenced the heart on Judgement Day, so as not to bear witness against the deceased. It was placed inside the torso cavity during mummification to substitute for the heart if the body was ever deprived of this organ.”

By collecting data using the CT scans, the researchers were able to 3D-print a copy of the heart scarab.

The golden boy has been moved to the main exhibition hall of the Egyptian Museum and will be surrounded by CT images and the copy of the heart scarab to provide more insight into the mummification process, and the death rites of ancient Egyptians.

“The display’s goal was to humanize this individual from the past to teach modern people about life in ancient times,” the researchers wrote in the study.