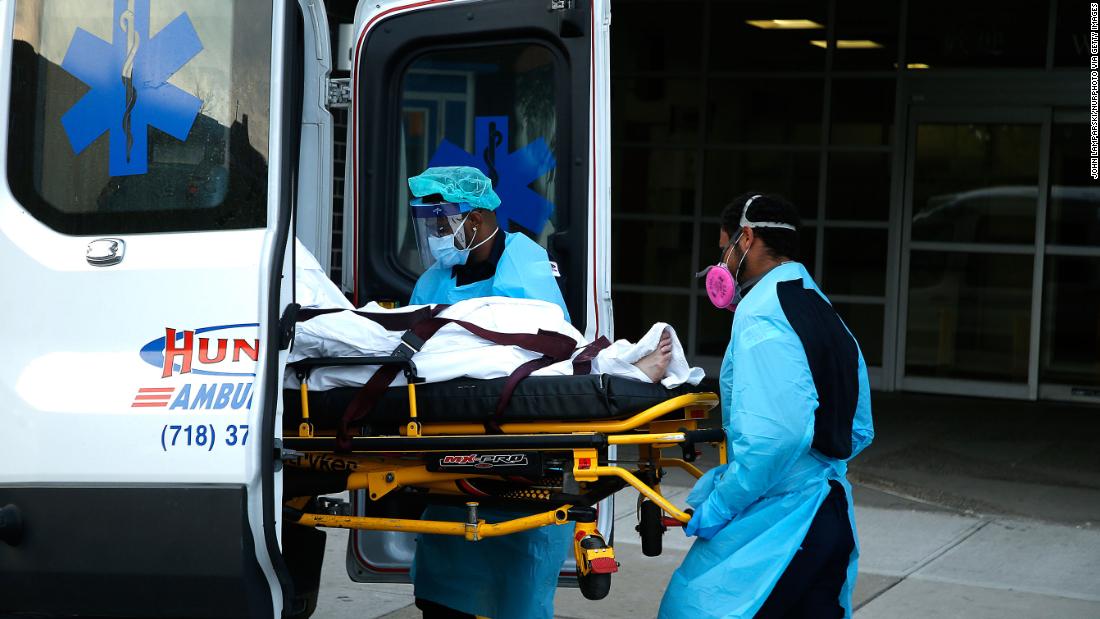 Health, Fitness & Food
Share on Facebook
Share on Twitter
Share on Pinterest
Share on LinkedIn
There are at least 1,002,498 cases of the virus across the US, according to a tally from health officials by John Hopkins University.
The grim milestone comes after seven coronavirus models anticipate a rise in cases that will depend on how much “contact reduction” Americans practice, the Centers for Disease Control and Prevention said.
The models estimate the numbers of cases and deaths on the state and national levels, and one model from the University of Texas at Austin makes metro-area projections.
Your top coronavirus questions, answered
“State-level forecasts vary widely, reflecting differences in early epidemic phases, timing of interventions and model-specific assumptions,” the CDC says.
Models that factor in strong contact reduction suggest deaths will continue to occur, but will “slow substantially over the next four weeks,” the CDC said.
“Conversely, models that do not incorporate as strong contact reductions … suggest that total deaths may continue to rise quickly.”
One model frequently cited by the White House coronavirus task force has upped its predicted death toll again, this time projecting 74,000 Americans will lose their lives to the virus by August.
The projection was adjusted because of longer peaks in some states and signs that people are becoming more active again, according to Dr. Chris Murray, director of the University of Washington’s Institute for Health Metrics and Evaluation.
Last week, the model projected 67,641 deaths from Covid-19.
States including Georgia, Texas, Michigan, Hawaii and Alaska have started reopening, while Alabama isn’t far behind.
California Gov. Gavin Newsom said his state is weeks away from changing its stay-at-home order — yet beaches in the southern part of the state were packed with thousands of people over the weekend. Massachusetts will extend its stay-at-home order and closure of nonessential businesses until May 18, Gov. Charlie Baker said.
“It’s a safer strategy to get the number of infections in the community down to a really low level, and then testing and contact tracing and isolation can work,” Murray said Monday.
Georgia, which Murray’s team warned shouldn’t begin reopening until June 28, started reopening small businesses Friday.
Gov. Brian Kemp said Georgia is “moving forward with data and information and decisions from the local public health officials, meeting and working within the guidelines of the great plan that the President has laid out.”
Under Trump’s own proposal for states to reopen in phases, Georgia does not meet the “gating” criteria.
Among the guidelines for “Opening Up America Again,” states shouldn’t start to reopen until they have a downward trajectory of documented cases in a 14-day period or a downward trajectory of positive tests as a percent of total tests in a 14-day period.
“We didn’t meet the full gating criteria, but we met several of them and we were approaching a plateauing, which made us feel that it would be safe to move forward because we had three things in place,” said Dr. Kathleen Toomey, commissioner of the Georgia Department of Public Health.
The select criteria were adequate hospitalization, testing capacity and an increasing contact-tracing capacity, Toomey said.
As more governors start reopening their states and others set the date, they’re pushing to get a better idea of how hard their state has been hit through antibody testing.
Experts warn there’s still a lot researchers don’t know about the accuracy of the tests, and the World Health Organization has cautioned that no evidence exists yet that antibodies prevent a second infection.
Dr. Anthony Fauci, director of the National Institute of Allergy and Infectious Diseases, said he is encouraged that Covid-19 will respond well to a vaccine, once one is available, because there is evidence that patients “can mount a natural immune response,” he said.
“There’s no guarantee,” he said, “but the fact that the body can do it gives me cautious optimism.”

Some cities and states will start testing residents who don’t have symptoms to better understand how many people have been infected.
Los Angeles County will expand coronavirus testing Tuesday to include delivery drivers, rideshare drivers and taxi drivers — even if they feel fine, Los Angeles Mayor Eric Garcetti said.
“These are folks that are on the frontlines, helping us get to where we need to go, helping us have food delivered to our homes,” he said.
In Boston, 1,000 asymptomatic residents will undergo diagnostic and antibody testing by Friday to evaluate exposure to the virus in the city, Mayor Martin Walsh said.
Georgia public health workers will start visiting randomly selected homes in two of Georgia’s largest counties to conduct antibody testing through blood samples. The program is voluntary.
In New York, about 15% of the 7,500 people who have been tested in the state’s antibody study have tested positive, Gov. Andrew Cuomo said.
Those tests are “not ready for prime time,” a former acting director of the CDC told Stat, a health news website.
“As we learn whether that means you are protected in the future, there could be value in that,” Dr. Richard Besser told Stat, but “the science isn’t there yet to be able to say what those tests mean.”
“I worry that people will get a false sense of security and they can change their behavior based on the results of that test, or have a false sense of concern if it’s a test that isn’t detecting protections that they may actually have.”
Though it’s unclear when New York City’s schools will reopen (a decision is expected by week’s end), the city is adopting a special grading system to accommodate home learning and will stage a special citywide virtual graduation, Mayor Bill de Blasio said.
“You may not have the traditional ceremony that you were looking forward to, we’re going to give you something you’re going to remember for the rest of your life and you will cherish,” he said.

States gear up to reopen in coming weeks

Meanwhile, some governors are moving forward with reopening their economies.
Alabama will replace its stay-at-home order with a safer-at-home mandate beginning Thursday at 6 p.m., allowing employers and beaches to reopen “subject to good sanitation and social distancing rules,” Gov. Kay Ivey said.
Florida Gov. Ron DeSantis on Wednesday will outline reopening plans, he said during an Oval Office meeting with President Donald Trump.
Missouri will start next week, with some statewide restrictions set to be lifted Monday, Gov. Mike Parson said.
“Our plan is working, the health care system is not overwhelmed and we are winning the battle,” the governor said.
Under the governor’s plan, any business can reopen as long as 6 feet of social distancing can be maintained, and indoor retail businesses will have to limit their number of customers to no more than a quarter of their normal capacity.
In Kentucky, after the state started loosening restrictions for some health care services, the governor said the next phases of reopening will be announced week by week — with more restrictions loosened weekly, starting May 11.
Gov. Greg Abbott said he will allow his stay-at-home order for Texas to expire April 30. A new order will include an initial first phase of reopening that allows businesses such as retail stores, malls, restaurants and theaters to open Friday with 25% occupancy.
Wisconsin’s Department of Natural Resources intends to reopen 34 state parks, forests and recreational areas Friday with special conditions to minimize overcrowding and allow for social distancing, Gov. Tony Evers said.