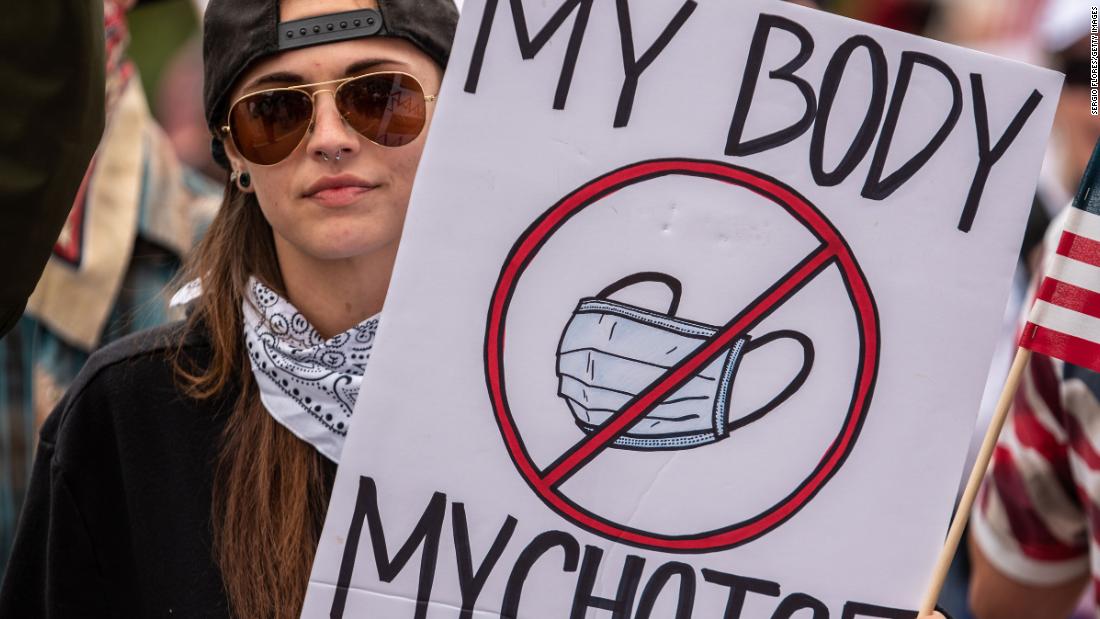 Health, Fitness & Food
Share on Facebook
Share on Twitter
Share on Pinterest
Share on LinkedIn
But he urges Americans to think of the mask guidance not as forced conformity, but as a necessary act of solidarity: Wearing a cloth mask could stop seemingly healthy people from infecting others with coronavirus if they’re asymptomatic.
“We’re all hopeful that this pandemic disappears,” he said. “Then we can stop doing as much risk mitigation. But for now, we really depend on the trust and kindness of others to protect our wellbeing. And that’s part of being an American.”
READ MORE: How to make your own face mask, whether or not you know how to sew

Some think it infringes on their civil liberties

Even though wearing masks isn’t compulsory in much of the US, adhering to these rules may feel like, to some, a forfeiture of their freedoms.
People naturally rebel when they’re told what to do, even if the measures could protect them, said Steven Taylor, a clinical psychologist and author of “The Psychology of Pandemics.”
“People value their freedoms,” he said. “They may become distressed or indignant or morally outraged when people are trying to encroach on their freedoms.”
Aronoff compared the mask guidance to the ban on smoking cigarettes in restaurants or schools.
“There are rules about not smoking in enclosed restaurants and bars because that smoke can be deleterious to someone else’s health,” he said. “Now we’re in a situation where, if I’m infected with the Covid-19 virus, my breath can be lethal to someone else.”
But while that legislation is permanent, wearing masks won’t be, Aronoff said.
But to vocal opponents, even temporary guidance is too much of a concession.
In Michigan, where up to 700 protesters recently descended on the state Capitol to protest stay-at-home orders, masks are required in stores and businesses. This month, police say a Michigan Family Dollar security guard was shot and killed by customers who he’d asked to wear masks before entering the store.
Also in Michigan, a customer wiped his face on a Dollar Tree employee’s shirt after police say the employee told him to wear a mask.
And within a day of issuing an emergency proclamation requiring masks, the city of Stillwater, Oklahoma, amended the proclamation after citizens threatened violence.
“Many of those with objections cite the mistaken belief the requirement is unconstitutional, and under their theory, one cannot be forced to wear a mask,” city manager Norman McNickle said in a statement. “No law or court supports this view.”

Some think it could make them look weak

To some, wearing a mask means admitting a fear they may not have consciously confronted yet, said David Abrams, a clinical psychologist and professor of social and behavioral science at New York University’s School of Global Public Health.
Many view the mask as a walking symbol of vulnerability that tells others you’re scared about contracting the virus. So to compensate for that fear, and as a show of strength, they may reject the masks entirely, he said.
READ MORE: How to stop your glasses from fogging up when you wear a mask
To the people who choose not to wear them, “Putting on that mask is about as blatant as saying, ‘Hey, I’m a scaredy cat,'” Abrams said.
But this moment in history is scary, he said, and even though fear is natural, many of us dare not deign to show it.
We may owe that particular trait to our animal ancestors — in the mammalian world, species disguise fear and don’t show it with other species to keep themselves safe. It’s an evolutionary trait that might explain our tendencies today, when our collective security is threatened, he said.

Some find the guidance confusing

Within three months, masks went from unnecessary for healthy people to recommended for anyone who goes out in public. The conflicting guidance has given Americans a bit of whiplash.
But that guidance has changed when researchers learned about the high probability of asymptomatic transmission. Wearing a cloth mask isn’t foolproof, but if someone is infected and doesn’t know it, the mask prevents their breath from traveling far and potentially infecting others.
“It’s confusing for us frontline health care workers, too,” Aronoff said.
And people who followed the CDC’s initial advice — to avoid wearing a mask if you’re healthy — may have felt cheated or wronged when the CDC recommended them in mid-April.
There are also mixed messages at the federal level: While the CDC recommends the public wear masks, President Donald Trump didn’t wear a mask during a visit to a Honeywell mask factory. Vice President Mike Pence apparently flouted hospital policy when he visited the Mayo Clinic without a mask on.
All that muddles the message even further for Americans, Abrams said.
“The ambivalence of mixed messages makes it far easier for people to do whatever they want and make up their own mind,” he said.

Some find it uncomfortable

In the presence of uncertainty, people tend to seek out rituals that make them feel secure. For many Americans, wearing masks in public isn’t one of those, Abrams said.
“When people are told what to do, and it’s not the conforming, usual way to behave, there’s a tendency to question that and to resist,” he said. “It’s the psychological tendency to react to people telling you what to do.”
Up until this point, Americans haven’t been asked to wear masks in public. It’s a phenomenon they may associate with some east Asian countries, where wearing face masks in public is widely accepted and perhaps a reason why some of those countries have been successful in reining in outbreaks.
“If everybody started wearing masks, suddenly, the old way of life is gone,” he said. “You’ve suddenly admitted that this is the new normal. But you don’t want to believe that.”
Not to mention, masks aren’t physically comfortable either. That may be enough to steer some people away from them.

MicroRNAs play a key role in the development of complex brains
Discover the art of forgiveness and how it can benefit your wellbeing
Tears for Fears: Juvenile mice secrete protective pheromone
Lessons Learned From Hiding My Type 1 Diabetes
Our Biggest Health Insurance Concern Isn’t What You Think