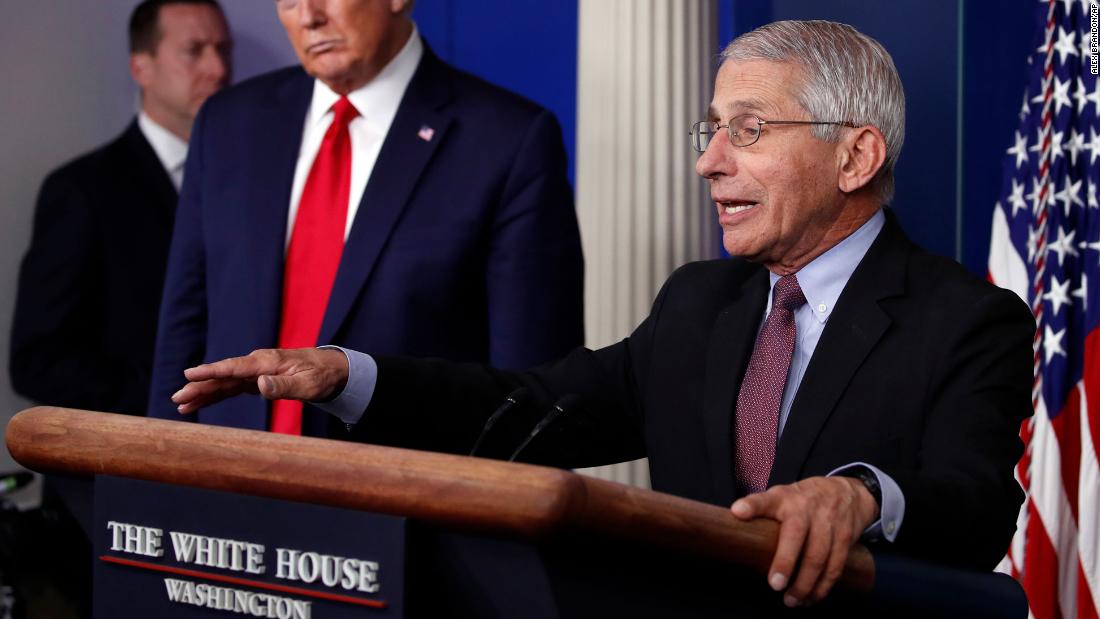 Health, Fitness & Food
Share on Facebook
Share on Twitter
Share on Pinterest
Share on LinkedIn
“If by that time we have put into place all of the countermeasures that you need to address this, we should do reasonably well,” Dr. Anthony Fauci said. “If we don’t do that successfully, we could be in for a bad fall and a bad winter.”
If states begin lifting restrictions too early, Fauci says he predicts the country could see a rebound of the virus that would “get us right back in the same boat that we were a few weeks ago,” adding that the country could see many more deaths than are currently predicted.
So far, more than 1 million Americans have been infected and at least 58,355 have died. A leading model predicts more than 72,000 people will die in the US by early August.
Being able to test for the virus, track cases and isolate every infected American will be key factors in ensuring that second wave isn’t as deadly, Fauci says.
The US continues to lag behind in testing, according to a new report by the Organization for Economic Cooperation and Development. The nation has performed 16.4 tests per 1,000 people, according to the report. Spain and Italy, with the second and third highest number of cases after the US, have conducted 22.3 and 29.7 tests per 1,000 people respectively.
Fauci says the federal government needs to provide strategic guidance and assistance to help states up their number of conducted tests. He hopes he can guarantee everyone who needs a test can get one by the end of May or early June.
“The truth is that we’re going in the right direction,” he said. “But we need to continue to partner in a very active collaborative way with the states, we need to help them the same way they need to do the execution.”
Your coronavirus questions, answered

How reopenings will affect virus numbers

In Georgia, where Gov. Brian Kemp began lifting restrictions on small businesses such as salons and bowling alleys last week, experts say the death toll will likely see a sharp rise as a result.
“There are a couple of conditions that really need to be met before you can safely lift social distancing restrictions,” CNN Medical Analyst Dr. Celine Gounder said Tuesday.
Those factors include a 14-day decline of cases and deaths, a hospital capacity for expected patients and the ability to do contact tracing and testing, she said.
“Georgia doesn’t meet any of the criteria,” Gounder added.
Youyang Gu, the researcher behind one of the models shared by the US Centers of Disease Control and Prevention, projects the number of daily deaths in the state will nearly double by early August.
The model assumes social distancing will relax slightly as the state continues to reopen. The number of deaths per day in Georgia will jump from 32 fatalities on May 1 to a projected 63 people dying each day by August 4, the model forecasts.
The researcher’s findings fall in line with what’s predicted by another model that’s often been cited by the White House.
Dr. Chris Murray, director of the University of Washington’s Institute for Health Metrics and Evaluation, said they’ve upped their August death toll for the US by about 7,000 since last week.
The change, Murray says, comes from both longer peaks experienced by states and signs that states are becoming more active again.
Some businesses in South Carolina, Alaska and Oklahoma reopened last week. Restaurants in Tennessee opened with restrictions this week while retails outlets will open at 50% capacity Wednesday.
Texas Gov. Greg Abbott announced all retail stores, restaurants, movie theaters, malls, museums, and libraries will be allowed to reopen Friday but must remain at 25% capacity.

Since officials have now recommended Americans wear face masks in public to prevent further spread, some airlines say they’ll provide the masks for passengers.
American Airlines and United Airlines both said they’ll be providing masks for passengers beginning in May.
“We are not mandating that passengers wear a mask however we strongly encourage travelers follow CDC guidance to wear a face covering when social distancing is difficult,” United Airlines spokesperson Nicole Carriere told CNN. “By providing the masks, we’re making it that much easier for them to do so.”
Meanwhile, in three major New York City area airports, terminal access will be restricted to ticketed passengers, airport employees and others who need to enter the airport for business, the Port Authority of New York and New Jersey announced Tuesday.
The measure will be enforced at John F. Kennedy Airport, LaGuardia Airport and Newark Liberty Airport.
“Due to Covid-19 related shifts in flight and passenger activity, changes in the airports’ operational footprints, security, cleaning and maintenance protocols, and social distancing directives, the Port Authority will temporarily limit terminal access at the region’s three major airports,” the Port Authority said in a statement.

Women, Individuals With High BMI May Face Greater Risk Of Long COVID: Study
Breaking the barriers of ‘I can’t’ to embrace new opportunities
A quarter of locked-down children may have poor mental health
You Just Got into Medical School. Now What?
Virtual Yoga Program Appears to Improve IBS Symptoms