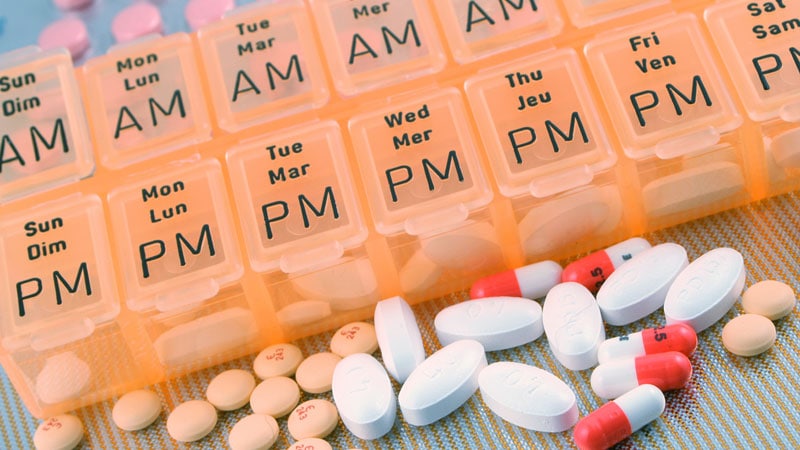 Some patients aged 80 or older can potentially cut back on their number of antihypertensive meds, under physician guidance, without an important loss of blood pressure (BP) control, conclude researchers based on their randomized multicenter trial.

Deprescription of 1 of at least 2 antihypertensive meds in such patients was found noninferior to usual care in keeping systolic BP below 150 mm Hg at 12 weeks, in the study that randomly assigned only patients whose primary care physicians considered appropriate for BP-med reduction.

Major trials that have shaped some contemporary hypertension guidelines, notably SPRINT, in general have not included such older patients with hypertension along with other chronic conditions, such as diabetes or a history of stroke. So, “it’s difficult to know whether their data are relevant for frail, multimorbid patients. In fact, the guidelines say you should use some clinical judgment when applying the results of SPRINT to the kind of patients seen in clinical practice,” James P. Sheppard, PhD, University of Oxford, United Kingdom, told theheart.org | Medscape Cardiology.

The current study, called Optimising Treatment for Mild Systolic Hypertension in the Elderly (OPTIMISE), entered “patients in whom the benefits of taking blood pressure-lowering treatments might start to be outweighed by the potential harms,” Sheppard said.

The trial is meant to provide something of an otherwise-scant evidence base for how to deprescribe antihypertensive medications, said Sheppard, who is lead author on the report published May 25 in the Journal of the American Medical Association.

Of the trial’s 282 patients randomly assigned to the drug-reduction group, 86.4% reached the primary endpoint goal of systolic BP less than 150 mm Hg, compared to 87.7% of the 287 patients on usual care, a difference which in adjusted analysis met the predetermined standard for noninferiority.

The intervention group reduced its number of antihypertensive agents by a mean of 0.6 per patient, which the authors describe as “a modest reduction.” However, they note, drugs that were taken away could be reintroduced as judged necessary by the physicians, yet most of the group sustained their reductions until the end of the 12 weeks.

Had the primary endpoint instead specified a threshold of 130 mm Hg for BP control, which is more consistent with SPRINT and some guidelines in the United States, “the deprescribing strategy would have failed to be considered noninferior to usual care,” as calculated by the OPTIMISE authors themselves, observes an accompanying editorial.

“Here in the UK it wouldn’t be considered a low bar,” Sheppard said in an interview. The National Institute for Health and Care Excellence guidelines in Britain “recommends that you treat people over the age of 18 regardless of whether they have any other conditions, and to 150 mm Hg systolic.”

The study’s general practitioners, he said, “did what we told them to do, and as a result, two thirds of the patients were able to reduce their medications. If we had a lower threshold for treatment, it’s possible that more patients might have had medications reintroduced. I think you still could have potentially ended up with a noninferior result.”

Participating physicians were instructed to enroll only “patients who, in their opinion, might potentially benefit from medication reduction due to 1 or more of the following existing characteristics: polypharmacy, comorbidity, nonadherence or dislike of medicines, or frailty,” the report notes.

They chose which antihypertensives would be dropped for each patient and “were given a medication reduction algorithm to assist with this decision.”  Physicians also followed a guide to monitoring for safety issues and were told to reintroduce medications if systolic BP exceeded 150 mm Hg or diastolic BP rose above 90 mm Hg for more than 1 week, or in the event of adverse events or signs of accelerated hypertension, the group writes.

The corresponding adjusted mean change in diastolic BP was a 2.2 mm Hg increase in the intervention group (P = .001).

Although the difference seems minimal, write Peterson and Rich, “such differences in BP can potentially lead to long-term differences in outcomes at the population level.”

Also, they pointed out, only about 10% of patients screened for enrollment actually entered the study, questioning the study’s generalizability, and “patients in the trial had relatively well-controlled BP at baseline.”

Sheppard said patients in the original screened population, taken from a national database, were directly invited to participate en masse by conventional mail, based on broad inclusion criteria. Far more than the number needed were invited, and nearly all of those excluded from the study had simply not responded to the invitation.

As for greater increases in systolic and diastolic pressures in the deprescribing group, the OPTIMISE authors acknowledge that “caution should be exercised when adopting this approach in routine clinical practice.”

His own view, Sheppard said, “is that there are some patients who will definitely benefit from intensive blood pressure lowering like you saw in the SPRINT trial. And there’s other patients who will benefit from deprescribing and having a slightly higher target. Those sorts of things very much need to be individualized at the patient level.”

And ideally, he added, clinicians in practice should probably be even more selective in choosing patients for a deprescribing strategy, “and focus on people who are at the highest risk of adverse events.”

Covid cases more than doubled in South Africa last week as omicron variant spreads, WHO says
Omicron: Why The WHO Designated It A Variant Of Concern
‘We Have the Best Vaccine in the World’: What We Heard This Week
Feds Go on Offense Ahead of Potential Omicron Spread in US
No Abortion Surge After Mifepristone Restrictions Dropped in Canada