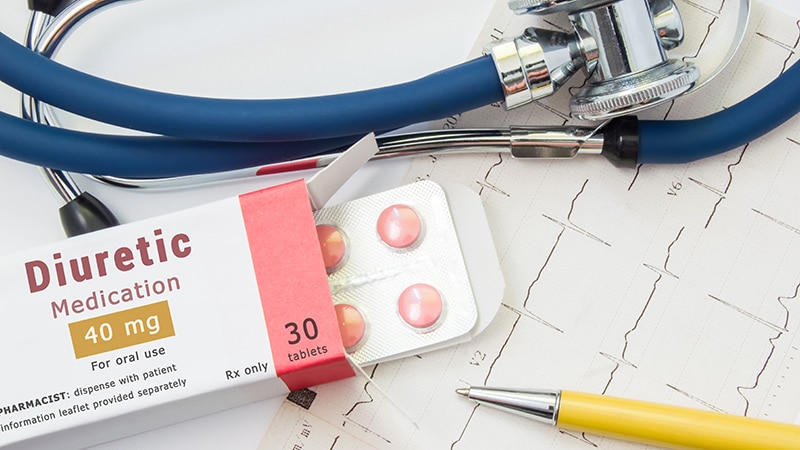 The DAPA-HF trial has already changed cardiology in opening up a new class of drugs to patients with heart failure (HF), whether or not they have diabetes. Now the trial is yielding clues as to how it benefits them. For now, it’s doing so by process of elimination.

A new analysis suggests that dapagliflozin (Farxiga, AstraZeneca) didn’t need help from loop diuretics to cut the risk for clinical events in patients with HF with reduced ejection fraction (HFrEF), a benefit seen across the spectrum of glycosylated hemoglobin levels and without compromising renal function, say DAPA-HF investigators.

Also, use of dapagliflozin and its clinical effects were not associated with changes in loop diuretic dosage.

Those findings and others suggest the drug helps in HFrEF at least partly by some other mechanism than its own diuretic effect, the researchers say.

Such insights will likely be important to case-by-case decisions on whether to use the drug, a sodium-glucose cotransporter 2 (SGLT2) inhibitor once reserved for patients with diabetes, given the recently broader landscape of HF treatment options.

As previously reported from DAPA-HF, with more than 4700 patients, those who received dapagliflozin showed significant reductions in the primary end point, a composite of cardiovascular (CV) death, HF hospitalization, and urgent HF visit requiring IV therapy over about 18 months. The 45% of patients with and 55% without type 2 diabetes enjoyed about equal benefit in the placebo-controlled trial for that end point, as well as for all-cause mortality.

SGLT2 inhibitors work in diabetes by promoting urinary glucose excretion. That had led some to speculate that its benefit in HFrEF comes primarily from a diuretic effect; the current findings largely put that question to rest.

“Our findings show that treatment with dapagliflozin was effective regardless of diuretic use or diuretic dose. They also show that dapagliflozin did not lead to an increase in renal adverse events or discontinuation of therapy in patients treated with a diuretic,” trialist Alice M. Jackson, MB, ChB, told theheart.org | Medscape Cardiology.

“In fact, renal adverse events were generally less common in patients treated with dapagliflozin, across the diuretic categories,” said Jackson, from the University of Glasgow, United Kingdom.

Jackson presented the new analysis June 5 at a Late-Breaking Science Session during HFA Discoveries, the online substitute for the annual scientific meeting of the Heart Failure Association (HFA) of the European Society of Cardiology. The HFA sessions were conducted virtually this year due to the COVID-19 pandemic.

At baseline, 84% of patients were on conventional diuretics. The post hoc analysis broke out all patients by loop-diuretic dosage level: none; less than 40 mg furosemide equivalents (FE); 40 mg FE; or more than 40 mg FE. Clinical outcomes were similar across the four groups.

Clinicians in the trial “were not given specific advice about adjusting diuretic doses, but were encouraged to assess volume status and make changes to medical therapy based on this, if necessary,” Jackson said.

“This suggests that, for most patients, starting dapagliflozin will not necessitate a change in diuretic dose.”

With the caveat that the event rate was low in the relatively few patients not prescribed loop diuretics, she said, “the magnitude of the benefit from dapagliflozin appeared to be larger in patients not treated with a diuretic.”

There was no suggestion of a diuretic dose–response effect or statistical interaction between diuretic use and clinical outcomes on dapagliflozin, Jackson observed in the interview.

Of note in the analysis, hematocrit levels shot up soon after patients started active therapy, but they didn’t rise much in the placebo group. The sustained hematocrit elevation on dapagliflozin, seen at all diuretic dosage levels, persisted even after dosage reductions at 6 months, she said.

The findings also “lessen the concern that dapagliflozin’s beneficial effects are only seen in patients without effective diuretic dosing,” said Coats, from University of Warwick, Coventry, United Kingdom.

“Altogether, these data give further reassurance that dapagliflozin can safely be used in heart failure, and has a beneficial effect independent of the use of diuretic drugs,” invited discussant Wolfram Doehner, MD, PhD, Charité-Universitätsmedizin Berlin, said after Jackson’s presentation of the analysis.

He made special mention of the sustained hematocrit elevation on dapagliflozin. “While this effect may likely relate to the mild reduction in plasma volume secondary to dapagliflozin therapy, it is noted that the increase in hematocrit was independent of any change of the diuretic dose,” Doehner said.

“If additional mechanisms have a role for this observed increase in hematocrit, it may be of interest in further investigations.”

Jackson pointed to several observations that suggest the hematocrit finding isn’t explained by hemoconcentration from reduced plasma volume, at least not entirely.

For example, hematocrit levels rose “without any suggestion of a relationship between diuretic dose and degree of hematocrit elevation with dapagliflozin,” she told theheart.org | Medscape Cardiology.

The elevations persisted even with diuretic dose reductions at 6 and 12 months, “which should have led to a decrease in hemoconcentration if it was caused by volume contraction.”

Also, she said, “among patients not taking a diuretic, volume depletion occurred less frequently in the dapagliflozin group than in the placebo group, but there was still a similar rise in hematocrit with dapagliflozin.”

Both Jackson and Coats said the sustained elevation in hematocrit on the drug is unlikely to pose a major hazard.

Theoretically, Coats said, “increased hematocrit could reduce peripheral vessel blood flow, making ischemia and thrombosis more likely. But the size of the effect is small and unlikely to be clinically important.”

A diuretic dose could not be determined for 128 of the trial’s 4744 randomized patients with HFrEF, so the post hoc analysis was limited to the remaining 4616. Of those, 746 were not on diuretics at baseline; 1311 were on loop diuretics at less than 40 mg FE or on nonloop-diuretics only; 1365 were taking 40 mg FE; and 1204 were on higher doses of loop diuretics.

The mean baseline dosage was 60 mg FE, which rose slightly throughout the trial. But the baseline dosage and the increases were both similar in the placebo and dapagliflozin groups. Jackson said 84% and 83% of patients on dapagliflozin and placebo, respectively, maintained their baseline dose at both 6 months, and about 77% in both groups at 12 months.

The overall trial’s significant primary end-point reduction for dapagliflozin vs placebo applied similarly to patients not on a diuretics and those on any dose of diuretic, with an interaction P value of .23 for the effect of diuretic use. The hazard ratios (HR) were:

Patients on diuretics, Jackson said during her formal online presentation, showed a “tendency toward slightly more volume depletion in those on dapagliflozin than in those on placebo, but the excess was small and not greater than approximately 3% in those taking 40 mg furosemide equivalent diuretic. And fortunately, this did not result in an increase in frequency in renal adverse events nor of discontinuation of study drug.”

Renal adverse events were similarly prevalent in the two treatment groups, as were such events leading to treatment discontinuation. But serious renal events were less common in the dapagliflozin group (1.6% vs 2.7%; P = .009), as was investigator-reported serious acute kidney injury (1.0% vs 1.9%; P = .007).

“Overall, renal events were infrequent,” Jackson said, and “because of the small number of events, it is very difficult to draw conclusions about the impact of dapagliflozin on renal function according to diuretic-dose subgroups.”

Still, she said, worsening renal function was less common on dapagliflozin in three of the four groups by diuretic dosage; the exception was the less than 40 mg FE group, “but the absolute difference in this group was only two events.”

There seem to be dapagliflozin mechanisms “underneath the surface that need to be unraveled,” Doehner said as discussant, processes that are favorable for the treatment of HFrEF in which “diuretics play no big role.”

HFA Discoveries 2020 from the Heart Failure Association (HFA) of the European Society of Cardiology. Presented June 5, 2020.