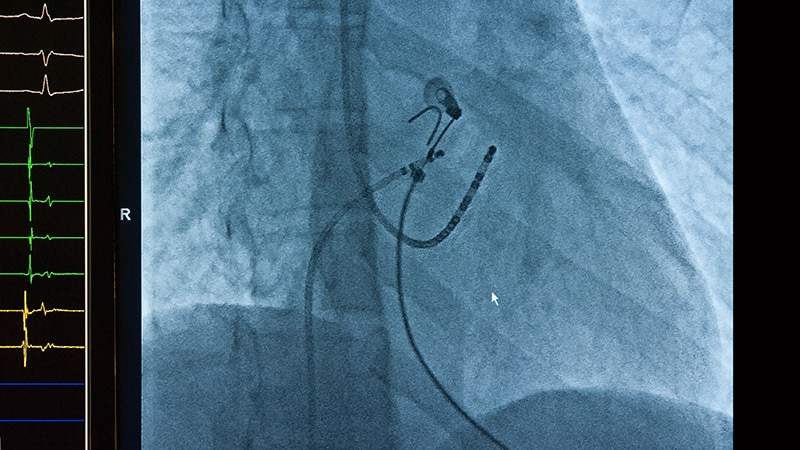 The addition of image-guided atrial fibrosis ablation did not significantly reduce the risk of recurrence relative to pulmonary vein isolation (PVI) alone in patients with treatment-resistant atrial fibrillation (AFib), according to results of an intention-to-treat analysis of the randomized DECAAF II trial.

However, there was a significant advantage for the addition of image-guided ablation in the subgroup of patients with stage I or II fibrosis, and this is a clinically meaningful finding, Nassir F. Marrouche, MD, reported at the annual congress of the European Society of Cardiology.

“Patients at early stages [of fibrosis] appear to do well if you do a good job covering the myopathy [with scar formation], and that is an important message,” said Dr. Marrouche, the principal investigator.

The underlying hypothesis of the DECAAF trial was that ablation guided with MRI imaging would prove superior to PVI alone in the treatment of resistant AF. There were 843 participants randomized at 44 centers. At baseline, all underwent a late gadolinium-enhancement MRI, a technique that allows detection of fibrotic tissue.

After a median follow-up of 12 months, recurrence of AFib, which was the primary endpoint, was observed in 43% in the intervention group and 46.1% in the control group. The relative 5% reduction for treatment was not statistically significant (hazard ratio, 0.95; 95% confidence interval, 0.778-1.17; P = .63).

As part of the study protocol, MRI was repeated 3 months after treatment in all patients. This permitted the investigators to evaluate the degree of scar formation in relation to the fibrosis covered in the intervention group. Independent reviewers rated this coverage on levels from 1 to 5, with 5 representing complete coverage.

In this analysis, it was found that ablation resulted in higher levels of lesion formation in those with early stages of disease, defined as stage I or II fibrosis, but lower levels in advanced stages.

“The more myopathy, the more disease, the less likelihood of lesion formation,” reported Dr. Marrouche, professor of medicine in the section of cardiology at Tulane University, New Orleans.

Attributed to the greater levels of fibrosis coverage, the risk of AF recurrence over the course of follow-up was significantly reduced in the intervention relative to the control group on as-treated analysis in patients who had stage I or II fibrosis at baseline (HR 0.841, 95% CI, 0.732-0.968; P < .05).

“This has huge implications going forward,” Dr. Marrouche maintained. In the context of a series of previous trials, including DECAAF I, which associated advanced fibrosis with higher risk of failing ablation, DECAAF II provides the groundwork for “where and how to ablate.”

Taken together, the DECAAF data suggest that there is no value in ablating advanced fibrosis. Due to the poor scar formation needed to reduce risk of AF recurrence, there are no benefits to outweigh the slightly greater risk of strokes and other adverse events observed among the intervention group in the DECAAF II trial, according to Dr. Marrouche.

“If the fibrosis is advanced, do PVI only,” he said.

However, if fibrosis remains at an early stage, defined by these data as stage II or lower, the data from DECAAF indicated that there is a benefit, according to Dr. Marrouche.

“DECAAF tells you to target early disease,” he said. Asked if he would now apply these data to treatment of patients with early fibrosis, he replied, “Yes, that’s what I am concluding.”

Several aspects of the design of DECAAF II, such as the use of a follow-up MRI to assess ablation at 3 months, were praised by Paul J. Wang, MD, director, Stanford Cardiac Arrhythmia Service, Stanford (Calif.) University, but he did not agree with Dr. Marrouche’s interpretation. This included the contention that scar formation was easier to achieve in patients with less atrial fibrosis.

DECAAF II Is Not a Positive Trial

In addition, “the authors suggest that the failure to achieve a good ablation lesion may account for the AFib recurrence,” said Dr. Wang, editor-in-chief of the American Heart Association’s Circulation: Arrhythmia and Electrophysiology. However, due to the many other potential variables influencing this risk, “this is difficult to show.”

Ultimately, despite a benefit observed among patients with a low level of fibrosis that was identified in an as-treated subgroup, “DECAAF II joins the numerous studies [evaluating the addition of an intervention relative to PVI alone] that have not achieved the primary endpoint,” Dr. Wang concluded.

An ESC-invited discussant, Christophe Leclercq, MD, chief of cardiology at Centre Hospitalier Universitaire, Rennes, France, made the same point. He said several previous studies have made the concept of achieving greater ablation to reduce AF recurrence “attractive,” but this “was not confirmed in DECAAF II.”

He also would not endorse MRI-guided ablation in resistant AFib among patients with early disease.

“There was a positive result observed in those with a low stage of fibrosis, but there were also more complications in those undergoing MRI-guided ablation,” he said.

This article originally appeared on MDedge.com, part of the Medscape Professional Network.

Anticoagulants Can Ease Cognitive Decline in AF Patients
Europe and Central Asia could suffer another 700,000 Covid deaths by spring as infections soar, WHO says
Some AMA Delegates Decry Dismissal of Global Warming as a Health Crisis
Deaf Football Team Makes History, Heads To School’s First Finals Game In 70 Years
Triplet Regimen Boosts Survival in Metastatic Melanoma, but at a Cost