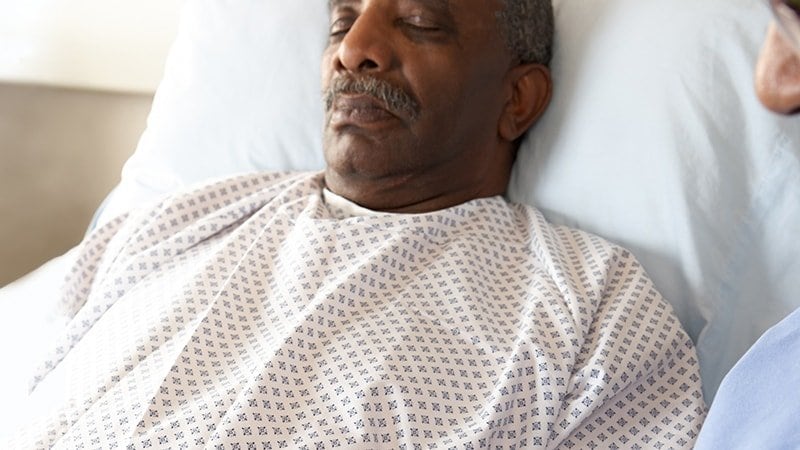 The opioid epidemic has led to a decline in the use of opioids for end-of-life pain care in patients with cancer that is disproportionately felt by black patients, reveals a large-scale analysis of Medicaid data.

The research, presented at the virtual 2020 annual meeting of the American Society of Clinical Oncology, shows that black patients also end up making more pain-related visits to the emergency department than their white counterparts.

“This is an important, serious, and disturbing finding,” said Stewart B. Fleishman, MD, Coachella Valley Volunteers in Medicine, Indio, California, commented in a meeting highlights session.

Fleishman challenged his peers to “reduce implicit bias on an ongoing basis” to address black Americans being sub-optimally treated for cancer pain.

Study author Andrea Enzinger, MD, Dana-Farber Cancer Institute, Boston, Massachusetts, provided broad context for this new research. She explained that the opioid epidemic, “which claims the lives of approximately 130 people each day,” is widely seen as the result of a fourfold increase in opioid prescribing from 1999 to 2010.

In response, policymakers restricted inappropriate prescribing, such as via state prescription drug monitoring programs and restrictions on the quantity, dose, and duration of opioid prescriptions, which saw a 35% reduction in prescriptions from the 2010 peak. This gave rise to difficulties in accessing the pain-killing drugs, she said.

Because racial and ethnic minorities are “particularly vulnerable to undertreatment,” Enzinger and colleagues looked at Medicaid data on more than 243,000 cancer patients with a poor prognosis and who died or went into hospice care within 30 days.

“And these disparities persisted across our study period,” said Enzinger.

“Despite the attempt at mitigation, clear declines were seen in a percentage of advanced cancer patients receiving opioids overall and, in particular, the long- acting opioids frequently required to maintain quality of life in this setting.”

She continued: “We still need to understand more about where in the healthcare system the bottlenecks are occurring and getting appropriate pain management to end-of-life cancer patients.”

“Here is a study that reveals something that none of us really like to think about too much,” said Coachella Valley Volunteers in Medicine’s Fleishman.

Addressing the racial disparities, he said: “We could postulate that there is still significant implicit bias on the part of providers.”

But Fleishman also spotlighted the possible role of local pharmacies in the new data. “There are also other issues that fall into play, including low inventory of oral opioids, be it short- or long-acting, at neighborhood pharmacies.”

He added: “Patients or families may believe that they may not be able to advocate for themselves or families, or they may be relying on their spiritual beliefs to minimize pain, and that needs to be teased out in future studies.”

Fleishman noted that local pharmacies “are often not giving out end-of-life doses,” so clinicians should call them to explain what the treatment program entails and make “sure they have adequate inventories and stock, and a safe place to put them.”

To examine the impact of the opioid epidemic on access to opioids and pain management among patients dying of cancer and racial/ethnic disparities, the team conducted a retrospective analysis of Medicare claims data.

They focused on a 20% random sample of Medicare fee-for-service beneficiaries who were age 66 years or older, had “poor prognosis cancer,” and died between 2007 and 2016.

The researchers gathered data on opioid prescription fills and emergency department visits in the 30 days before death or hospice enrollment. Opioids were classified as:

The majority (205,872) of the patients were white, 22,566 were black, and 14,688 were of other ethnicity. The prevalence of colorectal and prostate cancer was higher among black patients than other groups, and they were marginally more likely to be aged 66 to 74 years.

The results showed that, across the board, the proportion of patients with at least one opioid prescription fill in the last 30 days declined from 42% in 2007 to 35.8% in 2016.

A similar pattern was seen when the team looked at trends in long-acting opioid use near the end of life.

They found that, overall, the proportion of patients with at least one prescription fill decreased from 18.1% in 2007 to 12.4% in 2016, figures that tracked with those seen in white patients.

The daily dose of opioids also decreased, from a morphine milligram equivalent dose of 86 in 2007 to 69 in 2016 in the overall cohort, and from 78 to 61 among black patients.

On analyses adjusted for age, comorbidities, cancer type, region, and median household income, Enzinger reported that black patients had lower rates of opioid prescriptions than whites, at an adjusted odds ratio of 0.84.

They also had lower access to long-acting opioids, at an adjusted odds ratio of 0.79, and a lower daily dose, at a correlation coefficient of -13.42.

Finally, when the team looked at pain-related emergency department visits in the last 30 days, they found that there was an overall increase in the proportion of patients with at least one visit, from 13.2% in 2007 to 18.8% in 2016.

This was again reflected in adjusted analyses, with blacks having an odds ratio of pain-related emergency department visits of 1.37 vs whites, compared with an odds ratio of 1.05 when looking by year.

The study was funded by the US National Institutes of Health.

Enzinger reports consulting or advisory roles with Astellas Pharma (I), AstraZeneca (I), Daiichi Sankyo (I), Five Prime Therapeutics (I), Lilly (I), loxo (I), Merck (I), Taiho Pharmaceutical (I), and Zymeworks (I). Study coauthor David M. Cutler reports stock and other ownership interests with Firefly Health and Kyruus. Reeder-Hayes and Fleishman have disclosed no relevant financial relationships.