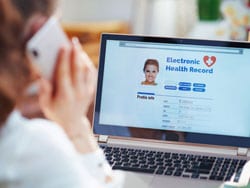 Reminder messages sent through electronic health records (EHRs) to patient portals increased rates of scheduling and completion of well-child visits for those overdue for well care, as well as vaccination rates, according to data published today in JAMA Network Open.

The practices serve a mostly non-Hispanic Black, low-income population and provide more than 60,000 visits a year to 30,000 patients.

The study population was randomized to get either a standard reminder message, a tailored message, or no message (control group).

The standard messages referenced the patient’s first name and reminded parents their child was due for a well-child visit, and asked them to schedule it using the portal or by calling the number provided.

The tailored message added the date of the last well-child check-up “to address distortions of time perception experienced during the pandemic,” the authors write.

There was a significant increase in scheduling and completion of appointments after parents received the standard and tailored messages compared with controls.

The results with the COVID reminders were particularly striking. While only 3.7% of the eligible patients got a vaccine when they got no message, 17.3% got the vaccine in that time frame when they got the standard message. Interestingly, only 2.7% received the shot after the tailored message.

J. Howard Smart, MD, with Sharp HealthCare in San Diego, told this publication he was not surprised that a patient portal reminder would increase the rate of scheduling overdue well-child visits. “Parents may indeed have lost track of when their children need to have check-ups” during the pandemic, he said.

He said he was surprised, just as the investigators were, that the reminders without the tailored information seemed to be more effective for some outcomes.

The authors explained that a focus group found “that families with patient portal accounts prefer straightforward, brief, and user-friendly messages.”

That may help explain why the standard message outperformed the tailored message, the authors write.

“Families may have been distracted by the additional information related to the child’s age and date of last WCC [well-child check-up] in the tailored message,” they write.

Smart said, “Their discussion of why this might be the case sounds reasonable. Simple, short messages may be better received.”

“Evidence like this should stimulate portal software vendors to make this kind of outgoing messaging easy to set up for providers,” he said.

Tim Joos, MD, a pediatrician in Seattle, told this publication he “was impressed by how such a simple measure increased rates of well-child care completion.”

Minority and low-income patients have traditionally had more access challenges to completing health care visits and vaccinations on schedule, he noted, so he was glad to see positive results from the intervention in this study population.

The authors note that research on portal messages have largely looked at use in non-Hispanic Whites and the privately insured.

Joos said the intervention also offers convenience in that once patients get into the portal, they can schedule an appointment there without having to wait on the phone or leave a message.

Funding/support was received from the Center for Clinical and Translational Science and Training at the University of Cincinnati, which is funded by the National Institutes of Health. William B. Brinkman, MD, MEd, MSc, one of the study authors, holds common stock in Pfizer, Merck, Abbott Laboratories, Viatris, and Johnson & Johnson outside the submitted work. No other author disclosures were reported. Smart and Joos declared no relevant financial relationships.

This story originally appeared on MDedge.com, part of the Medscape Professional Network.