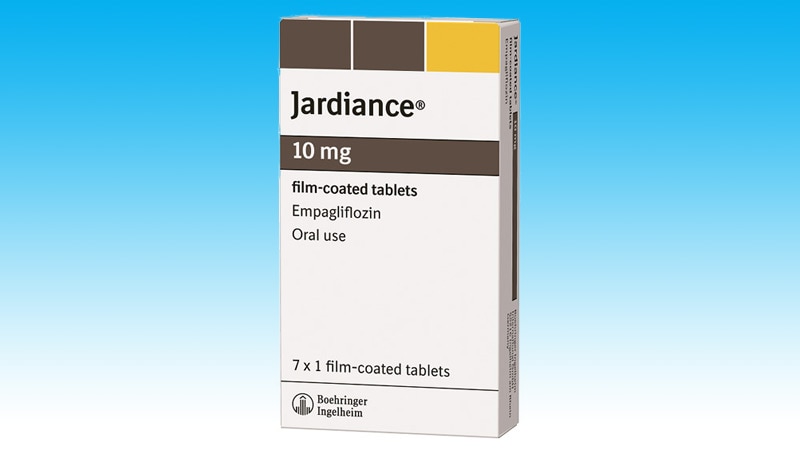 Patients with type 2 diabetes treated with the SGLT2 inhibitor empagliflozin during the landmark EMPA-REG OUTCOME trial had a solidly reduced need to either start insulin treatment or intensify existing insulin treatment, compared with those given placebo, in a post-hoc analysis of the study’s findings.

The patients in the empagliflozin (Jardiance) arm of EMPA-REG OUTCOME had a 9% rate of initiating insulin treatment after 4 years in the study, compared with a 20% rate among patients who received placebo, a statistically significant 60% relative risk reduction. All patients in the trial continued on their background oral glucose-lowering medications.

Among the 48% of study patients who entered the study already using insulin as part of their usual regimen, 18% of those receiving empagliflozin required a significant increase in their insulin dosage (an increase of at least 20% from baseline) after 4 years. But among the control patients, 35% needed this level of insulin-dosage intensification, again a statistically significant difference that computed to a 58% relative reduction in the need for boosting the insulin dosage.

For both of these endpoints, the divergence between the empagliflozin and control arms became apparent within the first 6 months on treatment, and the between-group differences steadily increased during further follow-up. The analyses pooled the patients who received empagliflozin in the trial, which studied two different dosages of the drug.

Results Add to the ‘Risk and Benefit Conversation’

“This is one of the first studies to look at this question in a more granular fashion” in patients with type 2 diabetes receiving a drug from the sodium-glucose cotransporter 2 (SGLT2) inhibitor class, said Dr. Vaduganathan, a cardiologist at Brigham and Women’s Hospital in Boston. It provides “compelling” information to include when discussing oral diabetes-drug options with patients, he said in an interview.

Patients newly diagnosed with type 2 diabetes “often think about insulin” and their potential need to eventually start taking it, with the requirements it brings for training, monitoring, and drug delivery, along with the costs for insulin and glucose monitoring. “Patients are very attuned to potentially needing insulin and often ask about it. A reduced need for insulin will be an important part of the risk and benefit conversation” with patients about potential use of an SGLT2 inhibitor, he said.

Dr. Vaduganathan hypothesized that three factors could contribute to the impact of empagliflozin on insulin initiation and dosage level: a direct glycemic-control effect of the drug, the drug’s positive impact on overall well-being and function that could enhance patient movement, and the documented ability of treatment with empagliflozin and other drugs in its class to cut the rate of heart failure hospitalizations. This last feature is potentially relevant because insulin treatment often starts in patients with type 2 diabetes during a hospitalization, he noted.

The association of empagliflozin treatment with a reduced need for insulin seen in these data is consistent with expectations for patients with type 2 diabetes who receive an additional oral drug, commented Yehuda Handelsman, MD, an endocrinologist and diabetes specialist who is medical director of The Metabolic Institute of American in Tarzana, Calif. “In large part it has to do with patients on placebo having to get more insulin” because their additional oral-drug options were limited. Dr. Handelsman pointed out that during the period when the EMPA-REG OUTCOME trial ran, from 2010-2015, fewer oral drugs were available than today, and clinicians in the study were encouraged to treat patients to their goal glycemia level according to local guidelines. In addition to a modest but useful glycemic control effect from SGLT2 inhibitors that, on average, cut hemoglobin A1c levels by about 0.5%, they may also give a small boost to insulin sensitivity that can also defer the need to add or increase insulin. The level of insulin-treatment deference reported in the new analysis was “not a spectacular effect” he said in an interview.

The EMPA-REG OUTCOME (Empagliflozin Cardiovascular Outcome Event Trial in Type 2 Diabetes Mellitus Patients) study followed 7,020 patients at 590 sites in 42 countries for a median of 3.1 years. The study’s primary endpoint was a composite of death from cardiovascular causes, nonfatal myocardial infarction (excluding silent MI), or nonfatal stroke, and the results showed a statistically significant 14% relative risk reduction with empagliflozin treatment (N Engl J Med. 2015 Nov 26;373[22]:2117-28 ). The results also showed that 12 weeks into the study, before patients could receive any additional drugs, HbA1c levels averaged 0.54%-0.6% lower among the empagliflozin-treated patients than those in the placebo arm, with smaller between-group differences maintained through the balance of the study. At entry, more than half the enrolled patients were routinely treated with metformin, and close to half were receiving a sulfonylurea agent.

The EMPA-REG OUTCOME results were also notable as showing for the first time that treatment with an SGLT2 inhibitor drug produced a substantial decrease in heart failure hospitalizations, incident heart failure, and progression of renal dysfunction, effects subsequently confirmed and also found for other agents in this drug class.

How to Achieve Superhuman Productivity #SHORTS
Minerva Neurosciences Announces Update on its New Drug Application (NDA) for Roluperidone for the Treatment of Negative Symptoms in Schizophrenia
The end of the Covid health emergency won’t slow FDA clearance of shots and treatments
A common nail salon tool may cause mutations in human cells
Mayo Clinic Minute: What are NSAIDs?