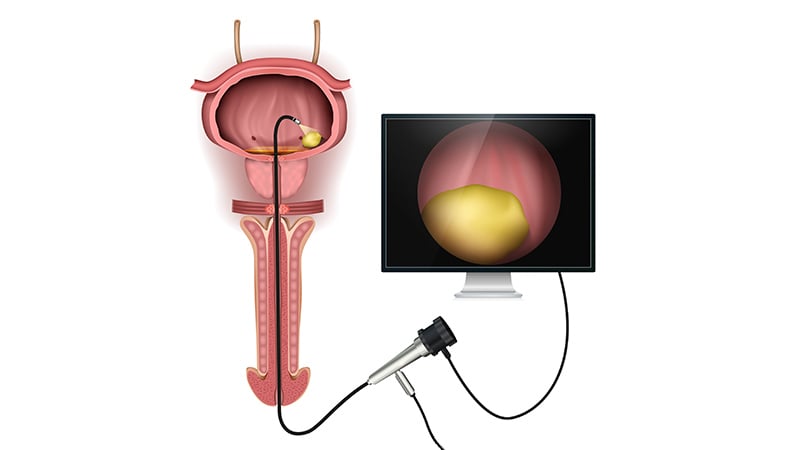 Usually, such patients follow an highly intensive schedule of surveillance, undergoing regular cystoscopies, which involves insertion of a narrow tube with a lens into the urethra to enable a physician to inspect the bladder.

A comparison between the two schedules did not find increased risk of disease progression or bladder cancer death with the less intensive schedule, plus there was a benefit of fewer additional surgeries compared to the high-intensity group.

These results come from a retrospective review of more than 1500 patients.

For that reason, they do not change current practice; for that to happen, results from a prospective, randomized controlled trial are needed, said study investigators.

“For the immediate future, sticking to what is in the guidelines is the appropriate approach,” said senior author Florian Schroeck, MD, White River Junction Veterans Administration (VA) Medical Center, Vermont.

He spoke at a webcast last week in advance of the upcoming virtual annual meeting of the American Urological Association, where the study will be presented. It was also published March 23 in PLOS ONE.

The current high-intensity approach creates a busy schedule for patients: cystoscopy every 3 to 4 months for 2 years, every 6 months for an additional 2 years, and then annually (per the American Urological Association guidelines).

We know for many patients that’s way too much.
Dr Sam Chang

“We know for many patients that’s way too much,” said presscast moderator Sam Chang, MD, of Vanderbilt University, Nashville, Tennessee.

The surveillance schedule is based on expert opinion, he added, explaining that urologists have historically followed this timetable.

“Every patient would applaud and appreciate at least the possibility of decreasing the rigor of the screening,” Chang claimed.

Chang told Medscape Medical News that the current study is part of a larger movement to de-intensify management of urologic cancers in the United States. Investigators are looking at decreasing the monitoring of prostate cancer managed with active surveillance (less frequent PSA testing and biopsies) as well as reducing follow-up for testicular cancer (less imaging), and for low-risk kidney cancer (fewer CT scans).

In the new study, 1542 Veterans Affairs patients diagnosed with high-risk NMIBC between 2005 and 2011 (with follow-up through 2014) were categorized by the number of surveillance cystoscopies they had during the 2 years after diagnosis. Patients who underwent between one and five cystoscopies were placed in the low-intensity surveillance group, while patients who underwent six or more were considered high-intensity surveillance.

Investigators assessed the association of low-intensity cystoscopic surveillance with frequency of transurethral resections, and risk of progression to invasive disease and bladder cancer death.

Additionally, the risk of death from bladder cancer did not differ significantly by low-intensity (cumulative incidence [CIn] 8.4% at 5 years) vs high-intensity surveillance (CIn 9.1% at 5 years, P = .61).

The investigators also broke down the results by patients’ tumor subtypes: Ta (a small section of tissue that easily can be removed) and T1 (less easily removed because it has spread to the connective tissue beneath the lining of the renal pelvis or ureter).

“These findings suggest that less intensive surveillance might be reasonable for patients with high-risk NMIBC,” the authors conclude.

However, the findings are subject to unmeasured confounding because they are retrospective, they say. “Thus, we do not advocate for lower intensity surveillance of high-risk NMIBC based on our findings,” the VA team states.