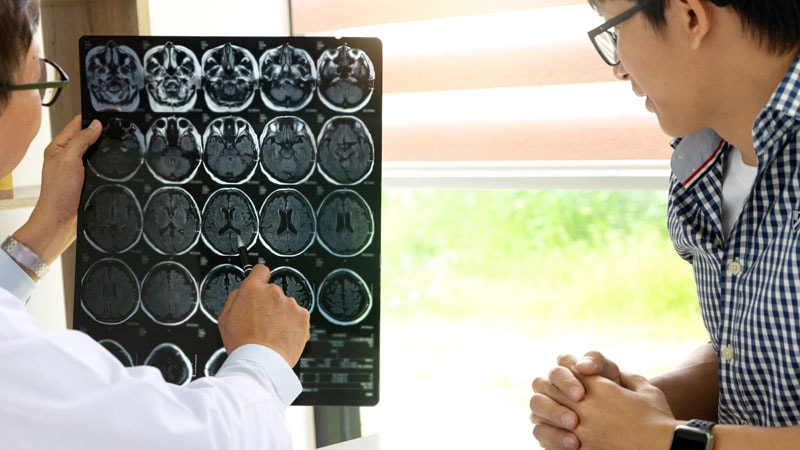 Some patients with heart failure with reduced ejection fraction (HFrEF) don’t respond well enough even to “quartet therapy,” the combination of drugs from four separate classes recommended as first-line agents to be initiated early after the diagnosis. A member of yet another drug class, tentatively envisioned as second- or third-line option in such cases, may offer a novel side benefit beyond the primary effect on mortality or HFrEF events seen in a large phase-3 trial.

The investigational agent, omecamtiv mecarbil (Cytokinetics), may also cut the risk of fatal or nonfatal stroke in such patients, suggests a new secondary analysis of the GALACTIC-HF trial, which randomly assigned both inpatients and outpatients with the chronic disease.

The stroke benefit may have been the result, in part, of another finding, reduced risk for new-onset atrial fibrillation or flutter (AF/AFl) in the patients assigned to the drug, described as a myosin activator.

“If there’s one thing I think is the most exciting part about this, that’s it,” Teerlink told theheart.org | Medscape Cardiology. Such patients who develop AF would likely go on oral anticoagulation, “but if there’s a way to improve their risk of stroke without having to use an anticoagulant, that’s actually, to me, really quite compelling.”

The findings certainly aren’t conclusive; although strokes were prospectively defined and adjudicated in GALAXY-HF, they weren’t part of the primary endpoint, Teerlink cautioned.

“Omecamtiv mecarbil should not be part of the four pillars. It did not save lives,” he said, in reference to the quartet therapy consisting of an angiotensin receptor–neprilysin inhibitor (ARNI), a beta blocker, a mineralocorticoid receptor antagonist (MRA), and an SGLT2 inhibitor.

But evidence is sufficient to say that omecamtiv mecarbil, if it is approved, “should be added in patients with left ventricular ejection fractions less than 35% who are on, or are in the process of being put on, the four pillars,” he said. “I think it’s appropriate for it to be the first of the second tier.”

As previously reported, patients in GALACTIC-HF assigned to the drug showed a modest but significant 8% decline in risk for the trial’s primary endpoint, heart failure-related events or CV death over a median 22 months.

In the current analysis, those taking omecamtiv mecarbil also benefited with a 35% drop in risk for a first fatal or nonfatal stroke, compared with the control group; the risk of fatal strokes fell by 44%.

“I think the jury is still out, and more research needed to solidify the stroke-reduction issue,” he said when interviewed. “But it seems to be a very strong signal at the very least.”

Stroke is a very relevant endpoint in heart failure, “and not something that gets a lot of focus in heart failure trials,” said Greene, who is not a co-author on the GALACTIC-HF publication. So, for omecamtiv mecarbil, it’s at least “a feather in the cap to be able to say you can potentially decrease the risk of stroke.”

It’s a major limitation that the current analysis is post-hoc, Martha Gulati, MD, University of Arizona, Phoenix emphasized to theheart.org | Medscape Cardiology. But “If the findings of GALACTIC HF are confirmed in large, prospective randomized controlled trials, this drug would add significantly to the guideline-directed medical therapy recommended for patients with HFrEF.”

The observed stroke benefit associated with fewer cases of new-onset AF/AFl in GALAXY-HF may also owe to ventricular reverse-remodeling on omecamtiv mecarbil evidenced in the study and in the earlier ATOMIC-AHF and COSMIC-HF trials. There were also suggestions that the drug improves ejection fraction, natriuretic peptide levels, and sympathetic drive.

The “decrease in atrial fib rate is probably the main mechanism, but heart failure is a prothrombotic state even in the absence of [atrial fibrillation],” Gulati noted. So the stroke-risk reduction may also derive independently from the observed structural and physiologic changes.

Omecamtiv mecarbil strengthens ventricular contractile force by stabilizing myosin in the pre-power stroke state, which boosts the amount of primed myosin that can bind to actin filaments, a mechanism that sets it apart from conventional positive inotropic agents.

It isn’t approved anywhere but is likely undergoing or soon to undergo review by US regulators after more than a decade of promising phase 2 and 3 clinical trials.

GALAXY-HF entered 8256 patients on standard drug therapy for chronic HFrEF and left ventricular ejection fractions (LVEF) no higher than 35% who were either hospitalized or hospitalized within the past year or required an emergency department visit for heart failure. About 53% were in NYHA class 2, 44% in class 3, and the remainder in class 4.

The benefit seen across the whole trial was “substantially better in patients who have some other risk factor,” Teerlink observed. The trial suggests that you get “better bang for your buck,” for example, in patients with ejection fractions less than 30%, in at least NYHA class 3, or with natriuretic peptides considerably elevated beyond entry criteria requirements, he noted.

“We need to have as many therapeutic options as possible, because sometimes patients don’t tolerate other therapies,” observed Greene. In GALACTIC-HF, he noted, there was little effect from omecamtiv mecarbil on blood pressure or an adverse effect on renal function, and the benefits seemed more pronounced in sicker patients.

“So potentially the patients who need the most help — that’s where this drug seemed to be safe, well tolerated, and helpful.”

Importantly for context, he said, new-onset AF/AFl was documented as a serious adverse event “so it included only events requiring hospitalization or intervention.”

With the field’s current focus on the four pillars of HFrEF medical therapy and how to ensure them for patients, “we have to keep focusing on the residual risk that heart failure patients face even despite being very well treated,” Greene said.

“Drugs like omecamtiv mecarbil I think are going to be helpful for patients to reduce that residual risk,” he added, “and for patients who can’t tolerate some of our other heart failure therapies, given that this drug in particular is especially well tolerated.”