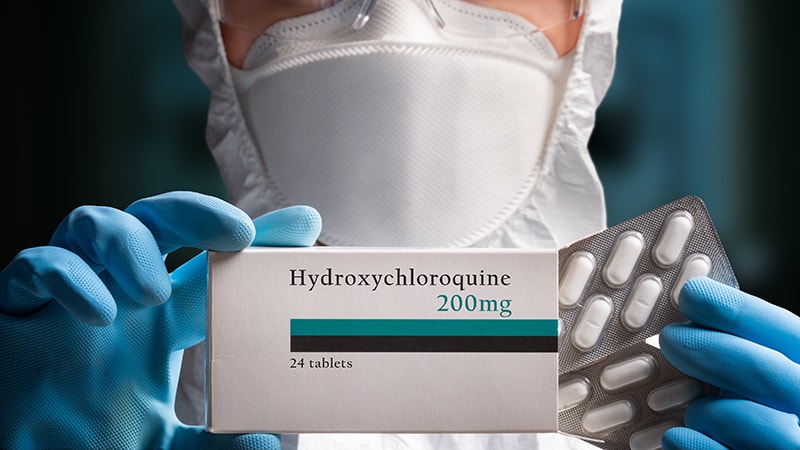 Hydroxychloroquine and chloroquine, with or without azithromycin or clarithromycin, offer no benefit in treating patients with COVID-10 and, instead, are associated with ventricular arrhythmias and higher rates of mortality, according to a major new international study.

Treatment with any of these medications, either alone or in combination, was associated with increased death during hospitalization: compared with about 10% in control group patients, mortality rates ranged from more than 16% to almost 24% in the treated groups.

Patients treated with hydroxychloroquine plus a macrolide showed the highest rates of serious cardiac arrhythmias, and, even after accounting for demographic factors and comorbidities, this combination was found to be associated with a more than 5-fold increase in the risk of developing a serious arrhythmia while in the hospital.

“In this real-world study, the biggest yet, we looked at 100,000 patients [with COVID-19] across 6 continents and found not the slightest hint of benefits and only risks, and the data is pretty straightforward,” study coauthor Frank Ruschitzka, MD, director of the Heart Center at University Hospital, Zurich, Switzerland, told theheart.org | Medscape Cardiology.

The study was published online May 22 in The Lancet.

The absence of an effective treatment for COVID-19 has led to the “repurposing” of the antimalarial drug chloroquine and its analogue hydroxychloroquine, which is used for treating autoimmune disease, but this approach is based on anecdotal evidence or open-label randomized trials that have been “largely inconclusive,” the authors write.

Additional agents used to treat COVID-19 are second-generation macrolides (azithromycin or clarithromycin), in combination with chloroquine or hydroxychloroquine, “despite limited evidence” and the risk for ventricular arrhythmias, the authors note.

“Our primary question was whether there was any associated benefits of the use of hydroxychloroquine, chloroquine, or a combined regimen with macrolides in treating COVID-19, and — if there was no benefit — would there be harm?” lead author Mandeep R. Mehra, MD, MSc, William Harvey Distinguished Chair in Advanced Cardiovascular Medicine, Brigham and Women’s Hospital, Boston, Massachusetts, told theheart.org | Medscape Cardiology.

They also collected data about demographics, underlying comorbidities and medical history, and medications that patients were taking at baseline.

The remaining patients not treated with these regimens (n = 81,144) were regarded as the control group.

Comorbidities and underlying conditions included obesity, hyperlipidemia, and hypertension in about 30%.

“In an observational study, there is always a chance of residual confounding, which is why we did propensity score based matched analyses,” Ruschitzka explained.

No significant differences were found in distribution of demographics and comorbidities between the groups.

As Good as It Gets

“We found no benefit in any of the 4 treatment regimens for hospitalized patients with COVID-19 but we did notice higher rates of death and serious ventricular arrhythmias in these patients, compared to the controls,” Mehra reported.

After accounting for confounding variables, the researchers estimated that the excess mortality risk attributable to use of the drug regimen ranged from 34% to 45%.

“We were fairly reassured that, although the study was observational, the signals were robust and consistent across all regions of the world in diverse populations, and we did not see any muting of that signal, depending on region,” Mehra commented.

“Two months ago, we were all scratching our heads about how to treat patients with COVID-19, and then came a drug [hydroxychloroquine] with some anecdotal evidence but now we have 2 months more experience, and we looked to science to provide some answer,” Ruschitzka said.

“Although this was not a randomized controlled trial, so we do not have a definite answer, the data provided in this [large, multinational] real-world study is as good as it gets and the best data we have,” he concluded.

“Let the Science Speak for Itself”

Commenting on the study for theheart.org | Medscape Cardiology, Christian Funck-Brentano, MD, from the Hospital Pitie-Salpetriere and Sorbonne University in Paris, France, said that although the study is observational and therefore not as reliable as a randomized controlled trial, it is “nevertheless well-documented, studied a huge amount of people, and utilized several sensitivity methods, all of which showed the same results.”

Funck-Brentano, who is the coauthor of an accompanying editorial and was not involved with the study, said that “we now have no evidence that hydroxychloroquine and chloroquine alone or in combination with a macrolide do any good and we have potential evidence that they do harm and kill people.”

Also commenting on the study for theheart.org | Medscape Cardiology, David Holtgrave, PhD, dean of the University at Albany School of Public Health said that, “while no one observational study alone would lead to a firm clinical recommendation, I think it is helpful for physicians and public health officials to be aware of the findings of the peer-reviewed observational studies to date and the NIH COVID-19 treatment guidelines and FDA statement of drug safety concern about hydroxychloroquine to inform their decision-making as we await the results of randomized clinical trials of these drugs for the treatment of COVID-19,” said Holtgrave, who was not involved with the study.

He added that, to his knowledge, there are “still no published studies of prophylactic use of these drugs to prevent COVID-19.”

Mehra emphasized that a cardinal principle of practicing medicine is “first do no harm” and “even in situations where you believe a desperate disease calls for desperate measures, responsible physicians should take a step back and ask if we are doing harm, and until we can say we aren’t, I don’t think it’s wise to push something like this in the absence of good efficacy data.”

Ruschitzka added that those who are encouraging use of these agents “should review their decision based on today’s data and let the science speak for itself.”

The study was supported by the William Harvey Distinguished Chair in Advanced Cardiovascular Medicine at Brigham and Women’s Hospital (Boston, MA, USA). Mehra reports personal fees from Abbott, Medtronic, Janssen, Mesoblast, Portola, Bayer, Baim Institute for Clinical Research, NuPulseCV, FineHeart, Leviticus, Roivant, and Triple Gene. Ruschitzka has been paid for time spent as a committee member for clinical trials, advisory boards, other forms of consulting, and lectures or presentations; these payments were made directly to the University of Zurich and no personal payments were received in relation to these trials or other activities. Funck-Brentano, his coauthor, and Holtgrave have declared no relevant financial relationships.