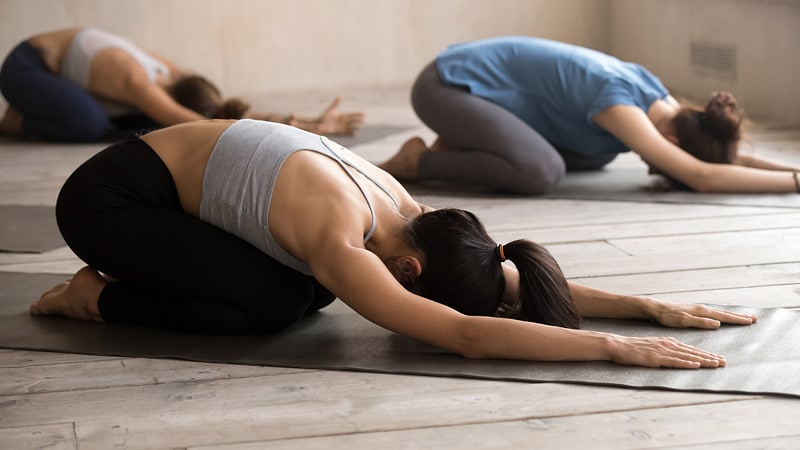 Results of the research, which included 19 studies and more than 1000 patients with a variety of mental health diagnoses, showed those who practiced yoga experienced greater reductions in depressive symptoms vs those undergoing no treatment, usual treatment, or attention-control exercises. In addition, there was a dose-dependent effect such that more weekly yoga sessions were associated with the greatest reduction in depressive symptoms.

“Once we reviewed all the existing science about the mental health benefits of movement-based yoga, we found that movement-based yoga — which is the same thing as postural yoga or asana — helped reduce symptoms of depression,” study investigator Jacinta Brinsley, BClinExPhys, University of South Australia, Adelaide, told Medscape Medical News.

“We also found those that practiced more frequently had bigger reductions. However, it didn’t matter how long the individual sessions were; what mattered was how many times per week people practiced,” she added.

The researchers note the study is the first to focus specifically on movement-based yoga.

“We excluded meditative forms of yoga, which have often been included in previous reviews, yielding mixed findings. The other thing we’ve done a bit differently is pool all the different diagnoses together and then look at depressive symptoms across them,” said Brinsley.

The study was published online May 18 in the British Journal of Sports Medicine.

Depressive disorders are currently the world’s leading cause of disability, affecting more than 340 million people.

Most individuals who suffer from depressive disorders also experience a host of physical comorbidities including obesity, type 2 diabetes, metabolic syndrome, and cardiovascular disease.

Perhaps not surprisingly, physical inactivity is also associated with higher levels of depressive symptoms, which may be the reason some international organizations now recommend that physical activity be included as part of routine psychiatric care.

One potential form of exercise is yoga, which has become popular in Western culture, including among psychiatric patients. Although previous systematic reviews and meta-analyses have examined the effects of various yoga interventions on mental health, none has investigated the benefits of yoga across a range of psychiatric diagnoses.

What’s more, the authors of these reviews all urge caution when interpreting their results because of potential heterogeneity of the various yoga interventions, as well as poor methodological reporting.

“As an exercise physiologist, I prescribe evidence-based treatment,” said Brinsley. “I was interested in seeing if there’s evidence to support movement-based yoga in people who were struggling with mental health or who had a diagnosed mental illness.

“The [previous] findings are quite contradictory and there’s not a clear outcome in terms of intervention results, so we pooled the data and ran the meta-analysis, thinking it would be a great way to add some important evidence to the science,” she added.

To allow for a more comprehensive assessment of yoga’s potential mental health benefits, the investigators included a range of mental health diagnoses.

Studies were only included in the analysis if they were randomized control trials with a yoga intervention that had a minimum of 50% physical activity during each session in adults with a recognized diagnosed mental disorder. Control conditions were defined as treatment as usual, waitlist, or attention controls.

Two investigators independently scanned article titles and abstracts, and a final list of articles for the study was decided by consensus. Study quality was reported using the PEDro checklist; a random effects meta-analysis was conducted using Comprehensive Meta-Analysis software.

A total of 3880 records were identified and screened. The investigators assessed full-text versions of 80 articles, 19 of which (1080 patients) were eligible for inclusion in the review.

Of the 1080 patients included in the review, 578 were assigned to yoga and 502 to control conditions. Yoga practice involved a mixture of movement, breathing exercises, and/or mindfulness, but the movement component took up more than half of each session.

Thirteen of the 19 studies (632 patients) reported changes in depressive symptoms and were therefore included in the meta-analysis. The six studies excluded from the quantitative analysis did not report depression symptom scores.

Is Movement the Key?

Researchers also performed a series of meta-regression analyses, which showed that the number of yoga sessions performed each week had a significant effect on depressive symptoms. Indeed, individuals with higher session frequencies demonstrated a greater improvement in symptoms (β –0.44; P < .001).

These findings, said Brinsley, suggest yoga may be a viable intervention for managing depressive symptoms in patients with a variety of mental disorders.

Based on these findings, Brinsley said she would encourage mental health practitioners to consider yoga as an evidence-based exercise modality for their patients, along with other conventional forms of exercise.

Equally important was the finding that the number of weekly yoga sessions moderated the effect of depressive symptoms, as it may inform the future design of yoga interventions in patients with mental disorders.

With this in mind, the researchers recommend that such interventions should aim to increase the frequency or weekly sessions rather than the duration of each individual session or the overall duration of the intervention.

However, said Brinsley, these findings suggest it is the physical aspect of the yoga practice that may be key.

“Yoga comprises several different components, including the movement postures, the breathing component, and the mindfulness or meditative component, but in this meta-analysis we looked specifically at yoga that was at least 50% movement based. So it might have also included mindfulness and breathing, but it had to have the movement,” she said.

Commenting on the findings for Medscape Medical News, Holger Cramer, MSc, PhD, DSc, who was not involved in the study, noted that the systematic review and meta-analysis builds on a number of previous reviews regarding the benefits of yoga for mental disorders.

“Surprisingly, the largest effect in this analysis was found in schizophrenia, even higher than in patients with depressive disorders,” said Cramer, of the University of Duisburg-Essen in Duisburg, Germany.

“This is in strong contradiction to what would otherwise be expected. As the authors point out, only about a quarter of all schizophrenia patients suffer from depression, so there should not be so much room for improvement.”

Cramer also advised against reducing yoga to simply a physical undertaking. “We have shown in our meta-analysis that those interventions focusing on meditation and/or breathing techniques are the most effective ones,” he added.

As such, he urged that breathing techniques be a part of yoga for treating depression in psychiatric disorders, though care should be taken in patients with PTSD, “since breath control might be perceived as unpleasant.”

For Brinsley, the findings help solidify yoga’s potential as a genuine treatment option for a variety of mental-health patients suffering depressive symptoms.

“It’s about acknowledging that yoga can be a helpful part of treatment and can have a significant effect on mental health,” she noted.

At the same time, practitioners also need to acknowledge that patients suffering from mental-health disorders may struggle with motivation when it comes to activities such as yoga.

“Engaging in a new activity can be particularly challenging if you’re struggling with mental health. Nevertheless, it’s important for people to have a choice and do something they enjoy. And yoga can be another tool in their toolbox for managing their mental health,” she said.

The study was funded by the UK National Institute for Health Research and Health Education England. Brinsley and Cramer have reported no relevant financial relationships.