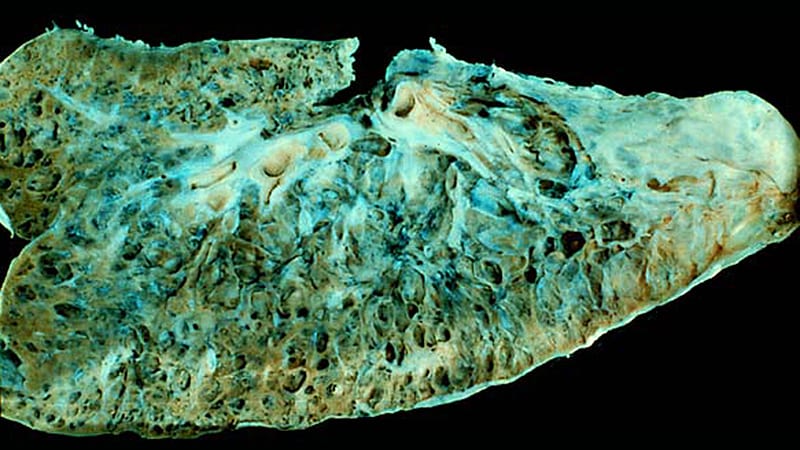 Patients with RA have an elevated risk of interstitial lung disease (ILD), but methotrexate does not accentuate that risk and may in fact be protective, new data show. These were among key findings of a pair of studies reported at the annual European Congress of Rheumatology, held online this year due to COVID-19.

Although a guideline-recommended cornerstone in the management of RA, methotrexate has been associated with both hypersensitivity pneumonitis and diffuse lung disease. However, its involvement in the development of ILD among patients with RA is unclear.

A Danish study of more than 30,000 RA patients reported at the congress found that their risk of ILD was about three to five times that of the general population. However, risk did not differ significantly whether they had filled a methotrexate prescription or not.

In addition, a multinational case-control study of more than 1,000 RA patients also reported at the congress found that, compared with never-users of methotrexate, ever-users actually had a 59% lower likelihood of developing ILD.

However, both studies were limited by their retrospective design, Elizabeth R. Volkmann, MD, codirector of the connective tissue disease–related interstitial lung disease program at the University of California, Los Angeles, cautioned in an interview. Hence, there was likely systematic bias and confounding.

“I would interpret the conclusions of both studies with caution,” she maintained. “To understand how a particular intervention, such as methotrexate use, affects the outcome of ILD development, a prospective design is needed, which adequately adjusts for known ILD risk factors, such as male sex and smoking.”

As to whether the new findings are practice changing and how they might affect patient counseling, “the answers to these questions are not straightforward and depend on other patient-related factors,” according to Dr. Volkmann.

René Cordtz, MD, a clinical assistant at the Center for Rheumatology and Spine Diseases, Rigshospitalet‐Gentofte, Copenhagen, and colleagues conducted a nationwide population-based cohort study using registry data from 1997 to 2015 to assess lung disease among patients with RA by prescriptions filled.

Results based on 30,512 RA patients showed that, compared with peers filling no methotrexate prescriptions, patients filling at least one did not have a significantly elevated risk of ILD at either 1 year of follow-up (hazard ratio, 1.03) or 5 years of follow-up (HR, 1.00). (Findings were similar for sulfasalazine, with respective nonsignificant HRs of 0.88 and 1.14.)

“RA patients have an increased risk of ILD, compared to the general population, which was not surprising, but very importantly, that risk was not further exacerbated in those treated with methotrexate,” Dr. Cordtz concluded. “We do acknowledge that purchasing your medicine is different from taking your medicine, which is why we found it extra reassuring that when requiring at least two methotrexate prescriptions to be considered exposed, it did not change our results.”

Pierre-Antoine Juge, MD, a rheumatologist at Bichat-Claude Bernard Hospital, Paris, and colleagues performed a case-control study among 482 RA patients with ILD and 741 RA patients without ILD in three cohorts: a French discovery cohort, a multinational (Brazilian, Italian, Mexican, United Kingdom, and United States) replication cohort, and a combined cohort. Those with methotrexate hypersensitivity pneumonitis were excluded.

Results showed that relative to peers without ILD, patients with ILD had a lower prevalence of ever having used methotrexate and had received a lower cumulative methotrexate dose, findings that were consistent across all three cohorts.

“Outside of methotrexate hypersensitivity pneumonitis, methotrexate was not a risk factor for RA-associated ILD in our study. We observed an inverse relationship that was similar whatever the high-resolution CT pattern,” Dr. Juge commented. “But this possible protective effect should be confirmed through a dedicated prospective, randomized, controlled trial.”

“Methotrexate should not be considered as a causal factor for RA-associated ILD, and its [discontinuation] should be discussed through a multidisciplinary discussion,” he recommended. In addition, “this study does not investigate the impact of methotrexate use on RA-associated ILD prognosis.”

The Danish study did not receive any specific funding, and none of its authors reported having any financial disclosures. The multinational study did not receive any specific funding. Dr. Juge disclosed that he had no relevant conflicts of interest, but many of his coauthors reported financial relationships with industry. Dr. Volkmann disclosed consulting for Boehringer Ingelheim and Forbius, and receiving grant support from Forbius and Corbus.