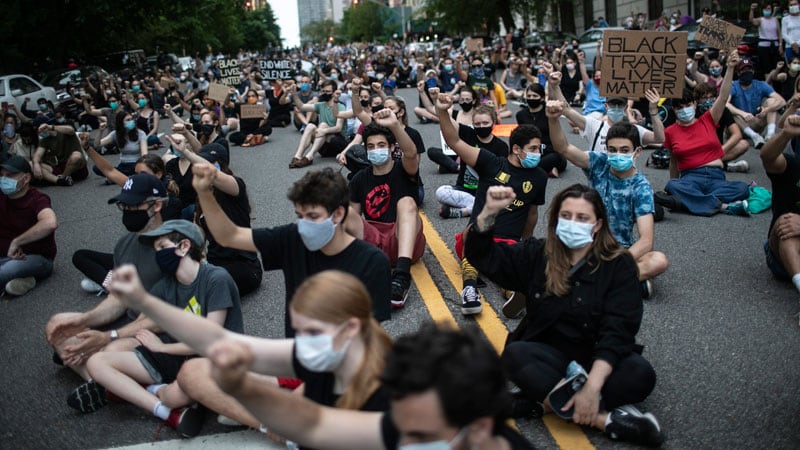 For weeks, Bruno Estrada diligently followed all the recommendations to stave off the coronavirus. He washed his hands frequently, worked from home, and left his house in Queens, NY, only to walk his dog and go grocery shopping. He avoided public transit to stay away from crowds.

But over the last week, Estrada has been among the hundreds of thousands of Americans who have defied orders designed to slow down the spread of the coronavirus and taken to the streets in protests sparked by anger, frustration, and sadness over the death of George Floyd. Floyd, an African American man, died last week in custody of Minneapolis police officers who have been charged in his death.

As they take in the images of mass gatherings for a second week, public health officials around the country worry they’re going to see more coronavirus cases and hospitalizations of patients with severe symptoms of COVID-19. There are reports of protesters who have tested positive for the virus, including a football player for Oklahoma State University who took part in a demonstration in Tulsa.

Bruno Estrada, left, at a recent demonstration in New York City
to protest the death of George Floyd.

“This is an especially difficult time for our country, and we certainly want to do everything we can to support everybody involved, because health and safety go hand in hand,” says Umair A. Shah, MD, the executive director of Harris County Public Health in Texas. “We just don’t want to go backward.”

Estrada, a 29-year-old environmental awareness educator, learned this week he had antibodies that likely show he has already been infected once. Still, he says taking to the streets to support friends who have been assaulted by officers was worth the risk of getting the virus a second time because “to me, it felt irresponsible not to stand up for the values of human life.”

Estrada says he’s going out of his way to keep himself and fellow protesters safe. He wears multiple masks, a long-sleeve shirt, goggles, and a hat when he goes out. When he gets home, he takes a shower, places his clothes in the laundry as soon as he can, and disinfects surfaces more often. He says he’s being more vigilant now in part to protect his parents, who had headaches, body aches, fevers, and other COVID-19 symptoms about 2 months ago.

Public health experts are hoping other protesters are as diligent and conscientious as Estrada. More than 100,000 people in the U.S. have died from the virus, and African Americans and Hispanics appear to be disproportionately affected by COVID-19.

Some are urging people to get tested after they protest and self-quarantine after.

As an extra measure to help curb the spread of the virus, Shah encourages protesters to get a coronavirus test about 5 days after they attend demonstrations — even if they don’t have symptoms — to protect their families, friends, and fellow marchers.

Some communities around the country are working to add testing sites, in part because of the protests. Georgia. Gov. Brian Kemp a said this week that certain counties would have more testing sites starting next week.

In Dallas County, TX, officials are trying to add testing centers that are easy to get to, says Philip Huang, MD, director of the county’s health department. There are two drive-thru locations, but testing is limited to people with chronic health conditions such as asthma or heart disease, people over 65, people with a cough, police officers, and others. The North Texas county has the second-highest number of reported cases in the state — more than 10,000.

Experts are giving demonstrators and first responders who are at the protests the same advice they’ve been driving home for at least 3 months: Wear masks to protect others, use hand sanitizer when needed, wash your hands as often as you can, and stay at least 6 feet away from each other. They also say protesters should stick to holding signs, stay away from the center to avoid being boxed in around a bunch of people, and not chant at the protests, because a recent study found that speaking can cause droplets of the virus to remain in the air for several minutes. Speaking loudly makes that worse.

People who are sick or are vulnerable to infection, the experts say, should stay away from those gatherings and find other ways to express their feelings and show support to the demonstrators, such as making donations or making signs.

As states have begun easing lockdown restrictions, some states — especially in the South and West — have seen flare-ups in cases. While some cases may be linked to the demonstrations, Theresa Cullen, MD, public health director of Arizona’s Pima County Health Department, was among experts who cautioned against pinning new cases on protesters. In the weeks leading up to the demonstrations, several states allowed restaurants, hair salons, and other businesses to reopen, and many families and friends gathered to celebrate recent holidays.

“There’s so much — from the scientific perspective — there so much that we don’t know about COVID-19,” Cullen says. “But we do know that close proximity puts people at risk.”

The risk of getting the virus — or transmitting it — is not far from Zhaira Costiniano’s mind.

Costiniano, 24, an assistant director at an art gallery in Dallas, says she got tested for the coronavirus this week after attending several protests. She says she’s been diligent about using masks and hand sanitizer at protests, and she’s keeping up a rigorous disinfection routine at home. If she tests positive for the virus, she’ll stay home.

“Unfortunately,” Costiniano says, “you can’t wait for a pandemic to be over to speak up the way a lot of us across the nation are speaking up right now. A lot of us are trying to be mindful that there is a pandemic going on.”

The New York Times: “Coronavirus in the U.S.: Latest Map and Case Count.”

Proceedings of the National Academy of Sciences of the United States of America: “The airborne lifetime of small speech droplets and their potential importance in SARS-CoV-2 transmission.”