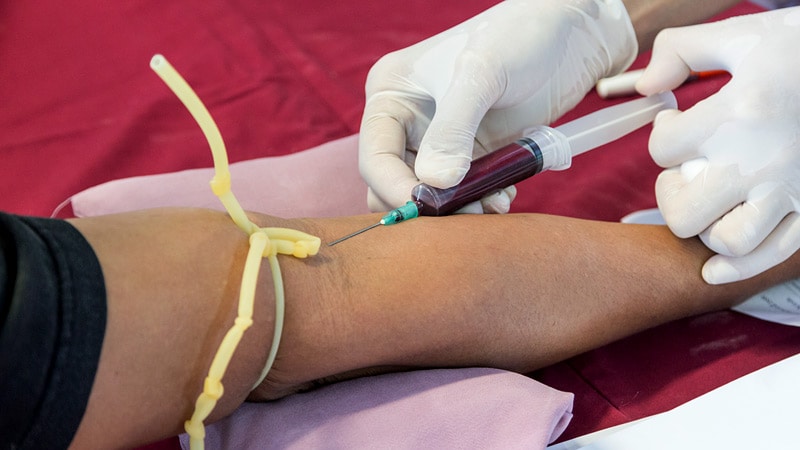 In the future, a simple blood test could be added to the options for colorectal screening and could appeal to the people currently put off by the unpleasant necessities such as collecting a fecal sample, or the bowel prep before an invasive colonoscopy.

The new test, known as LUNAR-2 (Guardant Health), is an assay that measures circulating tumor DNA (ctDNA), and is carried out on a simple blood draw.

It is able to detect early-stage colorectal cancer (CRC) with high accuracy, say researchers who reported new results at the recent annual meeting of the American Society of Clinical Oncology.

The results come from a study of 434 patients who were newly diagnosed with CRC. The blood test had an overall sensitivity for CRC of 91%, observed across all stages, and a specificity of 94%.

“What is most noteworthy is that there were no differences in sensitivity for CRC detection in patients presenting with asymptomatic disease compared to with those patients who were symptomatic, despite the lower cell-free DNA tumor fractions observed in asymptomatic individuals.

Current adherence to CRC screening is lower than recommended, and simpler methods are needed, Kim pointed out. “LUNAR-2 is emerging as a viable alternative for general screening of an average risk population,” he told Medscape Medical News.

“Incorporating a blood test, drawn and completed at a routine doctor’s visit, to the existing screening model would provide an additional screening option, especially encouraging individuals who have overlooked or missed screening recommendations to undergo screening,” Kim said.

The prospective registration study, called the ECLIPSE study, is currently ongoing in the United States. “The primary objective is to evaluate the performance characteristics of the LUNAR-2 test to detect CRC in a screen-relevant, average-risk population,” he added. “Enrollment is expected to be completed at the end of 2021.”

In this latest study, the test was investigated in a cohort of patients who had already been diagnosed with CRC (stages 1-3) between 2013 and 2016. These individuals had consented to provide blood samples prior to surgical resection. Those who were treated with neoadjuvant chemotherapy were excluded from the trial.

A data set for “ctDNA detected” and “ctDNA not detected” was generated by a model trained on a separate sample set (N = 614) that was obtained from both cancer-free individuals and those with CRC, with calling thresholds targeting 90% specificity.

The overall sensitivity of the test was 91%. It detected CRC in 393 of the 434 patients; the sensitivity dropped to 88% in detecting CRC stage I and/or II, but increased up to 93% for CRC stage III.

No differences were observed in sensitivity for asymptomatic CRC (88%) as compared with symptomatic disease (91%; P = .4). However, higher cell-free DNA tumor fractions were detected among patients who were experiencing symptoms. In addition, sensitivity for detected right-sided and left-sided CRC was similar (93% vs. 90%; P = .5).

Commenting on the study, ASCO expert Muhammad Shaalan Beg, MD, noted even though the assay has very good sensitivity and specificity, and there was no difference observed between symptomatic and nonsymptomatic cancer patients, “we have to be very careful in extending these findings into nonsymptomatic healthy patients.”

“Validation studies in a large number of healthy donors is necessary in order to make any claim of this blood-based test’s detection for colon cancer,” said Beg, director for gastrointestinal medical oncology at the University of Texas Southwestern Medical Center, Dallas. “When we are adopting a blood-based biomarker for detection of cancer it’s natural to think about sensitivity because we don’t want to miss a cancer diagnosis after all.”

However, he pointed out that in population-based studies it’s the specificity which drives the value of the test — how often is the disease absent in people who have a normal test? What other noncancer conditions can make the test positive?

“So, while there is no denying the value of a blood-based cancer detection tool, the bar is extremely high for CRC, especially when there are advanced stool-based assays with good sensitivity serving this purpose,” he told Medscape Medical News. “I can imagine a future where both blood and stool are used to stratify individual risk at a population level.”