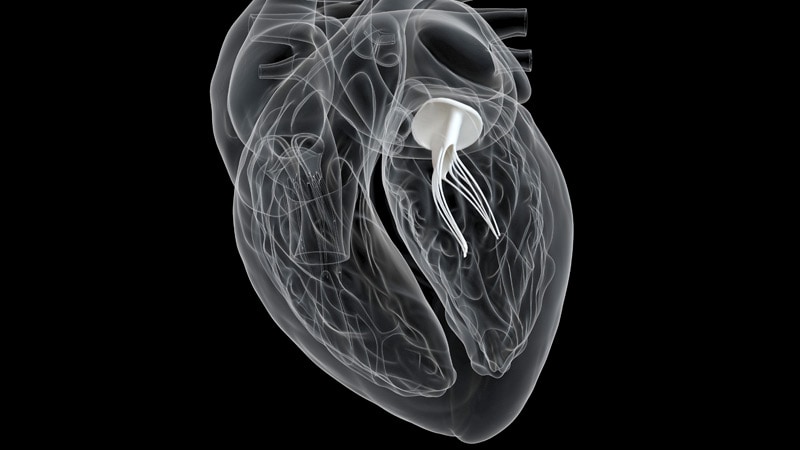 “The outcomes can be considered very acceptable considering the advanced age and underlying comorbidities. The data show that, at 2 years, we still have excellent control of the MR [mitral regurgitation], with more than 93% of patients having no MR at all, and there were no patients with 1+ or greater MR,” said Dr. Muller, director of cardiac catheterization laboratories at St. Vincent’s Hospital in Sydney.

He presented for the first time the 2-year results for the first 100 patients enrolled in the long-term Tendyne Expanded Clinical Study. The 1-year outcomes were reported previously (J Am Coll Cardiol. 2019 Mar 26;73[11]:1250-60).

The transcatheter Tendyne mitral valve system received European marketing approval in early 2020 for commercial use in patients with severe symptomatic MR who aren’t candidates for open surgery or transcatheter mitral repair using the MitraClip device. The Tendyne remains investigational in the United States, where a large phase 3 randomized head-to-head trial of the Tendyne device and the FDA-approved MitraClip is ongoing.

At enrollment, the first 100 patients in the long-term prospective Tendyne study averaged 75 years of age, 66% were New York Heart Association functional class III or IV, 89% had secondary or mixed etiology MR, and 39% had been hospitalized for heart failure during the preceding 6 months. Ninety-two percent of participants had 4+ MR before implantation. The group’s average Society of Thoracic Surgeons Predicted Risk of Mortality score was 7.8%.

The all-cause mortality rate was 27% at 1 year and 39% at 2 years, with 87% of deaths being attributable to cardiovascular causes. At 2 years, 82% of survivors were NYHA class I or II. Their Kansas City Cardiomyopathy Questionnaire score improved by 19.1 points from an average of 49 at baseline. There was no evidence of structural valve dysfunction. Their heart failure hospitalization rate improved from 1.3 events per patient per year to 0.6 per patient-year at 1 year and 0.51 at 2 years.

Discussant Francesco Maisano, MD, was favorably impressed by the acute outcomes of transcatheter mitral valve replacement with the Tendyne device.

“There were very few procedural or in-hospital complications. Success was obtained in almost every patient. There was no procedural mortality. The 30-day mortality of 6.0% was reasonable in patients with a baseline STS score of 7.8%; that’s pretty good, I would say,” observed Dr. Maisano, professor of cardiac surgery at the University of Zürich and a pioneer of catheter-based mitral and tricuspid interventions.

However, he voiced concerns about the 35% incidence of major bleeding and 5% rate of disabling stroke at 2 years, which he deemed “pretty high.”

“This underlies the open issue of anticoagulation following these kinds of procedures. This obviously requires further work in the next years,” he said.

Congress of the European Association of Percutaneous Cardiovascular Interventions (EuroPCR) 2020.

This article originally appeared on MDEdge.com.