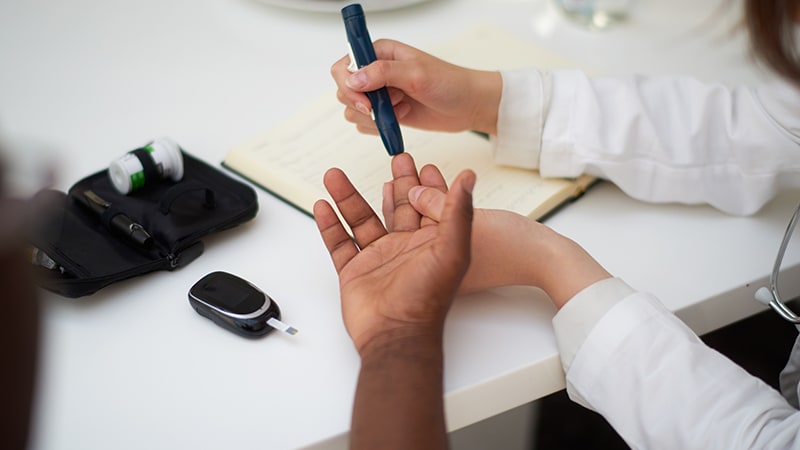 Racial and socioeconomic disparities may be impeding access to newer diabetes medications among U.S. patients who may need them the most, according to researchers at the virtual annual scientific sessions of the American Diabetes Association.

Initiation of DPP-4 inhibitors, GLP-1 receptor agonists, and SGLT2 inhibitors was less likely among racial/ethnic minorities and Medicare Advantage beneficiaries in the retrospective analyses, leading the investigators to call for a better understanding of nonclinical factors that may be influencing treatment decisions.

Odds of new diabetes medication use were 55%-69% lower in patients in Medicare Advantage (MA) as compared to patients in commercial health plans, according to results of a separate study presented by Rozalina McCoy, MD, endocrinologist and researcher with Mayo Clinic, Rochester, Minn.

“The rates of use are increasing over time, but not enough in MA beneficiaries,” she said in her virtual presentation. “I think it really calls for more to be done to ensure access to and use of evidence based medications, by all people with type 2 diabetes.”

The likelihood of initiating a new diabetes drug was 29% lower among African Americans and 49% lower among Native Americans in a study of enrollees in the Look AHEAD (Action for Health in Diabetes) randomized trial, according to researcher Ahmed Elhussein, BMBCh, MPH, of the Johns Hopkins Bloomberg School of Public Health.

“This is particularly concerning, because they might have a greater need for these new diabetes medications, but reduced access,” Dr. Elhussein said in his presentation.

Disparities by Race in Diabetes Drug Use

The prevalence of type 2 diabetes in the United States is higher among racial and ethnic minorities, at about 12%-15%, versus about 7% in whites, according to Dr. Elhussein,

While the newer classes of diabetes medications have a lower risk of hyperglycemia and have cardiovascular and renal benefits, they also come at a higher cost, he added.

“This has created some concerns about access in particular for underserved groups,” he said in his presentation.

In their retrospective analysis, based on 4,892 patients enrolled in the Look AHEAD (Action for Health in Diabetes) randomized trial, Dr. Elhussein and coinvestigators identified 44% who had initiated a newer diabetes medication over a median follow-up of about 8 years.

They found black race was associated with significantly lower initiation of newer medications compared to whites, with a hazard ratio of 0.81 (95% confidence interval 0.80-0.94; P = 0.019), after adjustment for socioeconomic status.

New diabetes medication use was also significantly lower among American Indian/Alaskan Natives, with an HR of 0.51 and a confidence interval that did not include the null value of 1, according to the investigator.

No significant differences in new diabetes drug use were seen in Hispanics or those classified as other race/ethnicity, he added.

“We’d advocate for more study to try to understand what are the drivers of this disparity,” he said. “This would let us develop interventions that might help to increase access in these patient groups that might need them the most.”

Second-line medications, including GLP-1 receptor agonists and SGLT2 inhibitors, have “preferred” efficacy and side effect profiles, but are more costly than older, generic options such as sulfonylureas, which may affect the likelihood of their use, said Dr. McCoy, the Mayo Clinic researcher and lead author of the study on diabetes medication use by insurance type.

They analyzed 1.7 million individuals in a de-identified dataset (OptumLabs Data Warehouse) who were either privately insured or beneficiaries of Medicare Advantage, the private health plan alternative to fee-for-service Medicare.

After adjusting for race/ethnicity, baseline medications, age, gender, and other factors, odds of new medication use were significantly lower in the Medicare Advantage group, according to Dr. McCoy.

“This may be driven by affordability, because patients with Medicare Advantage plans are not able to access prescription savings cards (as compared to Medicare beneficiaries) and they also are more likely to have fixed incomes and not be able to afford the high costs of these drugs,” she said.