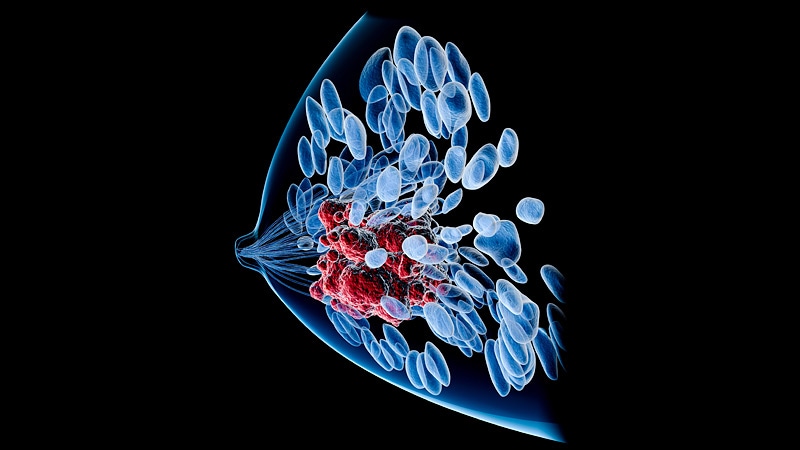 “This is the first double-blind, randomized trial of systemic therapy to our knowledge [that demonstrated] clinically meaningful gains in [overall survival] among patients with [brain metastases], including those with active metastases,” Nancy Lin, MD, associate chief of the division of breast oncology at Dana-Farber Cancer Institute in Boston and colleagues wrote in the Journal of Clinical Oncology.

The findings come from a substudy of the HER2CLIMB trial, which had similar outcomes but didn’t separate women with brain metastases from others. The study won tucatinib’s maker, Seattle Genetics, Food and Drug Administration approval for tucatinib in combination with trastuzumab and capecitabine for patients with unresectable or metastatic HER2-postive disease after failure of at least one treatment for advanced disease. In the United States, tucatinib costs over $18,000 a month, according to GoodRX and other sources.

The newly approved indication for tucatinib includes patients with brain metastases, but Dr. Lin and colleagues drove the point home by analyzing HER2CLIMB data solely in the 291 subjects who had baseline CNS lesions, which occur in up to half of women with advanced HER2-positive breast cancer.

Amy Tiersten, MD, a professor at Mount Sinai Hospital in New York, was not involved in the study but is convinced of the clinical benefit of tucatinib. Tucatinib “will be the standard of care for all patients with brain metastases … regardless of” previous treatments, she said.

“It’s a total game changer. The addition of tucatinib made a large difference, including a hefty impact on overall survival. It will be interesting to see if this drug will be useful in earlier stages to help prevent brain metastases,” Dr. Tiersten said.

Among the large benefits she alluded to, the median CNS progression-free survival (PFS) — free of lesion progression or death — was 9.9 months with tucatinib versus 4.2 months with placebo (P < .00001).

At 1 year, 40% of tucatinib patients, but no patients in the placebo arm, were alive and free of CNS progression. Tucatinib reduced the risk of intracranial progression or death by 68%.

Among the 117 patients who entered the trial with stable, treated brain metastases — most by radiation, the rest by surgery — the median CNS PFS was 13.9 months with tucatinib versus 5.6 months with placebo (P = .002). In this group, the median overall survival was 15.7 months in the tucatinib arm and 13.6 month in the placebo arm (P = .70).

“Overall survival [in stable patients] numerically favored tucatinib to a small extent, but this did not reach statistical significance, albeit in a relatively small number of patients,” Dr. Lin said in her presentation.

Between-arm differences were significant in the 174 patients who entered the trial with active brain metastases, which refers to those that were either known but untreated, newly discovered on baseline MRI, or progressed after treatment. At 1 year, 35% of these patients in the tucatinib arm were still alive and free of CNS progression; however, there were no such patients in the placebo arm.

The median CNS PFS among patients with active brain metastases at study entrance was 9.5 months with tucatinib versus 4.1 months in the placebo arm (P < .0001). The median overall survival was 20.7 months and 11.6 months, respectively (P = .004).

Intracranial response was confirmed by MRI in 47% of tucatinib-treated patients with active brain metastasis at baseline versus 20% of patients on placebo (P = .03).

Thirty subjects — 21 on tucatinib and 9 on placebo — returned to their study arm after radiation for brain lesion progression.

The risk of second progression or death was reduced 67% when patients restarted tucatinib instead of placebo.

As for why tucatinib helps, she and her colleagues speculated that, because tyrosine kinase inhibitors are small molecules, they can cross the blood brain barrier and effectively treat CNS lesions, while larger, antibody-based anti-HER2 agents, such as trastuzumab and pertuzumab, cannot.

Study entry required prior treatment with trastuzumab, pertuzumab, and ado-trastuzumab emtansine, as well as an Eastern Cooperative Oncology Group performance score of 0 or 1. More than 99% of the subjects in the analysis were women, and the median age was 52 years.

The treatment groups were well balanced. A bit over half of the subjects in both arms were in North America, and 57% were estrogen and/or progesterone receptor positive. Adverse events were reported previously.

M. Alexander Otto can be reached at aotto@mdedge.com. This article originally appeared on MDedge.