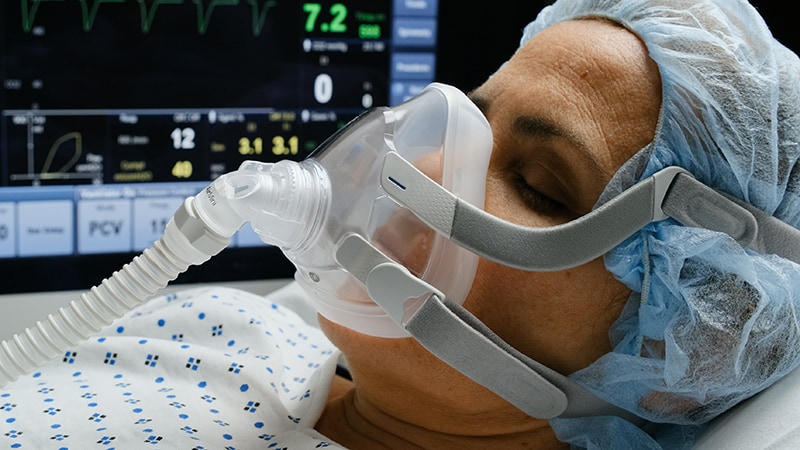 Fearful that New Orleans would run out of ventilators by early April as the number of COVID-19 patients rose by the hundreds, even thousands, per day, Louisiana officials set out to get every device they could find. At the time, that meant securing an additional 14,000.

Within days of President Donald Trump’s urging states to get their own supplies because it would “be faster if they can get them directly,” Louisiana sought only a fraction of them from the federal government and turned to private companies for the rest, having little confidence one supplier would give the state all it needed.

“If I knew for a fact that I could get all that I wanted from one vendor, I wouldn’t be ordering from another,” Gov. John Bel Edwards said March 31.

Louisiana set out to buy 9,000 from the private sector, where each device can cost tens of thousands of dollars.

“Medtronic Ventilators — $88,000,000 for 2,000 ($43,500 a piece)!” Christina Dayries, a senior state official for homeland security and emergency preparedness, wrote March 27 to two colleagues about one type of high-acuity ventilator from medical device behemoth Medtronic, according to emails between Louisiana and Federal Emergency Management Agency officials on the state’s pandemic response that KHN obtained through a public records request. The total order for the ventilators and related accessories amounted to $88.2 million.

The ventilator price is 23% higher than the $35,383 average price Medtronic was offering for the same model last year, according to market analysis from ECRI, a nonprofit research firm.

Laws prohibit price gouging on precious resources during times of emergency — such as gas prices during an oil shortage or water during a drought. But no such rules or laws applied as states like Louisiana — which got an $88.2 million quote while bracing for a deadly pandemic — scrambled to find essential medical equipment according to the laws of supply and demand.

One state health official said they didn’t think there was “egregious price gouging” from manufacturers, but officials nonetheless had little choice but to pay what was asked. Louisiana also overshot orders out of fear that ventilators wouldn’t arrive or that they would be sent elsewhere to a higher bidder.

Louisiana’s hunt for thousands of ventilators underscores the crisis triggered by the federal government’s lack of a coordinated response to the pandemic. It speaks to the “every man for himself” mentality promoted by the White House.

As Jared Kushner, Trump’s son-in-law and a senior adviser, said in a daily press briefing April 3: “The notion of the federal stockpile was, it’s supposed to be our stockpile. It’s not supposed to be states’ stockpiles that they then use.”

Officials from other states, including Washington, Michigan and Minnesota, said in interviews that they have also ordered millions of dollars’ worth of ventilators from private companies even as the Trump administration snapped up thousands of its own to replenish the Strategic National Stockpile.

“The most important thing in a disaster is clear communication,” she said.

“We found ourselves competing against not only other states but hospital systems and even the federal government,” said Dr. Joseph Kanter, an emergency physician and assistant state health officer for the Louisiana Department of Health.

“The private sector can be a dizzying place,” he added. “When it’s life and death, there needs to be some measure of additional coordination.”

In a statement, Medtronic said the Louisiana price was given before the company in April moved to single, flat prices under which every U.S. customer pays the same cost for a particular ventilator model and configuration. The company would not provide the figure, but said the prices are lower than before the pandemic.

Panic at the Peak

At the peak of its ventilator use in early April, Louisiana had 571 patients on the devices and nearly 12,500 confirmed COVID-19 cases. Already more than 1,700 people had been hospitalized, and officials braced for hundreds more if the virus spread at the same pace.

In interviews, state officials and health care executives described harrowing situations where they not only shuffled ventilators between hospitals but also transferred patients to avoid maxing out capacity at any one place, with one person likening it to a “two-alarm fire.”

Dr. Abdul Khan, medical director of the Ochsner Medical Center West Bank’s ICU, recalled that they were down to “a handful” of ventilators when more were rerouted to them from other properties. The nonprofit health system, Louisiana’s largest, had more than 200 patients statewide on ventilators at the peak, he said.

“If somebody got down to their last two or three vents at any one point and still had COVID patients on the floor that could go back, we got them some more vents,” or sometimes a patient in need was moved to a hospital with a surplus, said Dr. John Heaton, president of clinical and system operations for LCMC Health, which has five hospitals in the New Orleans area. “We moved more patients than we moved ventilators.”

Many hospitals are part of larger health systems, where management could more easily redistribute materials as needed, a cushion that doesn’t exist everywhere.

Well before the pandemic, U.S. acute care hospitals had roughly 62,000 full-featured mechanical ventilators on hand, according to a 2009 American Hospital Association survey.

State officials said they never expected the federal stockpile to supply every state with all it needed, but the lack of coordination to route supplies to the most urgent hot spots and opaque communication compounded the problem. In March, the stockpile contained 16,660 ventilators immediately available; the federal government has deployed 10,640 to localities nationwide since the start of the pandemic, according to an HHS spokesperson.

New York City’s public health care system “balanced the load among our 11 hospitals by moving 599 patients from one hospital to another,” said Mitchell Katz, CEO of NYC Health + Hospitals. “We actually took transfers from several independent hospitals including St. Barnabas, Jamaica, Flushing and Brookdale when they got overwhelmed. Because they are independent hospitals they could not balance the load when things got hard.”

Washington state initially received 500 ventilators from the national stockpile but returned 462. Officials also bought roughly 920 ventilators from several companies for $23.5 million, with the price for each device ranging from $4,900 to $40,200. The most expensive one is the same Medtronic ventilator that Louisiana ordered, but Washington was charged a slightly lower price.

Only a fraction of Washington state’s ventilators have been received and paid for. Multiple state officials also said they believed they would be reimbursed 75% of the cost under existing FEMA guidelines for the pandemic. A FEMA spokesperson did not respond to questions.

Preparedness often means building up an oversupply. Louisiana said in March it ordered 14,000 ventilators based on COVID case projections at the time. After the state closed schools and implemented a stay-at-home policy, the spread of the virus began to slow. The state canceled the Medtronic order, along with several others, once Louisiana’s curve began flattening.

The state ended up receiving and paying for only about 400 ventilators from the private sector, said Kanter, at a maximum price of about $11,000 each. It received another 350 from the stockpile.

But now that states have begun to reopen their economies, many state officials and hospital administrators fear a reprise.

In mid-May, Louisiana began the first phase of reopening its economy, allowing gyms, hair salons, casinos and other businesses to reopen with limits on occupancy. Few in the state believe an outbreak on the same scale as two months ago will occur again because of its incremental relaxing of social distancing measures, yet concede that infections could rise. Arizona, Texas and North Carolina are among the states seeing a resurgence in cases and hospitalizations.

The Trump administration has taken steps to strengthen the government’s response. They include invoking the Defense Production Act to force companies to manufacture ventilators and medical masks, and bolstering the Strategic National Stockpile. FEMA and the American Hospital Association recently established a limited program where hospitals can exchange ventilators if needed. Roughly 3,000 ventilators are available currently, but no hospital has requested one, according to an AHA spokesperson.

Still, burned once, officials are skeptical that supply will address their needs during another wave of COVID infections.

There are concerns about the quality of the machines hastily added to the national supply under federal contracts. Some device experts say some won’t meet the needs of COVID patients.

Such is the case with the nearly 1,100 ventilators HHS ordered from Medtronic under a $9.1 million contract, a portable device that wasn’t previously available in the United States. The model, which federal contract records identify as Medtronic’s PB560 ventilator, is less sensitive than the PB980 version Louisiana officials initially ordered.

“This is basically the difference between the Volkswagen Beetle on the one side and a Formula One race car on the other side,” said Dr. Marcus Schabacker, CEO of ECRI, of the two Medtronic models. “PB560 is probably not going to be sufficient to treat them.”

An HHS spokesperson said the federal government has multiple ventilator contracts and diversifying “is good practice to ensure we have a sufficient supply of ventilators for use in this pandemic and future pandemics when and where needed.” Medtronic said the PB560 and other models are suitable for institutional settings and a range of patients.

Medtronic said it expects to manufacture more than 1,000 ventilators a week by the end of June. The company is prioritizing production of its pricier PB980 model and the more portable PB560, saying they will “generally be produced in similar volumes.”

Overall, HHS has entered into $2.9 billion worth of contracts with several companies — including Medtronic, GM, General Electric, Philips and Vyaire Medical — for nearly 200,000 ventilators by year’s end, according to a review of HHS announcements and federal contract records. To date, 16,000 have been produced, according to an HHS spokesperson.

“If that’s your Plan A, there’s a risk that those ventilators, they may not all be usable, they may not be available in time, and so on and so forth,” said Daniel Adelman, a professor at the University of Chicago Booth School of Business who recently estimated that thousands of people could be saved if the U.S. adopted widespread ventilator sharing. “There should be a Plan B.”

Others worry that even with an expanded stockpile, there is no plan to distribute them rationally. Without that, said Nezih Altay, a professor of operations management at DePaul University in Chicago: “The same mess, we’ll see again.”

Many states and hospital systems are preparing to go it alone.

“Sometimes waiting on the authorities to help you is not the best strategy,” Heaton said. “You’ve gotta help yourself.” In mid-March, LCMC Health bought 50 Medtronic PB980 ventilators at a cost of nearly $1.75 million, according to a hospital spokesperson.

In Minnesota, state officials bought 800 ventilators from Vyaire and Ventec for $9.5 million, according to a state spokesperson. The cost per device was between $11,308 and $12,392.

“We just made a decision,” said Judy Seaberg, a health care system preparedness program manager for the Minnesota Department of Health. “We felt we needed to do this to have some assurance that we could meet the needs of our population.”

How serendipity sent this oncologist in search of a cure for cancer
Man Loses Ability To Walk After Excessive Vitamin B6 Intake: Report
Turning 30? Here’s what you need to know…
‘An Unreasonable Amount of Work That’s Expected to Be Done’: What We Heard This Week
Are Diabetes Medications Safe? Possible Cancer-Causing Ingredient Found In Merck Drugs