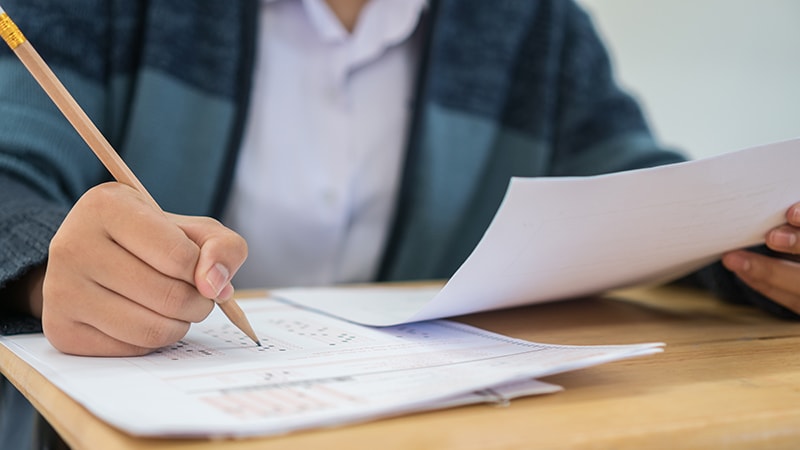 A spokesperson for the National Board of Medical Examiners (NBME) told Medscape Medical News, “Last week, in order to make testing more rapidly and widely available, the USMLE program announced plans to provide its exams at reduced length at certain test sites by excluding unscored questions.

“After hearing the concerns of examinees about perceived inequities, we have decided to administer standard length forms that include unscored questions at all testing sites. While we have evidence to support the score comparability and test fairness of the original plan, we do not want to take an action that may cause additional stress or confusion. We appreciate the feedback and remain committed to supporting fair and standard testing conditions to every extent possible while we address the situation this pandemic has created.

The original plan was met with immediate backlash on social media.

Last Thursday, the NBME announced that a shorter version of the examinations would be made available to those participating in event-based testing held at medical schools in July and August.

Some critics argued that students taking shorter exams would have an advantage on a test that can greatly influence their path as physicians.

COVID-19 resulted in the closing of many sites by Prometric, the organization that facilitates USMLE testing, forcing students to upend plans or delay steps.

Although a gradual reopening has begun at Prometric, a backlog remains. The USMLE has responded with a “phased-in plan.” The intent is to enable students to have the necessary testing completed prior to applying for residency in the fall. Phase 1 includes regional testing at approximately six medical schools, using Prometric equipment. Phase 2 involves administering 1-day, large event-based tests for Step 1 and Step 2 CK at medical schools. Those were the tests slated to be shorter, prior to the USMLE’s reversal of its decision.

The announcement of shorter tests and different test content set off an uproar on social media.

Evan Keil, whose profile says he is a “newly minted M3” student, was among those launching criticism of the announcement on Twitter.

He tweeted: “EQUITY?! Equity for test-takers would look like nothing else but moving to Pass/Fail. The ghosting, the cancellations, the indecisiveness, the formation of two different length tests - it all needs to stop.”

EQUITY?! Equity for test-takers would look like nothing else but moving to Pass/Fail.

The ghosting, the cancellations, the indecisiveness, the formation of two different length tests – it all needs to stop.

Thank you for coming to my TedTalk. Amen. #MedTwitter https://t.co/GhhCivD1Vz

Bryan Carmody, MD, MPH, an assistant professor at Eastern Virginia Medical School in Norfolk, Virginia, told Medscape Medical News, “The test is a grueling test. Part of the testing experience is endurance, in doing these questions in a high-pressure, high-stakes environment with no time to spare all day long. Cutting that off by even a couple of hours seems like it would give the students who test that way an unfair advantage.”

The change and subsequent rapid reversal is the latest in a series of decisions by the USMLE that has left students confused and upset. Those affected are still waiting for further clarity and guidance on testing availability. Today’s statement from the NBME indicates that they are aware of the concern. “We remain committed to expanding USMLE testing capacity and keeping you informed of our plans.”

Marcia Frellick is a freelance journalist based in Chicago. She has previously written for the Chicago Tribune and Nurse.com and was an editor at the Chicago Sun-Times, the Cincinnati Enquirer, and the St. Cloud (Minnesota) Times. Follow her on Twitter at @mfrellick.

How Does Climate Change Affect Spread Of Infectious Diseases?
‘Silent’ spread of polio in New York drives CDC to consider additional vaccinations for some people
Watch: How nursing homes put friends and families on the hook for residents’ debts
New US monkeypox vaccine strategy could be huge boost for supply, but much is unknown
Polio detected in New York City sewage suggesting local circulation of virus, health officials say