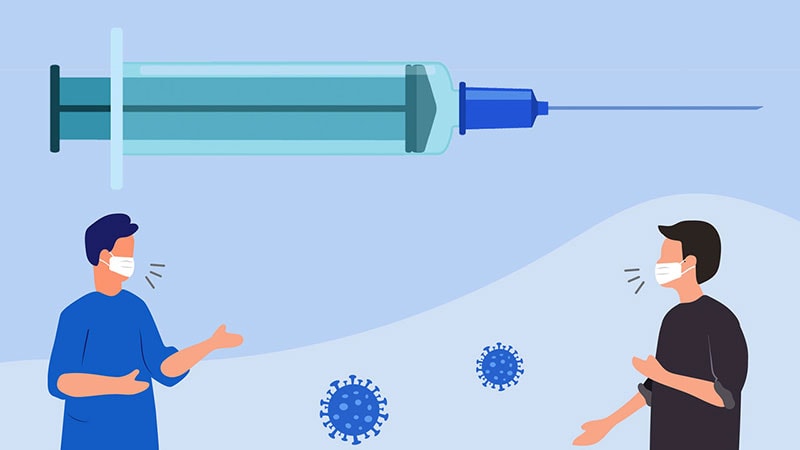 Relaxation of nonpharmaceutical interventions once vaccination of the population has reached a tipping point short of herd immunity can increase the probability of the emergence of a resistant strain that natural selection then favors, according to new findings of a modeling study published online on July 30 in Scientific Reports.

Although vaccination is the best strategy for controlling viral spread, changes in our behavior and mindset will be increasingly required to stay ahead of vaccine-resistant strains, according to the four authors of the report.

“We have become accustomed to thinking of the pandemic from the point of view of epidemiology, and advised to reduce transmission and the number of people getting sick and the death rate. As the pandemic spreads across years, there will be a new dimension to our thinking, both for policymakers and the public. And that’s the evolutionary perspective,” said co-author Fyodor Kondrashov, PhD, an evolutionary biologist at the Institute of Science and Technology (IST), Klosterneuburg, Austria, at a press briefing Thursday.

The coming “change of mentality” that Kondrashov foresees should reassure people that masking and social distancing even after being vaccinated aren’t futile. “It decreases the possibility that a vaccine-resistant strain is running around. We’re not just trying to prevent the spread, but the evolution of novel variants, which are so rare at this point that we haven’t yet identified them,” he said.

The study focused on evolution generically, rather than on specific variants. “We took the classical model used to study epidemiology of pandemics, the SIR [susceptible, infected, recovered] model, and we modified it to study the dynamics of rare mutations associated with emergence of a vaccine-resistant strain,” Simon A. Rella, the lead author of the study and a PhD student at IST, explained at the briefing.

The researchers simulated the probability that a vaccine-resistant strain will emerge in a population of 10,000,000 individuals over 3 years, with vaccinations beginning after the first year. For eight scenarios, rates of infection, recovery, death, vaccination, and mutation and the percentage of individuals with resistant viral strains were factors in the model.

The model also simulated waves of low and high transmission, similar to the effects of large-scale interventions such as lockdowns.

The study showed that a trio of factors increases the probability of a vaccine-resistant strain taking hold:

These factors, Rello said, are obvious to some degree. “Every infected individual is like a mini-bioreactor, increasing the risk that mutations will appear that will endow the virus with the property of avoiding the immune system primed by a vaccine,” he said.

Not as obvious, Rello added, is that when most people are vaccinated, a vaccine-resistant strain has an advantage over the original strain and spreads faster.

But we can stop it, he said. “Our model shows that if at the time a vaccine campaign is close to finishing and nonpharmacological interventions are maintained, then there’s a chance to completely remove the vaccine-resistant mutations from the virus population.”

In scenarios in which a resistant strain became established, resistance initially emerged after about 60% of the population had been vaccinated. That makes nonpharmaceutical interventions such as masking and social distancing vitally important. Just under 50% of the US population over the age of 12 has been fully vaccinated, according to the Centers for Disease Control and Prevention.

“Our results suggest that policymakers and individuals should consider maintaining non-pharmaceutical interventions and transmission-reducing behaviors throughout the entire vaccination period,” the investigators conclude.

“We hope for the best, that vaccine resistance has not developed, but caution that evolution is a very powerful force, and maintaining some precautions during vaccination may help to control that evolution,” said Kondrashov.

The investigators are relying on epidemiologists to determine which measures are most effective.

“It’s necessary to vaccinate as many people as fast as possible and as globally as possible and to maintain some level of nonpharmaceutical intervention to ensure rare variants have a chance to be suppressed instead of spread,” concluded Kondrashov.

He’s pessimistic because many countries are still having difficulty accessing vaccines, and vaccine efficacy wanes slightly over time. The authors warn that “the emergence of a partially or fully vaccine-resistant strain and its eventual establishment appears inevitable.”

The worst-case scenario is familiar to population biologists: rounds of “vaccine development playing catch up in the evolutionary arms race against novel strains,” the authors write.

Limitations of the study are that some parameters of the rate of evolution for vaccine-resistant strains aren’t known, and in creating the model, consideration was not given to effects of increased testing, rigorous contact tracing, rates of viral genome sequencing, and travel restrictions.

Rather, the model illustrates general principals by which vaccine resistance can evolve, Kondrashov said.