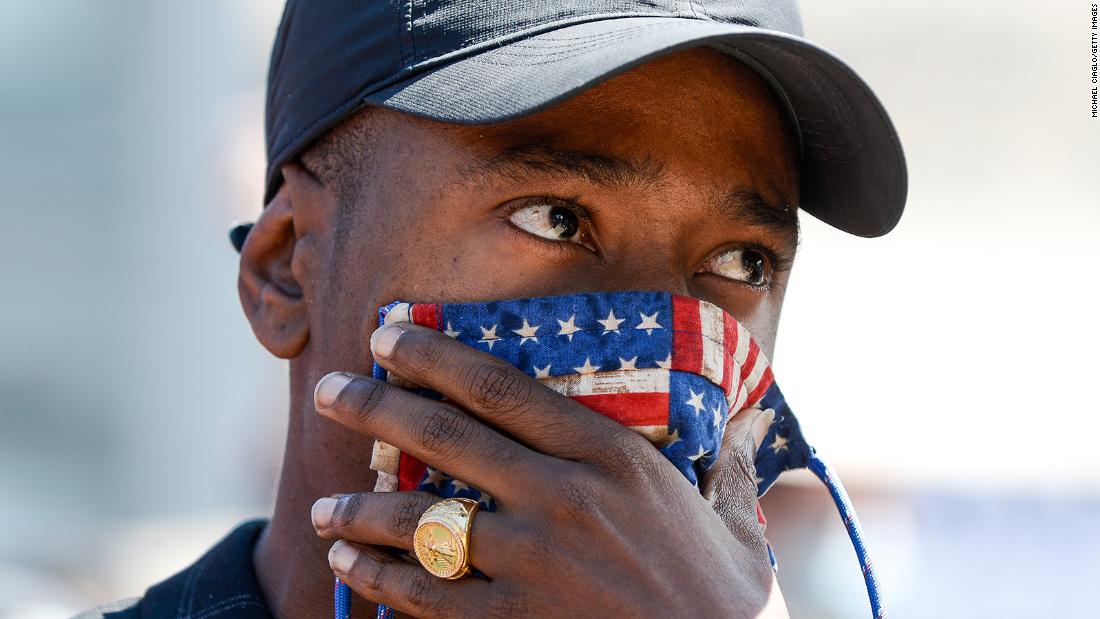 Health, Fitness & Food
Share on Facebook
Share on Twitter
Share on Pinterest
Share on LinkedIn
But the situation would have been much worse had states not shut down, a new study says.
More than 1.9 million Americans have been infected, and more than 110,000 have died in just over four months, according to data from Johns Hopkins University.
Nationwide, 22 states are seeing upward trends in coronavirus cases. About 20 states have seen decreases in recent days, and eight states are holding steady.
Track the virus in your state and across the US
One of the states with the biggest spikes in new cases is Florida. The number of new cases reported each day has increased an average of roughly 46% over the past week, just as most of the state entered a second phase of reopening.
And there’s global proof that the coronavirus pandemic is nowhere near over.
Sunday marked the most Covid-19 cases reported to the World Health Organization in a single day during this pandemic, WHO Director-General Tedros Adhanom Ghebreyesus said.
“Yesterday, more than 136,000 cases were reported — the most in a single day so far,” Tedros said Monday. “Almost 75% of yesterday’s cases come from 10 countries, mostly in the Americas and South Asia.”

Shutdowns and school closures have helped

About 60 million US coronavirus infections were likely averted through early April thanks to emergency orders, researchers from the University of California, Berkeley said.
“The findings come as leaders worldwide struggle to balance the enormous and highly visible economic costs of emergency health measures against their public health benefits, which are difficult to see,” UC Berkeley said.
Those emergency orders included business and school closures, travel restrictions and shelter-in-place orders.
“The study did not estimate how many lives might have been saved by the policies because, with so many infections, fatality rates would be much higher than anything observed to date,” UC Berkeley said.

While protesters flood streets to demand an end to systemic racism and police brutality, health officials emphasize the need to take precautions.
This coronavirus is transmissible by talking or even just breathing. Carriers of the virus can be contagious even if they don’t have symptoms.
So doctors say it’s extremely important to wear a face mask and try to keep your distance from others as much as possible.
The US Centers for Disease Control and Prevention said Sunday it was closely monitoring the protests.
CDC Director Dr. Robert Redfield said earlier this month that protesters should be evaluated and tested for the virus.
“I do think there is a potential, unfortunately, for this to be a seeding event,” especially in metropolitan areas where there has been significant transmission, Redfield said.
Your top coronavirus questions, answered

While big cities on the coasts were hit hard early in the pandemic, the past few weeks have seen wider spread in inland states, including Arkansas, Texas and Arizona.
In Utah, state Rep. Suzanne Harrison called a recent spike of cases “very concerning (and) approaching exponential.”
“Today’s 18.5% positive test rate is double yesterday’s (9.4%),” she tweeted over the weekend.
Friday, health officials in Utah said they were “very concerned” about the rise in new cases over the past week.
The state has recorded more than 12,000 infections, according to Johns Hopkins.
“When you’re away from home, please avoid close contact with others, and wear a mask when other social distancing measures aren’t feasible,” the Utah Department of Health tweeted.
Several universities have also reported new cases within their athletic programs — including Arkansas State University, Auburn University and Oklahoma State University.

An important drug could run out

The US government’s current supply of remdesivir, the only drug known to work against coronavirus, will run out at the end of the month, said Dr. Robert Kadlec, a US Department of Health and Human Services official.
The government’s last shipment of the drug will go out the week of June 29. Gilead Sciences, the company that makes the drug, is ramping up to make more, but it’s unclear how much will be available this summer.
The US Food and Drug Administration gave emergency authorization for remdesivir last month. The drug, an intravenous antiviral medication studied to treat Ebola, is now used on hospitalized Covid-19 patients. A study has shown it helps cut down the length of hospital stays.
The government has been working to help Gilead “with some of their supply chain challenges in terms of raw materials and being able to accelerate the process,” Kadlec said.
But “whatever the supply may be, there may not be enough for everyone who may need it.”