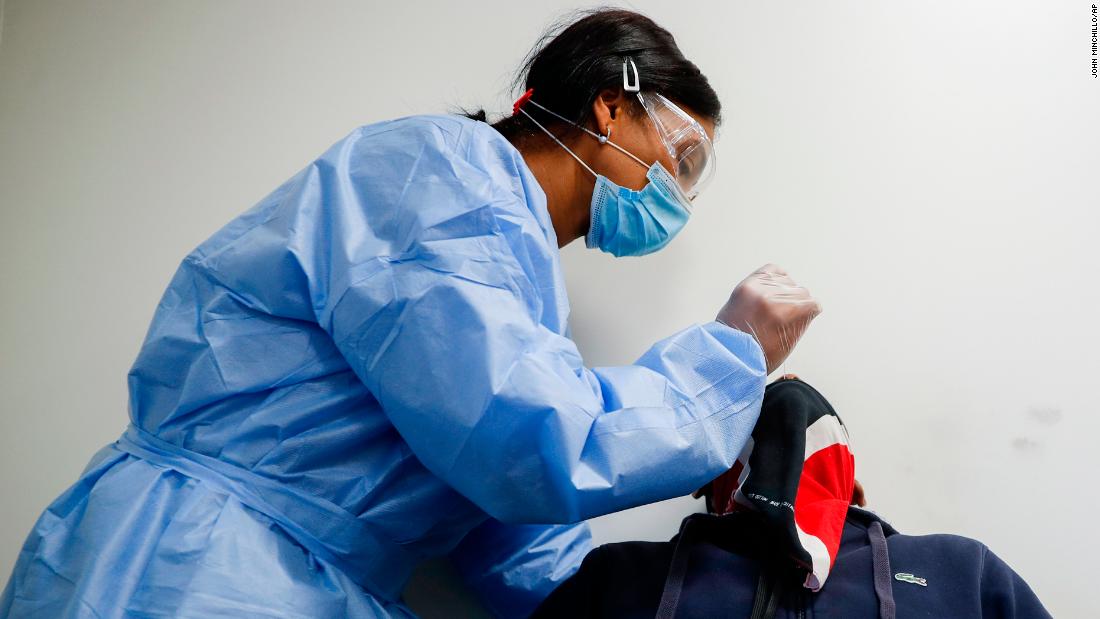 Health, Fitness & Food
Share on Facebook
Share on Twitter
Share on Pinterest
Share on LinkedIn
More than 2 million people in the US have been infected by the virus and at least 114,875 have died from it, according to data from Johns Hopkins University. A forecast published by the Centers for Disease Control and Prevention on Friday projects the death toll could increase to 130,000 by July 4.
Dr. Anthony Fauci, director of the National Institute of Allergy and Infectious Diseases, said a recent increase in coronavirus cases in a number of states is not necessarily a “second spike.”
“However, when you start to see increases in hospitalization, that’s a surefire situation that you’ve got to pay close attention to,” Fauci told CNN on Friday.
Fauci also said there may not be a so-called second wave of Covid-19 cases as some health experts are predicting.
“It is not inevitable that you will have a so-called ‘second wave’ in the fall or even a massive increase if you approach it in the proper way,” he said.
He advised Americans to follow social distancing recommendations and to continue wearing masks in public, among other CDC guidelines.
Meanwhile former CDC Director Dr. Julie Gerberding, an infectious disease expert who now is an executive vice president at Merck & Co Inc., said Friday that the industry’s collaborative efforts and the 130 vaccines in different stages of production points make her cautiously optimistic the pandemic will end with a vaccine.
“I think the science is on our side, but that doesn’t say anything about the speed, the safety, and the durability and all of the other criteria that have to come into play before we have something that we can count on to give us that population immunity,” Gerberding said.
There are plenty of roadblocks that can arise between lab testing and putting a product out into the public, she said.
“So, a little scientific humility is also an important component of the communication,” she said.

As of Saturday morning, at least 13 states were showing an upward trend in average daily cases — an increase of at least 10% — over the previous seven days, according to an analysis of Johns Hopkins University data.
But at least 24 states’ average daily cases declined more than 10% over those seven days, the data showed.
This is happening while coronavirus testing in the United States is on the upswing. The number of new tests reported per day in the country has generally tripled since mid-April, according to data collected by the Covid Tracking Project.
New York, once the epicenter of the virus in the US, now has the nation’s lowest rate of transmission, Gov. Andrew Cuomo said multiple times this week.
On Saturday, the number of Covid-related hospitalizations in New York were at 1,734, the lowest since March 20.
“We’ve done it. We have tamed the beast. We are now 180 degrees on the other side,” he said.
Elsewhere, numbers have been climbing.
Arkansas Gov. Asa Hutchinson said Friday that the state had a record number of cases reported in the previous 24 hours.
In some places, spikes in cases have delayed reopenings.
Oregon Gov. Kate Brown put a seven-day pause on moving forward with reopening in light of a rise in cases that followed loosening of restrictions.
“This is essentially a statewide yellow light,” Brown said Friday during a news conference.
And in Baltimore, after an 8% increase in cases since June 5, Mayor Bernard C. Young announced Friday that the city would not be moving into phase 2 of reopening with the rest of the state.
“Let me be crystal clear with everyone: I, more than almost anyone, would love to see that Baltimore City is open and safe, but that simply is not what the data is telling us at this time,” the mayor said.
CDC officials are not confirming striking increases in hospitalizations related to the virus across the country, but they will “monitor very closely,” Dr. Jay Butler, CDC’s deputy director for infectious diseases, said Friday during a call with reporters.

The US Surgeon General has weighed in on recent questions over how frequently Covid-19 is spread by people without symptoms.
“We now know that this disease has a high degree of asymptomatic spread, which is why we encourage people to wear face coverings,” US Surgeon General Dr. Jerome Adams said in an interview published Friday by Detroit TV station WJBK.
It wasn’t clear whether Adams was referring to truly asymptomatic people — those who never show symptoms — or whether his assessment also included pre-symptomatic people, who eventually show symptoms but may be contagious before that.
On Monday, the World Health Organization sparked confusion when a top official said during a media briefing that “it still seems to be rare that an asymptomatic person actually transmits onward to a secondary individual.” The next day, the official, Maria Van Kerkhove, clarified that “this is a major unknown.”
On Wednesday, Fauci told ABC that evidence shows 25% to 45% of infected people likely don’t have symptoms, “and we know from epidemiological studies they can transmit to someone who is uninfected even when they’re without symptoms.”
“So to make a statement to say that’s a rare event was not correct,” he told ABC’s “Good Morning America.”

Most Americans are following guidelines

Most Americans are adhering to CDC guidelines introduced to mitigate the pandemic, according to a survey from the CDC.
In the survey released Friday, close to 80% of Americans surveyed nationwide said they had self-isolated last month and 85% of New Yorkers said they had when the survey was conducted in May.
Nationwide, 74% of those surveyed said they wore face coverings in public either always or often and those in the hard-hit cities of New York and Los Angeles said they did so about 90% of the time.
And 84.3% of those surveyed believed their state’s mitigation strategies were the right balance or even not restrictive enough, the survey team, led by the CDC’s Michael Tynan, said in the agency’s weekly report.
“Most adults reported they would not feel safe if government-ordered community mitigation strategies such as stay-at-home orders and nonessential business closures were lifted nationwide at the time the survey was conducted, although a minority of these adults who did not feel safe wanted these restrictions lifted despite the risks,” the team concluded.

Inno Supps Review: The natural way to cleanse and rejuvenate your body
National follow-up study identifies risk factors for a prolonged COVID-19 recovery
B Vitamins Show Promise Against Advanced Fatty Liver Disease
A cut above: Making drug discovery more efficient using CRISPR
What is minority stress and how does it effect the LGBTQIA+ community?