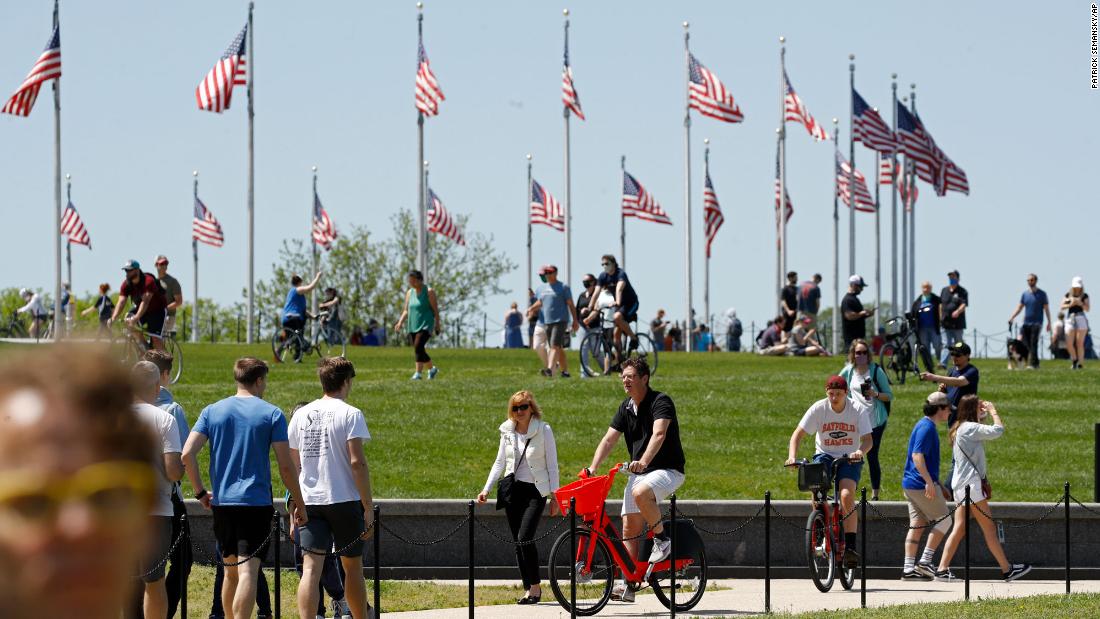 Health, Fitness & Food
Share on Facebook
Share on Twitter
Share on Pinterest
Share on LinkedIn
In the past two weeks, governors across the country introduced plans for phased reopenings amid mounting pressure from residents and businesses who are fearful of devastating economic impacts of lockdowns.
But easing restrictions now may come with a heavy price.
“It’s the balance of something that’s a very difficult choice,” Dr. Anthony Fauci, the country’s leading infectious disease expert, told CNN Monday night. “How many deaths and how much suffering are you willing to accept to get back to what you want to be some form of normality, sooner rather than later?”
At least 42 states will have eased restrictions by this coming Sunday, ranging from simply opening state parks to allowing some businesses to restart. This includes California — the first state to implement a sweeping stay-at-home order — where some stores will be allowed to reopen this week.
The US could now see 134,475 deaths by early August — nearly double the prediction just last week of 74,000 deaths by a model from the University of Washington’s Institute for Health Metrics and Evaluation.
Tracking the virus>>>
An internal Trump administration document obtained by The New York Times also projected that cases and deaths will rise in the next weeks, with the death toll reaching 3,000 daily victims by June 1.
States are easing restrictions even though many areas have yet to hit their projected peaks — meaning there’s plenty of room for overwhelming infection rates, said Dr. Manisha Juthani, an infectious diseases physician at the Yale School of Medicine.
“(People’s increased) mobility and bringing the virus potentially from one area of the state to another area of the state is something that can really change this entire trajectory” for the worse, Juthani told CNN’s “New Day” Tuesday.
So far, the US has recorded more than 1,181,800 infections and at least 69,079 deaths. Over the weekend, parks in New York City and Atlanta drew crowds as residents began venturing out of their homes. In the city of Miami Beach, more than 7,300 warnings were issued to people who weren’t wearing face covers, while more than 470 warnings were given to those who failed to practice social distancing.
Discarding social distancing measures too quickly can result in a rebound of cases, Fauci said. And a rebound is highly likely with a virus that can spread “like wildfire.”
The answers to your coronavirus questions

More coronavirus vaccine candidates are tested in the US

Researchers continue to race for a potential coronavirus vaccine — and another group of candidates is being tested in people in the United States.
US pharmaceutical giant Pfizer and German biotechnology company BioNTech have begun testing four coronavirus vaccine candidates in humans in New York and Maryland, the companies said Tuesday.
The trial had already started in patients in Germany last week. The Phase 1/2 study is designed to test the safety, effectiveness and best dose level of the four vaccine candidates.
The first stage of the US trial will enroll up to 360 healthy adults, starting with ages 18 to 55 and eventually including ages 65 to 85, the companies said.
These companies aren’t the first with a vaccine program this far along.
The US National Institutes of Health started human testing of one vaccine candidate in the United States in March. In the United Kingdom, Oxford University’s Jenner Institute began testing its vaccine candidate in humans in April.
The World Health Organization says 108 potential Covid-19 vaccines are in development around the world — up from 102 on April 30. Eight of the potential vaccine programs have been approved for clinical trials, WHO says.
Fauci, a member of the White House’s coronavirus task force, last week suggested January as a potential date for a vaccine, but vaccines typically take years to produce.
Meanwhile, researchers may be learning more about how soon Covid-19 spread outside China.
Doctors at a Paris hospital say they’ve found evidence that a patient who was there in December was infected with Covid-19. The man had not been to China.
If verified, this finding would show that the virus was already circulating in Europe at that time — well before the first known cases were diagnosed in France or hotspot Italy.
The first official reports of Covid-19 in France had come on January 24, in two people who had a history of travel to Wuhan, China.

How governors are moving forward

California was one of the states where crowds gathered over the weekend as thousands of protesters descended on the state’s Capitol and an Orange County beach to protest social distancing orders.
The governor on Monday announced retail shops in the state — including clothing stores, florists and book shops — can begin to reopen Friday, after health officials said the state was meeting important metrics including sufficient test and tracing capacity.
Los Angeles Mayor Eric Garcetti said he didn’t think his city would reopen this week, saying Monday that despite the governor’s announcement, different parts of the state may see different time lines for reopening.
In Michigan, Gov. Gretchen Whitmer said the lockdown will continue “until at least May 15,” warning that reopening the state too soon could lead to a second shutdown.
Kentucky Gov. Andy Beshear, who will let construction and manufacturing businesses reopen May 11 as part of a phased reopening plan, said Monday the numbers in Kentucky are “really steady,” even with more testing.
In Mississippi, Gov. Tate Reeves has amended his “safer at home” order, allowing outdoor gatherings of up to 20 people staring Thursday.
Saying he knows the virus doesn’t do well in the sun or heat, Reeves added, “to be outdoors is about the safest place you can be.” While lab tests in the US have shown the virus “dies the quickest in the presence of direct sunlight,” the World Health Organization has said “you can catch COVID-19, no matter how sunny or hot the weather is.”
Reeves’ plan also allows dining service in restaurants, as long as the institutions follow guidelines provided by the state, including a mandatory deep cleaning.
“I don’t want to wait if there are steps that we believe we can safely take now to ease the burden on Mississippians fighting this virus,” he said.
This is where states stand on reopening

As health officials and businesses navigate safe reopenings, many communities — and the federal government — have urged Americans to wear face coverings when they’re in public. In parts of the US, it’s required.
But those guidelines have also seen pushback — including last week at Michigan’s Capitol building, where hundreds of protesters showed up, most of whom were not covering their faces.
On Friday, a security guard was shot in the head and killed after telling a customer at a Michigan Family Dollar store to wear a face mask. The governor required face masks in enclosed public spaces in late April. Three people have been charged.
In Stillwater, Oklahoma, an emergency proclamation issued to require face masks in stores and restaurants was amended a day later after store employees were “threatened with physical violence and showered with verbal abuse,” Stillwater City Manager Norman McNickle said in a statement.
And in San Diego County, a supermarket customer wore a Ku Klux Klan-style hood to cover his face and only removed it at the cashier despite having been repeatedly asked to multiple times before, CNN affiliate KSWB reported.