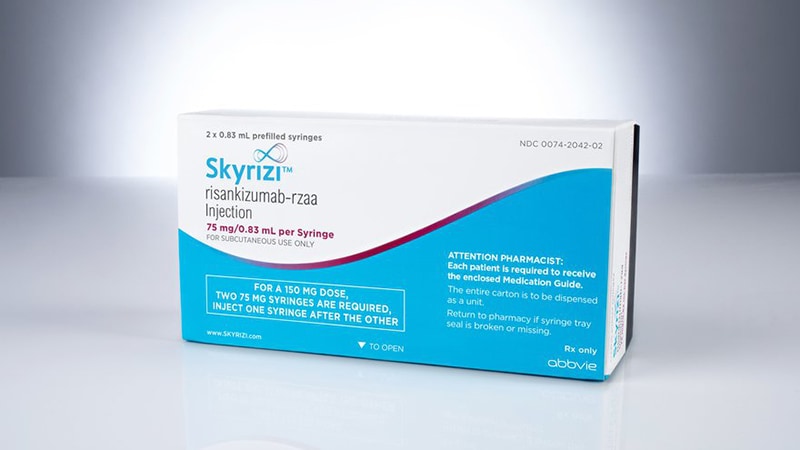 The US Food and Drug Administration (FDA) today approved risankizumab-rzaa (Skyrizi) for a second indication — treating adults with active psoriatic arthritis (PsA) — making it the second anti-interleukin 23 monoclonal antibody available to treat PsA, according to an announcement from manufacturer AbbVie.

The agency previously approved risankizumab in April 2019 for adults with moderate-to-severe plaque psoriasis.

The dosing regimen for PsA is the same as it is for patients with moderate-to-severe plaque psoriasis: a single 150-mg subcutaneous injection four times a year (after two starter doses at weeks 0 and 4), and it can be administered alone or in combination with disease-modifying antirheumatic drugs (DMARDs).

Two phase 3 trials, KEEPsAKE 1 and KEEPsAKE 2, were the basis for the approval. These two trials tested the biologic agent in adults with active PsA, including those who had responded inadequately or were intolerant to biologic therapy and/or nonbiologic DMARDs. Fulfillment of the trials’ primary endpoint of at least a 20% improvement in American College of Rheumatology (ACR20) response criteria at 24 weeks occurred in 51.3%-57.3% of patients, compared with 26.5%-33.5% of placebo-treated patients.

Those on risankizumab also achieved significantly higher rates of ACR50 and ACR70 responses than those on placebo. In addition, patients with preexisting dactylitis and enthesitis experienced improvements in these PsA manifestations. Risankizumab was also associated with an improvement in physical function at 24 weeks on the Health Assessment Questionnaire-Disability Index, bettering placebo by a mean difference of 0.16 – 0.20 points in the two trials. A significantly higher percentage of patients who had psoriatic skin lesions experienced at least 90% improvement with risankizumab on the Psoriasis Area and Severity Index (PASI 90), compared with placebo.

The KEEPsAKE 1 and KEEPsAKE 2 studies are ongoing, and patients in the long-term extensions of the trials remain blinded to the original randomized allocation for the duration of the studies.

Phase 3 trials of risankizumab are also ongoing in patients with Crohn’s disease and ulcerative colitis.