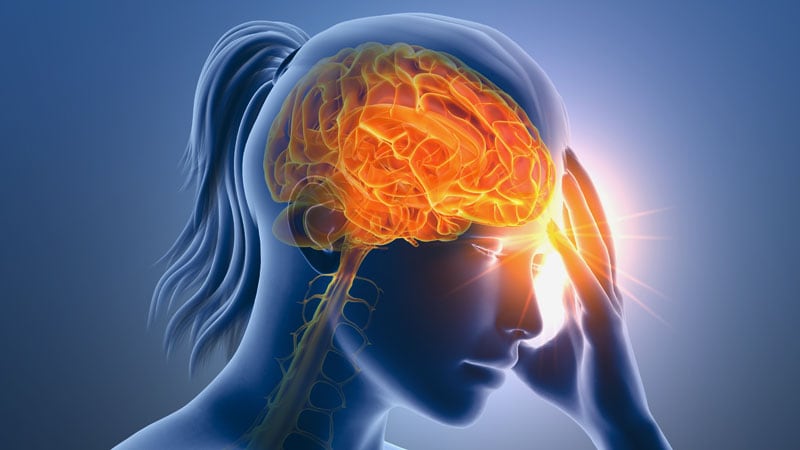 The calcitonin gene-related peptide monoclonal antibody galcanezumab (Emgality, Lilly) compared favorably to placebo for reducing the number of average monthly migraine days in a new study of people with treatment-resistant migraine headaches. ”The patients included in our study had previously tried multiple migraine preventive treatments that didn’t work for them. These patients are left with limited treatment options to help with the debilitating pain of migraine,” said lead author Holland C. Detke, PhD, senior clinical research advisor at Eli Lilly and Company Biomedicines.

Participants who took the drug experienced “a rapid reduction in migraine days starting as early as month 1, and continuing through the 6 months of the study,” Dr. Detke said.

Dr. Detke presented these and other results of the open-label phase of the CONQUER phase 3 trial online as part of the 2020 American Academy of Neurology Science Highlights.

The investigators enrolled 462 adults with episodic or chronic migraine. All participants previously failed two to four migraine treatments because of insufficient efficacy or issues around tolerability or safety. At month 0, 232 people were randomly assigned to galcanezumab and another 230 to placebo injections. At 3 months, 449 participants received a galcanezumab injection as part of the open-label treatment phase.

The decrease in migraine days at 3 months — 4.0 days with treatment versus 1.29 with placebo — was statistically significant (P < .0001). During the open-label phase, participants who switched from placebo “essentially catch up to where the previously treated people were,” Dr. Detke said. At 6 months, the decrease in average monthly headache days was 5.60 in the initial galcanezumab group versus 5.24 in the initial placebo group.

Significant differences at 3 months versus baseline were observed in participants who received galcanezumab when investigators assessed reduction in 50% or more, 75% or more, or 100% of mean monthly migraine days. No such significant decreases were seen in the placebo group.

The results of the study suggest galcanezumab “should be considered as a treatment option for patients who have not had success with previous treatments,” Dr. Detke said.

“It is encouraging that galcanezumab works in patients who have failed prior reduction strategies,” A. Laine Green, MD, a neurologist at Dartmouth-Hitchcock Medical Center in Lebanon, N.H., said when asked to comment.

This study did not look at patients who have failed more than four previous reduction strategies, he added. “Clinically we see many of these patients. To be fair, no one has studied this group using the monoclonal antibodies.”

Dr. Green noted several strengths of the study. The groups were similar, there were few dropouts during the open-label extension, and there were no unexpected side effects or adverse events. “Those who got placebo caught up to those who received active treatment in the double-blind phase,” he said. “It is also nice to see patient reported outcomes improved as headaches improve. This adds consistency to the results.”

One caveat, Dr. Green noted, is “with open-label extensions, there is always the potential for bias because patients know what treatment they are receiving.”

Overall [the study] gives hope that patients who have failed previous reduction strategies may respond to the newer monoclonal antibodies.”

The results are “the same as any other long-term extension study of a drug for migraine,” Stephen Silberstein, MD, said when asked to comment. “The longer one takes it, the better you get.”

The research also confirms that if you switch patients taking placebo to an active treatment, they get better, added Dr. Silberstein, director of the Headache Center at Jefferson Health in Philadelphia.

Because they are injections, agents such as galcanezumab, other monoclonal antibodies, and botulinum toxin offer better compliance for headache compared with small molecule medications that require daily oral dosing, he added.

Eli Lilly and Company funded the study. Dr. Holland Detke is a Lilly employee. Dr. Green collaborated with Lilly on a poster for the AHS scientific meeting on a similar topic but did not receive compensation. Up until August 2019, he served as a consultant for Lilly, Novartis, Teva and Allergan. Dr. Green is also a member of the Medscape and American Headache Society Migraine Steering Committee. Dr. Silberstein is a member of the advisory board and consultant for Lilly.