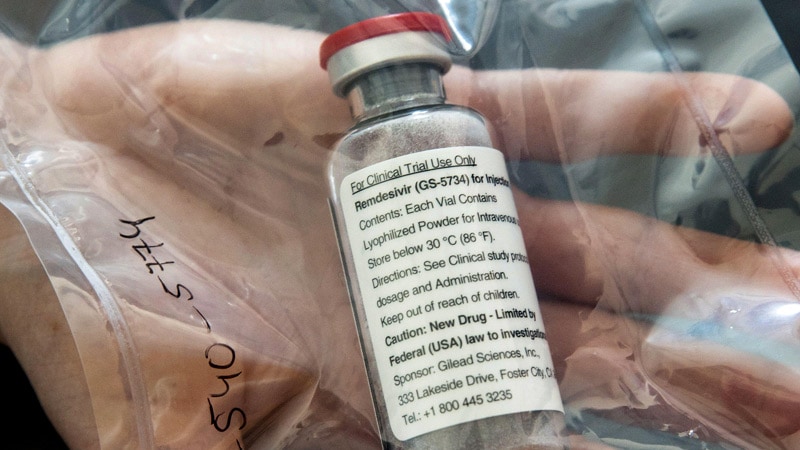 Much-anticipated results from the National Institute of Allergy and Infectious Diseases’ clinical trial of remdesivir in COVID-19 patients published in the New England Journal of Medicine late Friday suggest remdesivir shortens the disease course for hospitalized COVID-19 patients. The agency reported initial promising results from the study earlier this month, which prompted the US Food and Drug Administration to issue an emergency use authorization (EUA) for the drug, but the full data and results have not been widely available until now.

In the study of 1063 patients, the researchers found patients who received a 10-day course of remdesivir had a reduced recovery time of 11 days, compared to 15 days to recovery in the group that received a placebo. The findings also suggest remdesivir should be started, if possible, before patients have such severe pulmonary disease that they require mechanical ventilation, according to the study authors.

The published results are “completely consistent” with the NIAID’s earlier announcement, H. Clifford Lane, MD, deputy director for clinical research and special projects at the NIAID, said in an interview. “The benefit appeared to be the greatest for the patients who are hospitalized with severe disease who require supplemental oxygen.”

Given the limited supply of remdesivir, physicians have been eager to see the full data to ensure they use the drug most effectively, Daniel Kaul, MD, a professor of infectious diseases at the University of Michigan, told Medscape Medical News earlier this week. Hospitals in states across the country, including New York, Michigan, and Washington, have received limited supplies of the drug in the last couple of weeks since the FDA’s authorization.

“I am losing my patience waiting for #remdesivir data. I was willing to give them a week to verify the numbers, triple proof the tables, cautiously frame conclusions. But it’s gone on too long. We are rationing with no rationale. We are floating on whisps [sic] of data, adrift,” Kate Stephenson, an infectious diseases specialist at Center for Virology and Vaccine Research at Harvard University, wrote on Twitter earlier this week. After reading the paper, she tweeted Friday evening that she was “relieved to see convincing benefit — I was starting to worry!”

I am losing my patience waiting for #remdesivir data. I was willing to give them a week to verify the numbers, triple proof the tables, cautiously frame the conclusions. But it’s gone on too long. We are rationing with no rationale. We are floating on whisps of data, adrift

I read the paper and agree completely with this thread ⬇️ in regard to interpretation. I’m relieved to see convincing benefit – I was starting to worry! https://t.co/oPdCauCpTc

In the midst of a public health crisis, however, it is not unusual to make an announcement about trial results before the full dataset has been analyzed, said Lane. The NIAID followed a similar playbook for the PALM trial evaluating possible Ebola treatments in the Democratic Republic of Congo, with the independent monitoring board recommending the trial be terminated early in response to positive results from two of the four candidate drugs.

“When you have a result you think is of public health importance, you don’t wait for it to be published in a peer-reviewed journal,” said Lane, a coauthor of the study. The lag time from announcement to study publication was a result of the time it took to write up the paper for publication and go through peer review,  Lane said. He also noted that the FDA had access to the data when the agency wrote its guidance for physicians administering the drug to patients under the EUA.

The authors opted not to publish the initial findings on a preprint server because they felt it was important to undergo peer review, said Lane. “The last thing you want for something this critical is for incomplete data to be out there, or you don’t have everything audited to the level that you want.”

In the ACTT-1 randomized, placebo-controlled, double-blinded trial, researchers enrolled 1063 patients from February 21 to April 19 at 60 trial sites and 13 subsites worldwide (45 sites in the United States). The remdesivir group had 541 patients, and the placebo group 522. A small number of patients (49 in the remdesivir group and 53 in the placebo group) discontinued treatment before day 10 because of an adverse event or withdrawn consent. When data collection for this preliminary analysis ended in late April, 301 patients had not recovered and had not completed their final follow-up visit.

Patients received one 200-mg loading dose on the first day of the trial, and then one 100-mg maintenance dose every day for days 2 through 10, or until discharge or death. Patients in the control group of the study received a matching placebo on the same schedule and volume. The clinical status of each patient was assessed every day, from day 1 through day 29 of his or her hospital stay, according to an eight-category ordinal scale.

Time to recovery was defined as the first day during the 28-day enrollment period that a patient’s clinical status met a 1 (not hospitalization, no activity limitations), 2 (not hospitalized, activity limitation, oxygen requirement or both), or 3 (hospitalized, not requiring supplemental oxygen or medical care if hospitalization was extended for infection-control reasons) on the eight-category scale. A score of 4 indicated a patient was hospitalized and needed ongoing medical care, but did not require supplemental oxygen; a score of 8 signified death.

Patients receiving oxygen, but not yet requiring high-flow oxygen or mechanical ventilation or extracorporeal membrane oxygenation, seemed to fare best from treatment with remdesivir (these patients had a baseline ordinal score of 5). That may be a result of the larger sample size of these patients, the researchers note in the study. The study authors were unable to estimate the recovery time for the most severely ill patients (category 7), possibly because the follow-up time was too short to fully evaluate this subgroup.

“There is clear and consistent evidence of clinically significant benefit for those hospitalized on oxygen but not yet requiring mechanical ventilation,” University of Michigan’s Kaul, who was not involved in the study, said after seeing the published results. “Surprisingly, early dosing as measured from time to onset of symptoms did not seem to make a difference.”

Kaul said there is still the possibility that remdesivir could benefit patients on mechanical ventilation, but “clinicians will have to determine if the evidence suggesting no benefit in those who are intubated is strong enough to justify using this currently scarce resource in that population vs limiting use to those requiring oxygen but not on mechanical ventilation.”

Site investigators estimated that just four serious adverse events (two in each group) in enrolled patients were related to remdesivir or placebo. No deaths were attributed to the treatments, although acute respiratory failure, hypotension, acute kidney injury, and viral pneumonia were slightly more common in patients receiving the placebo than those receiving remdesivir.

The researchers plan to publish a follow-up study in the coming weeks or months, after the full cohort has completed 28 days of follow-up, Lane said. In future studies, the agency will likely focus on comparing remdesivir to combinations of remdesivir with other treatments, like the anti-inflammatory baricitinib.

5 Favorite Diabetes-Friendly Frozen Desserts
MicroRNAs play a key role in the development of complex brains
The bounty that’s about to launch to the space station on a SpaceX flight
Omicron boosters probably aren’t very effective against mild Covid illness, but will likely prevent hospitalizations, experts say
Lessons Learned From Hiding My Type 1 Diabetes