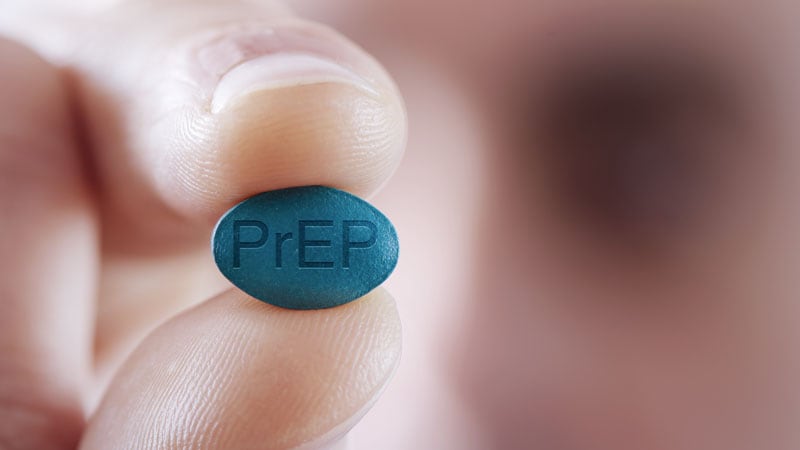 Nearly one in three gay and bisexual men who were diagnosed with HIV at UK sexual health clinics didn’t meet the criteria for “high risk” that would signal to a clinician that they would be good candidates for pre-exposure prophylaxis (PrEP).

And that means that people who appear lower risk may still be good candidates for the HIV prevention pills, said Ann Sullivan, MD, consulting physician at Chelsea and Westminster Hospital in London.

“If people are coming forward for PrEP, they have self-identified that they need PrEP, [and] we should be allowing them to take PrEP,” said Sullivan at the 18th European AIDS Society Conference (EACS 2021). “We just need to trust patients. People know their risk and we just have to accept that they know what they need best.”

And while this trial was made up of 95% gay and bisexual men, that ethos applies to every other group that could benefit from PrEP, including cisgender and transgender women and other gender-diverse people, Latinos, and Black Americans. In the United States, these groups make up nearly half of those who could benefit from PrEP under older guidelines but account for just 8% of people currently taking PrEP.

The finding also reinforces growing calls from healthcare providers to reduce gatekeeping around PrEP. For instance, there’s a move underway by the US Centers for Disease Control and Prevention (CDC), where drafts of updated PrEP guidelines call for clinicians to talk to any sexually active teenager and adult about PrEP.

Between October 2017 and February 2020, a total of 17,770 gay and bisexual men and 503 transgender or nonbinary people enrolled in the trial and were paired with 97,098 gay and bisexual men who didn’t use PrEP. (Data from the transgender participants were reported in a separate presentation.) The median age was 27 years, with 14.4% of the cisgender gay men between the ages of 16 and 24. Three out of four cis men were white, most lived in London, and more than half came from very-low-income neighborhoods.

Participants and controls were assessed for whether they were at particularly high risk for acquiring HIV, such as having used PrEP, having had two or more HIV tests, having had a rectal bacterial sexually transmitted infection (STI), or having had contact with someone with HIV or syphilis.

At the end of February 2020, 24 cisgender men on PrEP had acquired HIV compared with 670 in the control group — an 87% reduction in HIV acquisition. Only one of those 24 cis men had lab-confirmed high adherence to PrEP. However, because the hair samples used to judge drug concentration weren’t long enough, Sullivan and colleagues were unable to assess whether the person really was fully adherent to treatment for the length of the trial.

But when they looked at the assessed behavior of people who acquired HIV were, the two groups diverged. While a full 92% of people using PrEP had had STI diagnoses and other markers of increased risk, that was true for only 71% of people not taking PrEP. That meant, Sullivan told Medscape Medical News, that screening guidelines for PrEP were missing 29% of people with low assessed risk for HIV who nevertheless acquired the virus.

The findings led Antonio Urbina, MD, who both prescribes PrEP and manages Mount Sinai Medical Center’s PrEP program in New York City, to the same conclusion that Sullivan and her team came to: that no screener is going to account for everything, and that there may be things that patients don’t want to tell their clinicians about their risk, either because of their own internalized stigma or their calculation that they aren’t comfortable enough with their providers to be honest.

“It reinforces to me that I need to ask more open-ended questions regarding risk and then just talk more about PrEP,” said Urbina, professor of medicine at Icahn School of Medicine. “Risk is dynamic and changes. And the great thing about PrEP is that if the risk goes up or down, if you have PrEP on board, you maintain this protection against HIV.”

An accompanying presentation on the transgender and nonbinary participants in the Impact Trial found that just one of 503 PrEP users acquired HIV. But here, too, there were people who could have benefited from PrEP but didn’t take it: Of the 477 trans and nonbinary participants who acted as controls, 97 were eligible by current guidelines but didn’t take PrEP. One in four of those declined the offer to take PrEP; the rest weren’t able to take it because they lived outside the treatment area. That, combined with a significantly lower likelihood that Black trans and nonbinary people took PrEP, indicated that work needs to be done to address the needs of people geographically and ethnically.

The data on gay men also raised the “who’s left out” issue for Gina Simoncini, MD, medical director for the Philadelphia AIDS Healthcare Foundation Healthcare Center. Simoncini previously taught attending physicians at Temple University how to prescribe PrEP and has done many grand rounds for primary care providers on how to manage PrEP.

Sullivan reports no relevant financial relationships. Simoncini is an employee of AIDS Healthcare Foundation and has received advisory board fees from ViiV Healthcare. Urbina sits on the scientific advisory councils for Gilead Sciences, ViiV Healthcare, and Merck.

Heather Boerner is a science journalist based in Pittsburgh, Pennsylvania. Her book, Positively Negative: Love, Pregnancy, and Science’s Surprising Victory Over HIV, came out in 2014.

Febrile seizures in children: Key things to know
How to use light to support your wellbeing
The 7 stages of a loving relationship
Maternal anemia during pregnancy may increase risk of childhood anemia
Telemedicine, Triaging, Remote Monitoring Top List of COVID-Era Innovations in Oncology